Typed in a hurry by Unknown 7 comments:
Email ThisBlogThis!Share to TwitterShare to FacebookShare to Pinterest

One block down the road

About three months ago, I had a strange conversation with the land owner where our horses were. He said he was planning to bring in cattle, and our horses would be restricted to their runs.

The gentleman we were leasing from is a little eccentric. He confessed he wasn't happy with our arrangement. He pointed to a pile of his bags and one tub of manure I hadn't moved out yet, indicating we weren't taking care of the place to his satisfaction.

I was taken aback. We had cleaned out trash that he had piled to the ceiling. We mowed weeds up to our hips. We repaired gates, and followed all his rules. Frankly it was getting pretty tough to keep up the place for me since my DH was completely out with another bad back episode that wouldn't let up. With a demanding job I was struggling to keep up with the demands, but thought I was doing a pretty good job.

He pointed to some loose hay in the alley of the barn that had fallen there when we moved our hay inside out of the weather. Seriously? I knew this guy had had manure packed in so tightly in the runs when he kept his horses here that he had to bring in a backhoe to clean up the mess. We agreed to keep the place up, but not to restore it to some mythical barn glory. Seriously, we had to fix the huge door when it almost fell on our heads. We were keeping it up, not rehabbing.

I decided that stressing about this guy's eccentricities was not worth it. He'd never be happy and my horses would become a source of stress in my life when I have bigger stressers (financial, health of DH, demanding job) I've got to manage.

A miracle landed on my shoulder when I found, one block away from my office, a boarding facility with an arena, two round pens, and a price that was unbelievable. $200 a month, I provide feed and hay. It was going to be basically the same price as where we were.

If I only had one horse.

We called our friend who had let us have Cotton as a companion and riding horse. She has her own land, and was happy to take him back. And I moved Lily across the tracks, one block down the road. And the gentleman who takes care of the barn has the same name as my deceased grandfather.

I miss Cotton, but honestly I'm the only horse crazy girl. I can't keep two ridden. Now Lily and I, we just groom and ride. I'm hoping to get out for a few trail rides, but for now we get our quiet time together in the arena and the pasture. Sometimes that's just what we girls need.
Typed in a hurry by Unknown 7 comments:
Email ThisBlogThis!Share to TwitterShare to FacebookShare to Pinterest
Labels: Lily, new home

The Day My Horses Escaped

Quite a bit has happened, I'm down to one horse (it's a good thing, given life's reality), and boarding down the street. But before I catch you up, I thought it would be fun to tell you about the DAY MY HORSES ESCAPED from the barn.

All photos courtesy of google earth.

It was a quiet day. My daughter had come to the office and she and a friend were going to go play with the horses for an hour or so.  I  looked out the office window and noted the gate was open. 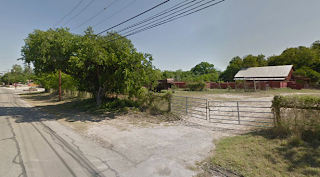 I texted my daughter saying she needed to close the gate.  She said she had it open because her friend's mom was on the way.  That's fine, I texted, but the side gate is open so make sure you close the gate to the street.

The moment I hit send, I looked up. And watched in horror as Lily and Cotton headed for the open gate and the street, heads held high, tails flagged, looking like a pair of wild horses headed for a cliff.

I shrieked and ran out of the building, assuring my colleagues with a shout that I would be right back. (They later presumed someone was injured and two of them headed to the barn. Given that I was thinking of killing my daughter, they weren't far off) 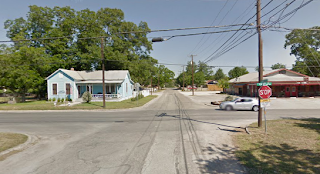 By the time I got out of the building, the girls were running after the horses, who had taken a left turn at the first intersection. At least the horses weren't headed for the train tracks (one half block ahead in the above photo). I ran to the horse trailer, grabbed two ropes ( I noted neither kid had a rope, planning on just grabbing manes, I suppose), and at the stop sign managed to flag down a car. 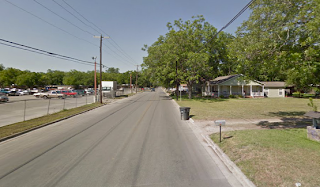 Put yourself in the poor driver's shoes. Crazy woman carrying two ropes runs up to your car and pleads "Can you help me catch up to those horses?"

Yeah. He was awesome.

We headed down the street, but there are several cars in front of us.

This is when I learned an interesting thing. My horses are parade trained. Cars creeping up behind them mean "move forward." All these drivers were herding them right toward a busy street. With a blind hill. 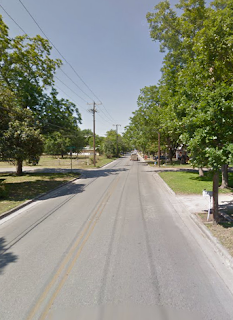 They ignored all the fabulous grazing opportunities. All of them.

The good news is they were just headed at a trot, not galloping like crazy. Sometimes they'd walk. 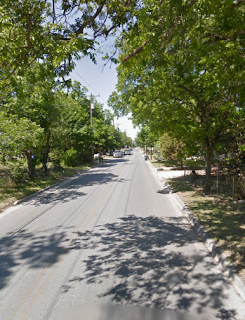 Right about here in the photo above we passed my daughter and her friend, who were in no way able to keep up with the horses.  I was beginning to panic. I could see the cars didn't know they should just STOP. I asked the driver to go around a few of the cars, because we had to reach the horses before they got to that street. 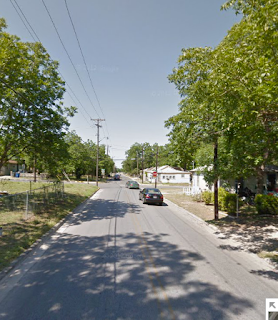 The other cars didn't stop. Neither did the horses. They got to the stop sign above. They started to go to the right and the train tracks. We were about to veer off to go after them, but something must have bothered them in that direction. Both horses switched and headed up the blind hill.

Right about here there was a miracle. Me and the guy in the car I highjacked were passing vehicles trying to get up to the horses. Then a guy in a little black pickup did the right thing. 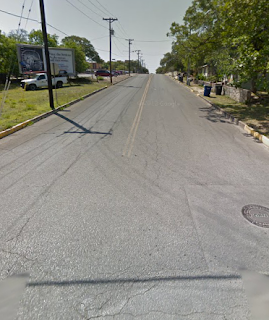 He parked his truck across the road just ahead of the horses, just past the third telephone pole in the picture above (risking getting hit by a car himself). This "herded" the horses into the hospital parking lot. 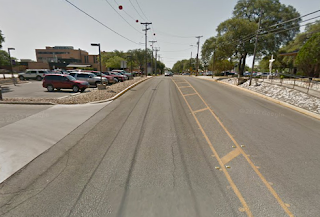 We zoomed up near the parking lot and before it stopped moving I jumped out of the car and ran over. I started talking to Lily. She stopped, and looked over her shoulder at me. "It's about time, what took you so long," she said in her invisible thought balloon. She seemed immensely relieved.

I tied a rope around her and, after carefully explaining to a bystander that she was very, very gentle and wouldn't pull on the rope, handed her off.

Because Cotton had decided he wasn't done. 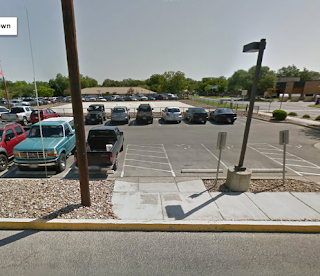 He thought he'd just head back across the street. I caught him next, his head still a little high, but eyes pretty calm. I suspect that without Lily by his side he wasn't up to more running around.

If we hadn't caught them the next stop would have been the water park. And then a golf course. 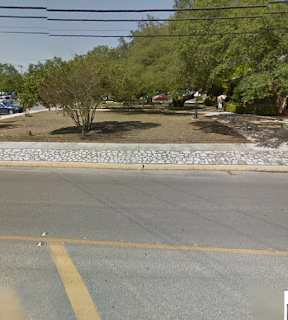 I profusely thanked all our rescuers and when the girls finally got there (completely out of breath) we had a very stern talk during the long three block walk back to the barn.  Lily and Cotton seemed relieved to get back to familiar pastures. They casually strolled over to the water trough, giggling.

At least that's what it looked like to me.