Part 2 Adventures in Trailering and Circles at the Canter

Now where was I?

Oh yes, I was watching in horror as a young lady walked into a herd of seven or so horses with a bucket of grain to catch her gorgeous but too smart for her quarter horse. Trail Rider looked at the pasture where much chaos was ensuing.

"You know what this is?"

He handed me his horse (now I was holding Lily, Woody, and Smokey. I'm good, but I'm not that good. I wandered over to a spot to tie them up) and TR was off to try to make sure no one got killed.

He proceeded to show her how to catch her horse, using a technique Julie Goodnight uses. I like to call it "You are the Last Horse I Want to Have Near Me."

In short order the mare got the message and turned to be caught.

I sympathized, having had to chase my own horse down on occassion. Some women take this pretty personally, in my experience. "My horse doesn't like me!" I know I used to.

These days I don't think it's about being liked or disliked, per se. I'd say there are many, many things potentially going on: pain from a previous session (this horse had been ridden in the wrong bit last time out), bad timing (it's grain time, not riding time), "respect," and sometimes the "don't wannas." And sure, maybe sometimes your horse doesn't "like" you. Sometimes you might not like him either. Like when he's running around a 3 acre field refusing to be caught, for example.

After that and a brief lunging session with another horse, we loaded Smokey and Lily up with Woody and headed over to TR's place to switch out horses. DH stayed back to finish tire repair, and was off for more motorcycle time.

Smokey and Lily dashed around with some concern in TR's paddock, shared grain, and sniffed at the neighbor's horses while we got Lola and Vaquero ready. Lola is the horse with the stifle issue who also tends to be a kicker at other horses. Vaquero is a Paso Fino that TR bought when his back issues were making it tough to ride.

We headed over to the ranch sorting practice at Cibolo. I've ridden there before, mostly just in circles and once helping "push" cattle. I feel worlds away from the rider I was back then. I was so uncertain of everything. Every. Thing.

Now, it's not so much that I'm certain, but I'm not worried like I used to be. When I warmed up Lola in the round pen and brought her up to a canter, I just smiled. There's no fear there. Even though I don't know Lola very well (I'd never ridden her before, other than the brief five minutes a week after TR brought her home), I was confident in my aides, my hands, and in her. 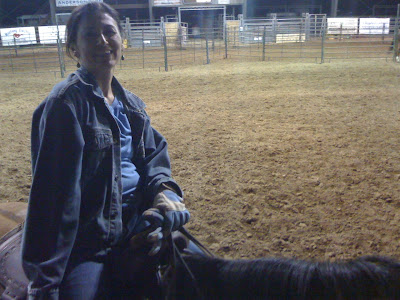 There's no fear. You know, this horse thing is a hell of a lot more fun when you aren't scared.

Don't get me wrong, I still respect the dangers, the things that can happen. I know a blow up can happen on even the most solid horse. But I know it in the same way I know I could be in a car accident. I don't expect it any more, I don't look for it, but I proceed with all due attention without the rigidity that comes from anticipating the worst.

We walked into the arena and met a friend of TRs, A, who was there to try his hand at sorting. He's been taking lessons and TR convinced him to come on out. I would do two rides, since I'm a woman on a budget, A would ride out with TR on a couple. 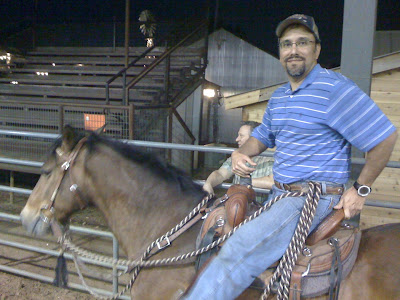 TR on Vaquero, with his uber cool mecate set up.
I had to take back all the mean things I ever said about Lola. TR has been hard at work conditioning her and she rode perfectly. We worked a bit on her buddy sour issue, but it only took a bit of urging from me to get her rolling out (she initially gave A a tough time with this, but she probably realized he was a newbie, and gave him the mare eye roll). TR has high expectations of his horses and is willing to put in the time to get them to their potential. She was a great ride.

TR and I had one awful run, but our second one was much better. We actually got two or three of the calves we were trying for that time! LOL! Given that neither one of us was on a terribly experienced horse, (lord knows the horses didn't have the most experienced rider, at least as far as I go) we felt good with that last run. A had a tough time in the sorting pen, but enjoyed taking Lola out on a ride around the arena.

The best part is that I rode two different horses in one day. I'd have ridden longer if given the option but even the best days come to an end. I felt like a kid that just doesn't get enough, no matter how many hours they spend in the saddle. It was way, way too short.

Since Friday I've worked with Smokey on his canter circles, and while he was a certifiable MESS on Sunday, Monday he wasn't half bad. He was far more willing, and I didn't get any of the really bad behavior (like Sunday when he almost plowed into my daughter at the other end of the arena on Cody). Steering was improved slightly, on Monday I found I'm catching things earlier - less chance of plowing into someone that way), and he is going at the trot collected for longer and longer. I'm figuring out where to hold the reins so he has some contact, but not so loose that he swings his head around in confusion.

I need to remember how much time all this takes, and to take every bit of it (no pun intended). Rushing is no good for either one of us.

And even if I could ride all day, I have to give him soaking time.

We all need soaking time...
Typed in a hurry by Unknown
Email ThisBlogThis!Share to TwitterShare to FacebookShare to Pinterest
Labels: adventure, ranch sorting

Sounds like a great outing! You are so right about "soaking time" - I think horses (and people) learn much better that way.

I agree with Kate and you about the soaking time. I've learned one of the worst things I can do with my mare Sugar is to rush her training. She hasn't been ridden in over three months because of my surgery so we're taking our time getting both of us back into riding shape.

What fun! I want to come play at your place. That think time is sooo important to horses, and to us, so we give them a chance to figure out what we want. I, for one, am not very good at understanding their language, yet we expect so much from them, as if they could read our minds!
Juanita

Sounds like it was a fun day. I love those days that are so cool I never want them to end. Wish there were more of them.

It's great to have one of those day that you wish would never end isn't it? Glad you had such a good time. Love the description of the 'mare eye roll' I think I get that a lot with Dusty.

So many wise tidbits in there. You have made HUGE strides. Good for you. I think getting to ride more than just your own horse is sooooo good for people. It really helps develop feel and awareness...and given the right horses...confidence.

The 'catching' thing is spot on too.

Great post! I thoroughly enjoyed your story, sometimes horses and humans are not on the same page! We always expect them to know what we want them to do but they don't always want to cooperate! Love the blog keep up the great work.

It's so good to see you - especially smiling. :D

Glad you had an awesome day!

Breathe, What a wonderful ride you had on Lola! It sounds like such fun! So glad to see your confidence growing as well- great work you've been doing!

Oh and just wanted to ask, does he have the mecate rope in his belt? Can he not get dragged that way? Or was it just barely tucked in so it will come out? Just curious. It's hard to tell in the picture. :)

One of these days I want to join in on this cow fun! :)

And I think I'm ready for my one handed riding lessons, let me know when you want to go play.

I'm just so happy to hear that it's fun again. That's how it's supposed to be! Frustrating and not always easy but it should still be fun.