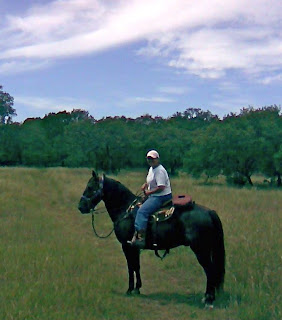 PART ONE: It started out so well.

photo : before the Great Escape

Once a month I get a day off from Mommyhood and get a full day to be self indulgent with horses. So far our group at the stables has taken three all day trail rides and this last Sunday we were set for the fourth. Sharon (who owns the stables and is our daughters' official adopted grandmother) and I were on our own this trip and decided to try out a new place to ride - Guadalupe State Park.

I've been to the park many times, once for a picnic and photo session, another time for a Halloween community party. (We also had our truck fill up with bees once, but that's another story.)

It's a great park, but I never knew it had equestrian trails. Sharon was set to ride out on Rudy's new horse, Woody/Woodrow, since one of her mares is pregnant and the other has a colt running at her heels.

We were also fortunate that we met up by chance with Jennifer Hamlett who has been to the stables a few times and was out there on a photo shoot. She was sweet enough to take pictures of us on our horses, and after feeling a little extra self indulgent posing there for a professional photographer, we rode off.

We had a great two hour ride in the park. We got lost, confused by a numbering system that didn't even exist on our map. The dotted line looked nothing like the dozens of twists and turns we were on. It's also pretty rocky terrain in places, and we gingerly tried to steer our horses around the worst patches like they were a pair of ballerinas instead of 1000 pound animals that wear steel on their toes. Still, it was beautiful as you can see in the photo above - that's Sharon with Woody.

Canyon did really well, although he wasn't too crazy about the asphalt part of the trip. It took a little convincing for him to get past the point the trail crosses the park road. But other than that it was just perfect. We got back without incident, jazzed about the beautiful ride.

Well, see, there was all this grass, and we had already taken their saddles off, got them some water and were trying just to put stuff up. Sharon had her lead rope down and I thought, well, I just need to start the truck...

Okay. Here's the deal. It was hot and we were pretty hungry and tired ...

I mean there was all this gorgeous grass! Why would you, if you were a grazing kind of guy, the kind of guy that leaves your head buried in the hay rack all day, every day, until you had a huge grass belly, why would you even consider ...

Suffice it to say, I forgot one of my favorite sayings: Trust in Allah, but tie your camels at night. Apparently this applies to day time and horses, too.

Before I even made it to the truck door, Canyon took his head out of that yummy grass, looked over toward the road and started to trot off. Then Woody lifted his head, looked at Canyon, shrugged, and trotted after him.

We ran after them, calling. They responded by trotting away from us. Faster.

(I'd like to point out that both of these horses are very easy to catch, come right up to you in the pasture. I've never had to chase either of them down.)

I ran back to the truck and tried to catch up to our crazy geldings as Sharon tried to run after them. For a brief moment it looked like it would all be over. They actually came up to a guy in the parking lot, but since Canyon was high stepping and acting so nervous, the guy declined to pick up the lead rope. By the time we got there it was too late. Canyon and Woody were headed toward the park exit, trotting down the road, dragging their very long lead ropes behind them. Aren't they suppose to STEP ON THOSE THINGS?

I couldn't get it out of my head that this was the same horse I had to turn three times to get him to even CROSS the road an hour earlier. Suddenly he was Mr. Asphalt Runway. We drove down the road trying to spot them. We got to the gate and were told by a pick up truck full of tubers that they had veered off the road back into the woods, possibly discouraged by the cattle guard at the park entrance.

Right then my heart sank. These are thick scrub woods of the Texas Hill Country, visibility in most places is about 20 feet. You can get turned around in a second. We jumped out and ran into the woods, but there was absolutely no sign of them.

Photo: Juniper, Live Oak, Cedar and cactus. And enough rock to break a leg on.