The TETRA rides are walk/trot affairs with folks who are there to just trail ride. No timed obstacles. No vet checks. No goals other than riding together, staying safe and getting your horse out in a big group of horses they don't know. Don't get me wrong, I think the timed obstacles and endurance rides are terrific. But these TETRA rides are low key affairs in beautiful places. The kind of rides people travel for hours, by plane or by truck, the ones ranches advertise in the Trail Riders magazine. They are about not seeing buses, or monuments, or telephone lines. They are about the land, horses, and like minded horse crazy people.

They are not about accidents.

But these things happen.

The plan was that we'd go in my truck and trailer, mostly because of gas mileage. Donna's diesel gets something like 5 meters to the gallon, so when possible we opt for our truck. I ran through my check list: 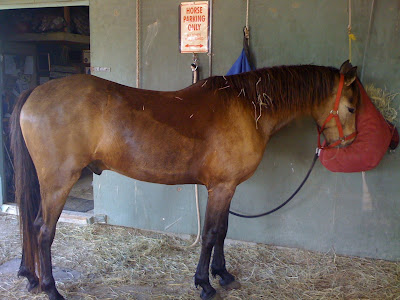 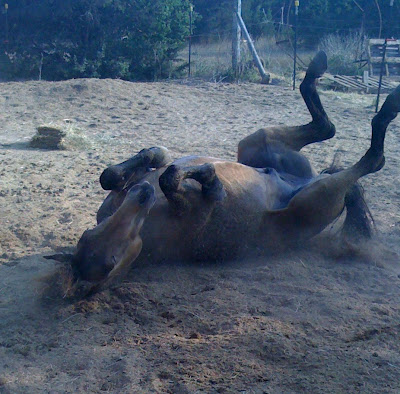 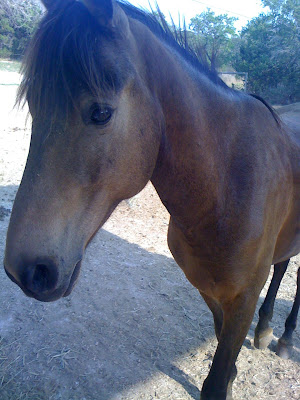 Hey! What's the big deal?
I only rolled on one side this time! 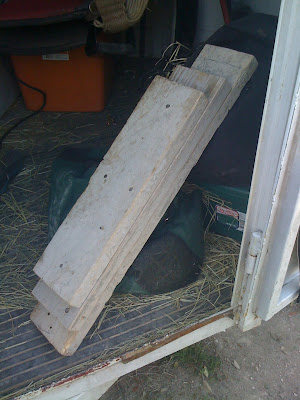 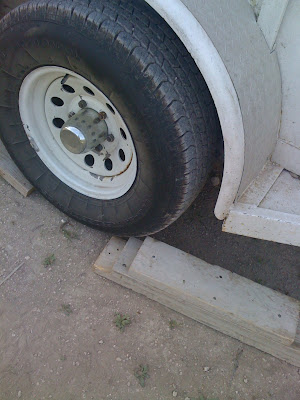 Check! Next month we'll get the other two.
I filled up the tank and was driving back home when I checked in Donna about departure time. That's when she told me she was taking Cloud.

Cloud? I said, a little surprised. Cloud is a terrific horse, but he's a HUGE Missouri Fox Trotter. Easily 16 hands, maybe more. Shoulders like a draft horse. "Do you think he'll fit in my trailer?" 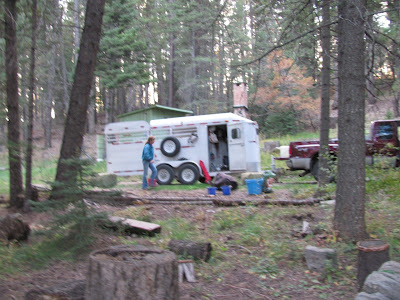 Here's the trailer, which we used to go to NM last year.
The back load area of the trailer is bigger than the front, but a horse has to know to position itself to get it's hindquarters in. It's actually roomy, but with no rails to guide it into position I've had trouble with horses loading there. I wasn't sure how this was going to go.

I imagined a scene from a movie where the big hockey player tries to sit in the elementary school chair while meeting with the teacher. As I recalled, it didn't go well.

I woke up at dark thirty, dropped the kids off with my mom, said bye to DH who was off on a motorcycle trip. I was at the barn right on time and proceeded to load a few last minute things in the trailer. Donna had already fed the horses, and we got ready to load.

Smokey was a little tough to load (again), and I had to wave off help. I'm going to load him repeatedly this week to get this tied down again. But after two attempts, he was in.

Then it was Cloud's turn.

Cloud took one look at the trailer and turned into a giraffe. Part giraffe and part hippo butt.

I'd never seen Donna not eventually get a horse in a trailer.

Cloud wigged out, to put it politely. I was there to try to apply pressure where directed. It was completely ineffective. Twice he knocked into Donna. Once knocked her on the ground. Three times he reared on his way out of the trailer (which was quite majestic, although a little scary given his size. 15-20 minutes of this and it was clear. We weren't getting anywhere.

A little about Cloud. He's Donna's hubby's horse. He gets ridden very little. He only rides (as far as I've seen) in her large 4 horse trailer. He'd been getting bratty, which was part of her reason for getting him out. Also she'd just sold her endurance horse and her horse in training had a pulled groin muscle.

As for Cloud, there was no way he was getting into the little two horse. It was time for plan B. We moved everything over to her trailer, and after a moment, loaded both in the 4 horse. We were running way behind, but still within the window of time needed.

------------------
We got to Storm Ranch through the back way, a way I hadn't gone before. There was a fork in the road and we ended up taking the wrong fork and had to turn around, going back through very narrow, very bumpy cattle guards. After we crossed the second one, I heard a weird noise from the back of the truck.

As I turned to ask Donna what that sound was my mouth dropped. There was the trailer, passing us like an errant ocean liner, headed for the side of the road.

"The trailer - it's passing us!" I said, helpfully stating the obvious.

I watched in horror as it glided by us, heading for a set of oak trees.

To be continued...
Typed in a hurry by Unknown
Email ThisBlogThis!Share to TwitterShare to FacebookShare to Pinterest
Labels: accident, horse trailering

I'm having a heart attack here and my stomach may have sunk to my knees.

Come on! I hope you've decided to post it in installments because the joke's on us, not because you had to hurry to get horses to the vet. I really hope it turns out okay in the end.

WOW!!! Then what happened?!?!?!?
~Dyno
Jeez talk about scary!!!
~Roxie
No way your scaring me but I just LOVE cliff hangers
~Bella

Oh no!!! I hate, hate, hate trailering - it scares me every time and now you've given me something else to be scared of - at least please let us know that everyone - people and horses are okay.

O.M.G.
Please finish the story. It took me a minute to realize you meant YOUR trailer. Don't leave us hanging!!!!

BTW how many people have told you your horse looks like the one in the Man From Snowy River? Dunny!!

OMG! This is awful!!

I have just discovered something about you. You must have a mean streak!

Noooooo! Now I KNOW I'm going to be lying awake-- have mercy & please finish the story! I hope everyones alright!

They call me the queen of the cliff hanger but I think you've got be beat on this one.

omgosh i've heard of this hapening before but always kind of doubted the story - and now you're confirming it.

i love your jack. aarene told me those plastic ones break. and yours probably didn't cost as much.

your horse has the prettiest eyes!

After the whole dental thing I've decided to get my own trailer but stories like this freak me out!

JUST YESTERDAY I hooked someone elses LARGER two horse to my truck (her 17 hand QH won't for my trailer)....I didn't get to measure her ball...I had those thoughts...as she hooked the emergency trailer brake cord-back to her trailer..."a no", I said,"that needs to be on the truck...so of the trailer comes undone, Lord have mercy, it yanks the cord and stops the trailer!"