Clinic - part 7 of a whole bunch 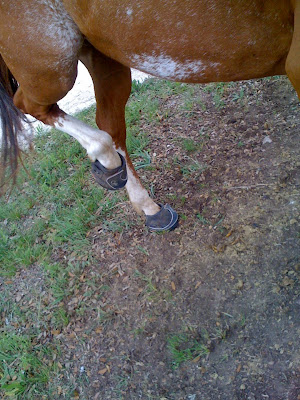 Lily really, really hates her new boots.
She's had them on for about 45 minutes here
and she was still trying to kick them off.
Reminder: the report below is from the clinic I attended weeks ago. When you learn so much it takes time to share...

The black gaited horse joined us the second day. I'm not sure if he was a fox trotter or TWH, but he was definitely a bit of a "Toyota" - little in terms of brakes, much like the horse I wrote about here. But Kathleen, after seeing him move, wanted to try and see if she could get him to lower her head.

A bit of an aside here: Every time a rider came in on their horse Kathleen would say "Well, what are we working on." All but Lou said "I don't know." But Kathleen wouldn't take that - she insisted each person identify what they wanted to work on. This seems tied into the philosophy over all - you have to know what you want from your horse and then figure out how to clearly communicate it.

Anyway, the woman on the black was older, and very much into the field trial dog thing (which I wrote about here). Her horse, while gaited, wasn't very smooth. His head was high, like most gaited horses I see. I was very interested in hearing how Kathleen was going to work with this, since everyone I know in gaited horses tells me they have to hold their heads up in order to gait.

She began by having the woman get the black into the gait, then hold the reins in a position that required him to hold his head down. The rule was that the horse only had to take three strides and then she was to literally toss her reins on his neck. It was to be not just a release - it was a big, showy release of pressure.

The woman admitted what I felt too - it was hard to see from the saddle every time your horse was doing what you asked for. Often times by the time you see it, you've missed the opportunity to do the release. So Kathleen stood in the center and counted out loud. On three the woman tossed her reins down. Initially it seemed to take a long time for the black to put those three strides together. But in time it was sooner and sooner. Then it was time to go the five strides. By the end of the session, the black was staying in his gait with his head low and looking collected.

"And they say gaited horses can't gait with their heads low," said Kathleen with a smile.

John came back out with his big gray. What's interesting is that John's philosophy with dogs doesn't really carry over with horses. He has, from what I gathered (and you can see a picture of him with big gray here) infinite patience with his dogs. There are no harsh words for dogs, and the result is champions in every sense of the word.

So watching him work with his big gray had the other folks at the clinic a bit chagrined.

The gray was now moving over to an actual gate and to say he was reluctant to get into place would be a terrific understatement. He was at a loss - whether it's because he lives behind an electric fence, or just that this was that foreign to him, he was getting frustrated. So was John. Which may have explained what came next. Kathleen had John move his head over to his stirrup to try to keep him from turning on his forehand. After a good 15 minutes of this, big gray got more than frustrated. He bit the boot in the stirrup.

It was time to give big gray a break and they changed gears. So everyone took a step back and went back to moving one end a time, while near the gate. He eventually went through, but it was clear that his few sidepasses were mostly accidental. He was not, from what we could see, connecting the dots.

But with Arch on board, it would all come together - tomorrow.
Typed in a hurry by Unknown
Email ThisBlogThis!Share to TwitterShare to FacebookShare to Pinterest
Labels: clinic report

It looks like this was a very good clinic. I've been reading the posts, and Kathleen seems like an excellent trainer. Since you took such extensive notes, you will get a lot out of it.

Hi there! Just popped by to say hello. I get a lot out of reading your clinic notes. Even though I am nowhere near a horse at the moment, it still gives me ideas for when I next get to ride xxoo

Funny how some can have patience with one kind of critter and not another. I guess it comes from our expectations in the first place.