Up to my ankles 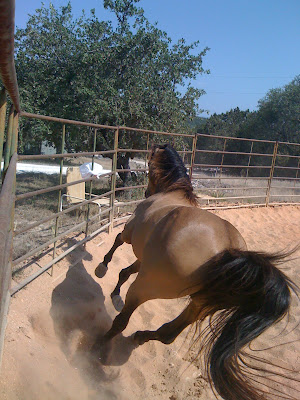 A great joy filled me when I saw that Lisa was reconnected with her mare, Apache.

I admire her, and Val, who recently got back on board after a terrible fall from her steady eddie horse.

This is this silly, crazy horse life. We decide to ride, we who are relatively fragile compared to the animals we ride, who have people around us who depend on us to be here.

I was talking to Trail Rider about his new colt who has some health issues he's grappling with. As a doctor his brain is filled with complications possible as he weighs whether to return the horse, or keep him and risk it.

Over and over again it comes down to these risks. These crazy odds we play in this horse life.

A day or so ago I took one more step on my horse work, one I recognized later in a video I watched. Julie Goodnight was walking someone through proper round penning technique. I was comfortable to see that it was all old hat to me, so I could watch for other things, more subtle things other than what she was talking about. I noted the way she walked in the arena, held her head, signaled.

Then it hit me. My new attitude is about being the same person in the saddle that I am in the round pen.

Bringing Lily back from being basically unrideable to her old self has shown me that there is a connection between the work I do on the ground and the saddle. Some of it was just getter her mind focused.

But part of it, and no small part, was me. And that woman in the round pen? She hasn't been the one riding. If the woman I was in the saddle was the same one in the center of the round pen, that horse would be walking all over her.

So I've been working on being the same person in the saddle.

And what do you know. It's working.

My attention and focus is sharper, my confidence high, my sense of fairness is on track so I respond appropriately and in time. With Lily I work on speed and control. Today we did our longest solo trail ride, her first one out since we've been working. She had two balks, very small, and we went right through them. Riding in a halter. (I have ridden her in a bit, just to be sure she understands that in my hands a bit is not a bad thing).

With Smokey we are working on my faith in him through control exercises in the arena. WTC transitions and neck reining to give me a chance to teach him something. Then, during one of our arena times, we had one of those moments that I haven't appropriately checked before. Caught it, checked it appropriately, not losing my confidence, not questioning if it was the right response.

Because I DO know what to do. I just need to do it earlier, and more consistently. I'm finding the spot where I'm not supporting him, not giving him direction. He plays with the bit because he is testing boundaries, finding big gaps, and the gray is too gray, too wide. I can see it now, and I'm calmer and more confident about what I do know. But I know what I don't know, and am working on getting those aspects better through practice and discovery on Lily.

I feel close to the spot I was before the bolt, and yet, in a strange way, well past it. I am playing the odds again because in my life, in my mind, in my heart, the risks of this horse life remain worth it.

Ride on, my friends.
Typed in a hurry by Unknown
Email ThisBlogThis!Share to TwitterShare to FacebookShare to Pinterest
Labels: horse life, Lily, Smokey

I know you're an encouragement to someone else.

I think good horse people get so used to questioning ourselves (are we doing it right? Does the horse understand? Is there a physical problem preventing the horse from complying? etc.) that we forget that sometimes our horses just really need decisiveness from us. We will screw up sometimes, but that's OK. Our ponies screw up sometimes, too.

It is supremely difficult to get confidence back after a bad wreck! It's really inspiring to read about how you're working through this.

Your new attitude is inspirational. It's fantastic that you recognized that you need to be the same person in the saddle as you are in the round pen. Giddy up!

Slow and steady progress - and Dan's right - you are an encouragement to others.

You're such an inspiration! Breathe on.

I believe that horses have a lot to teach us. I think you're a little deeper than the ankles! Maybe knees!

Thanks for the recognition. I appreciate it. It sure has been a long and crazy roller coaster ride, this horse journey of ours, hasn't it?
We're off, we're on. Lather. Rinse. repeat.

I'm glad we're both back on again, though. Cheers and kudos, my friend.

I think you've got it now. As a rider, if I catch the issue immediately, the horse knows I'm aware of their refusal, and that I'm in charge. In the herd, they get away with very little. And my horses need to know that my expectations of them are high: there will be no monkey business while my fragile cranium is perched on their backs.

I can really see it when a less experienced rider mounts my horses. That horse can go from perfection to testy and balky within just a few minutes. Some horses more than others. I can see my horse test the new rider, and they go from head down and collected and soft in the body, to braced, high headed, and strung out. The partnership is lost.

I think you're on the right track now. You've found the hole in your thinking, and that's most of the battle.

One more thing...ride with people who ride well, and whose ability you can validate by watching them ride different horses and ride them all well, and then emulate them. Ask them what they do for this or that, and watch how they handle things.

I find it's detrimental to my skills to ride too often with people who ride poorly. It helps me to grow as a rider when I ride with better riders.

Even with two broken bones in my leg, I will agree....

Great post. I think you've really got total connection with both horses now.
You're renewed confidence and attitude about everything is inspiring.