Someone else is riding my horse

That's what it feels like these days. And I mean it in the best possible way.


Since we got back from the endurance ride, Cibolo and I have been out on two trail rides around here. We've trotted and cantered and I feel so different, it's like I'm someone else.


Even my friend, TR, said "Who is THIS?" as I cantered ahead of them on our trail ride around the lake. I felt so good, like I wasn't a big ol' drag to hang out with any more.

Maybe I'm not someone else. Maybe it's me and I've just sloughed off that old skin, the one that was filled with anxiety and trepidation, and the woman underneath is simply no longer worried about this horse.

Or maybe I found this girl again: 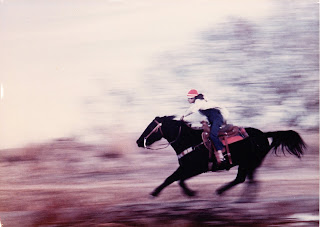 Cibolo seems much more in tune with me. He doesn't nose out anymore, now that my hands are staying centered as I trot. When he resists, we work through it, but I don't worry. He's not going to blow. At worst, he's going to jig, ask to get some energy out. And I can do that now. And he listens.

Before we went out I was working on bitting.

I like a horse to take a bit willingly. Literally open their mouth and say "sure". Kathleen suggested messing with the upper lip to get a horse to bit, instead of the tongue feathering. Cibolo doesn't fight the bit really, but he goes in phases of taking it. Lately I've been able to get him to drop his head for the reins.

Today, he took the bit in his mouth willingly after just a moment. Nice.

I'd like to try bitless as Sydney does, I think he's a good horse for it. He just doesn't like the bit all that much.

But I'll need to sell some writing first.

We got some energy out cantering up a hill this morning, then we walked and trotted through neighborhood trails. There are streams, roads, houses, dogs that charge fences, metal lying around sheds, cedars that need trimming, good places for trotting and cantering, slick rocks you have to slow down on. Great training ground for horses. Lots of hills, narrow trails too.

We all jumped at the dog (he startled all of us), but other than that, there was nothing more than an ear swish.


There are also places on this trail where you are glad you wear your helmet because all of a sudden a low branch whacks you on the head when your horse decides he needs to hop step over a rock on a hill and you weren't quite low enough.

Not a hard thwack, but a nice, solid reminder.

I wish I had taken pictures, but I don't have a good carrying system right now. I hope to order one soon, I'm thinking of this one (click on it if you want to see it attached to a western saddle):

Since the intro endurance ride I've wanted to find something that doesn't bounce all over the place when you're trotting. And it would be nice to have my camera actually with me for a change.


We also did trailer loading at the end of the ride, but I didn't have the time to finish, really. We just worked for 10 minutes. It was good, he went in and stood, and I could see him getting worried. We stood there for a moment and let it go past. While I didn't have time to push him in further to get the butt bar on, we ended on a good note. It's coming along and I'm not in a hurry.

Thanks to everyone who commented on my last post, it's wonderful to get support for taking the long way and not the expediate way. I always feel like I'm surrounded by goal oriented folks who just want me to "get it done already."

Typed in a hurry by Unknown
Email ThisBlogThis!Share to TwitterShare to FacebookShare to Pinterest
Labels: a new rider, tack shopping, trail riding

Sounds like everything is clicking, so happy for you

Wow. . . that is just so awesome! I mean that from the bottom of my heart, I know how you feel. I am starting to feel that way when I ride. "I CAN handle this." Isn't that an awesome feeling? We all have our own journey to this point and it is so worth it! I can't wait to read of more of your great rides!

I'm getting to be more and more confident in the saddle, so I know what you mean about feeling like you're someone else now. I'm not to the "canter ahead on the trail" point yet, but I definitely feel like a more confident rider than I used to be!

As for bitting, you know, there *is* such a thing as *too* willing to take it. ;o) Panama used to literally dive for the bit as soon as I brought the bridle over. I realized after a while that he was rushing because he didn't know when it was coming, so I made up a command ("bit") to tell him when to open his mouth for it. Now we're golden. :o)

That feeling of relaxation and ease is wonderful when you get it - you go, girl! I knew you'd get there once you were down the road a ways.

I'd buy that set of pommel bags if for no other reason than it has a chapstick holder!

"sloughed off that old skin..."? Sound like you have used a strong exfoliant!!! Marvelous! I am so pleased for you. Giddy up!

Wow, that is so great! I'm very happy for you and Cibolo.

Good for you! Sounds like you have lots to be very happy about - that's awesome!

yeehaw! i love it when you just really connect with a horse on a ride.
- The Equestrian Vagabond

A word from the "been there, done that, killed two cameras that way" perspective: carry a camera ON YOUR BODY. Not only is it easier to reach (so you will take more pix!) it's also much less jiggling for the camera. The continual wiggling motion of a saddle bag--even when it's strapped down tight on a gaited horse--is deadly to the little motors inside cameras, and they stop working. Your body-- even while posting on a trotting horse--makes larger and smoother motions that don't bother cameras so much. Pockets and fanny packs are your camera's friend.

I do like that set of saddle bags, BTW, and I have them on my saddle. Purple, of course. You can use the chopstick holder for a flashlight or glowstick if you don't plan to stop for sushi along the trail!

most awesome! Good for you!!!!

Don't worry about al lthe the ittle things, have fun, enjoy the ride and your horse will take care of the rest !

The more you over think, the worse it gets!

Yay! I'm so happy for you! I can feel your enthusiasm and can understand how you feel as we travel similar paths.

During our last trail ride, when we were trotting and cantering something just clicked and it was like I was different and so was Apache...but all in a very good way.
It's as if a door opens that has been closed and you couldn't find the key...and then....voila, you find the key hidden behind some bushes and you find that when you turn it in the door lock that everything just clicks!

I'm finding that I'm just beginning to trust Apache, that she really isn't waiting to pull some grouchy behavior so that I'll consider giving up and dismounting, like Baby Doll always did to me.

I still have a brief 10 minute adjustment period when I'm mounting and just after, and I hope that goes away because Apache doesn't deserve my nervousness as she's done nothing to scare me or make me feel like I shouldn't trust her.

I'd like to try the bitless bridle on Apache, too, but probably not the Dr. Cook's like I used on Baby Doll. I wasn't satisfied with some things using it.
But Apache goes great in a bit and is so soft and eagerly takes it into her mouth every time.
Maybe she's just relieved that the bit I use is so mild (french link), compared to what she had before?
But I bet she would go great, too, in a bitless bridle.
I'll try if you try? :)

So, when are you and Cibolo riding in your next endurance ride?