Round pen - back to the beginning 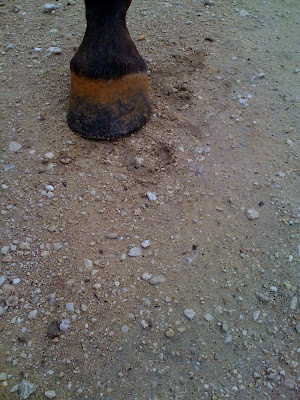 Remnants of the round pen.
Back in the days of my bucking bronco, I worked a lot on ground work. I learned the Seven Games of Parelli. (You can read about them here, you can watch them below.

(this video is worth watching if just to see the foal play
with the umbrella about 5 minutes into it)
Then I worked on adjusting my round penning into the "bonder" based on Marv Walker's techniques (an interesting conversation about it here).

Then in the clinic I worked on containing my horse at the walk.

So with all this under my belt I felt like I could do anything on the ground with a horse. We could create a complete meditation circle from hoof prints if we wanted.

So why couldn't I get Smokey to "Join Up"? Why did I feel I was losing my brown belt ability?


Frankly it's part of a theme that's going on. There are a few realities of having a young horse that keep coming up. As good as he is, he simply does not get stuff yet because he hasn't done it for years in various situations with various people.

For example, while he's been worked in the round pen, it's been by one person. Something that I was doing was subtly off. Even when I saw the trainer, D, work him, he didn't quite come around like I'd have expected. He was inconsistent in his reactions. 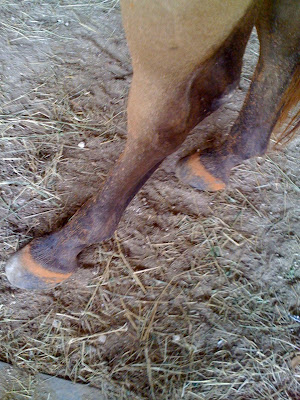 He'd react in unexpected ways, raising his head at times he shouldn't. With me, he'd stop and look at me, then turn when I didn't ask. WTF? And when I got after him, he just spazzed. And not "good, he'll learn a lesson" spazz. The "I'm not listening to you cuz you are so weird!" spazz.

It was time to think more about what I was doing and explore what I needed to change. Since I had been watching the Chris Irwin videos (you can find here), I have been impressed with how extensively he explains things. Some times it feels a little ad nauseaum, but really, by the end, you GET it.

So I watched his round penning video. He is pretty harsh on existing round pen techniques. He works more from what you do with your core - and it carries over to saddle work as well. (my rein technique is getting better too, thanks to some of his suggestions).

Based on what I saw, there were several things I was doing wrong.


So for the last two sessions we've done round pen work. Once just the round pen, and today a session before riding.

And each time he joined up. 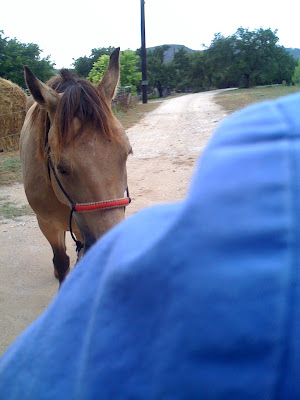 Progress. :)
Typed in a hurry by Unknown
Email ThisBlogThis!Share to TwitterShare to FacebookShare to Pinterest
Labels: you can always learn something, young horse issues

It's always interesting to hear about round pen work - it's a mystery to me since I don't do any of it. Glad you're having fun with it!

The subleties are easy to miss. It really does take a long time to learn the techniques properly and it is so much more about body position than a person would think.

I'm getting a refresher coarse myself. It's been fun watching the new trainer work with Bugs.

Round pen work can be fun. I just wish it always carried over into the saddle. So many people claim it does, but after all the time I spent in the round pen with Baby Doll and feeling like we had connected and were communicating smoothly....then I'd get in the saddle and it was like I was on an entirely different horse.

I don't do round pen work with Apache, but I do move her feet every chance I get....forwards, backwards and sideways.

I still think it's neat the work you're doing with Smokey, because you're building a bond....you're teaching him about yourself and what you expect, and he's teaching you how he interprets what you're telling him.

Gotta love progress.
At work, I have to bit quite a few horses in the round pen, and I have learned so much on body position. It really has helped me for working with my filly at home!

Progress is good! Have fun!

I'm glad you found out about Chris Irwin (Candian, eh!) He' really does explain things well. I used to live about a mile from Riversong Ranch.