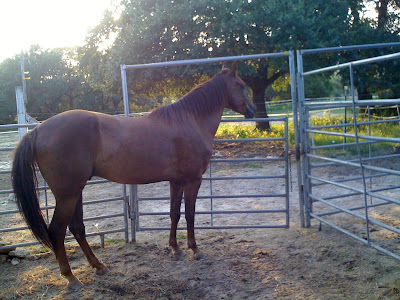 This is Yeshio. He's the Andalusian I referred to the other day. FV asked for a picture.

He is just beautiful, unfortunately at this point in his development it's only skin deep. Today it was my turn to feed and I decided I'd take on some of Yeshio's annoying traits.

Like banging on the gate, demanding to be fed.

I decided to take a page from Chris Irwin who says you should never feed a rude horse. So when he banged on the gate, I took the wooden part of the pitchfork and banged much more loudly back. He didn't like the sharp sound and danced back.

I went on my business, getting the grain organized and getting ready to feed. He banged again. I banged back again, more loudly. He scooted back. When he dropped his head, I took the pressure off and dropped his grain in.

When he waited for his hay he began pawing. I raised the wooden handle (not in a threatening "I'm going to hit you" way, but in a "this is my head and it's higher than yours" way). He stopped. He regarded me. He stopped pushing on the gate. I could feel his impatient energy change, into what, I couldn't quite say.

I fed him and told him he was beautiful. 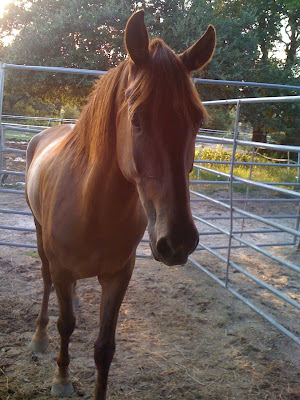 I decided to do this because I get the feeling he's passing on bad behavior to Smokey who started chasing Lily off her hay and pawing. He doesn't do it in front of me, but Steph mentioned it.

I don't know if Smokey is just coming into his own, or if it is the dynamic of a new horse in the herd.

I've noticed dramatic changes in herds when a single horse is added - and not just in regards to that horse. We had an alpha horse in a pen that is in the center of a paddock. The other, established alpha became a huge bully, putting some serious bites on everyone else in his herd. It was almost as if he was frustrated at not being able to herd the horse in the pen and took it out on the others. Or perhaps it was a form of showing off.

I see this and I think of how challenging it is to build a stable (no pun intended) herd and I wonder when we get our own place what is the best set up to be able to separate horses, yet let them be a herd.

I've recently decided that I need to focus on where I want to go and what I want it to look like when I get there. Want to come along?

I spend some time day dreaming about the best set up for a relatively low maintenance layout, one where you can have horses turned out 90% of the time, yet easily separate and protect them from the weather. I mentally review the dozens of places I've seen in the last three years, mulling over the pros and cons of each. My favorite is probably the layout at our old barn where the pipe runs connected to the paddock. It looked like this: I'd like the pipe runs to be like the beautiful ones where Cibolo used to live, limestone rock walls, and beautiful wooden ceilings and metal roof, with a wooden name plate on every run. (Dream big, what the heck!)

PS Smokey now loads fine. I had the BO help me get through the last of the resistance - getting him in the right position - and he's back to normal. Now I have to make sure I load him every day.
Typed in a hurry by Unknown
Email ThisBlogThis!Share to TwitterShare to FacebookShare to Pinterest
Labels: dreaming, herd behavior

I'd definitely have more hay storage and use that first area for a tack room. I like my barn aisle for grooming in bad weather. Ideally, I'd have an indoor arena too.

Oh yeah, thanks for posting photos of Yeshio. He is very pretty.

Good job with Yeshio. My filly Velvet gets impatient and rude sometimes; I'll have to remember this. Your ideal barn looks pretty good; mine would be similar, but with an alley that runs along the stalls inside for feeding and tacking up. Hay at one end, tack room at the other. Wash bay in the middle.

Good work with Yeshio. Dixie (and all my previous horses) learned that only pretty ears and good behavior equals food.

I'm not much good at the ideal pasture layout question - I am having enough trouble getting a ONE horse pasture together!

Yeshio sounds just like Fritzy. The impatient pawing at feeding time, actually Fritzy does that all the time. It is so annoying, and yes they can pass it on to others!
I would just love to have a barn, period. I only have run in sheds with pastures. I'd love a barn, with paddocks that can be opened up to the bigger pastures. Just having a barn is all I want, I would probably never leave it. Plus then I would finally have a tack room! My garage is my tack room and I just don't have any space, it is getting crowded now since I have 3 horses (but tack for like 6 horses) and my sister keeps all her stuff in the garage too. It pisses me off everyday. And I am so organized but it's not just horse space. I need my OWN horse space!!

I go through 'rude' periods with most of my bunch. Particularly Moon. Oh, he is awful. Trying to get him to behave mannerly just doesn't work. I just make a point to feed him first. I know, I know! But he is 12 year old and has been this way his whole life. He just isn't going to change. :(

I've been trying to figure out a plan for the new property. It's tough. Myself, I even though it is time consuming, I do prefer having to lead the horses to pasture and back to their pens. It has made catching everything so much easier. They are never quite sure whether I am bringing them in for food or riding. LOL

ideally my horse would live in my house with me.

but since he's not housetrained, i'd prefer that our house and barn were one building, like so many horsefarms here in germany.

and what i would change about our current place - i'd have another horse here and finish our paddock paradise track system so they would move each other around all day.

I would love a barn, preferable an old wooden one, but probly not gonna happen in my lifetime, so our large psture situation works well with a few corrals we can seperate some horses if we want. I also prefer to lead my horses to pasture, so I probly wouldnt have pens attached to the barn either, but an arena would be nice :)

Yeshio is so pretty. I'm with you, though, and do not tolerate such rudeness. Good job!

Good job with the rude boy! My dream barn... anything that keeps my horses on my property.

Story, Creative work with Yeshio! And great work with Smokey also! Your dream barn sounds wonderful; I like the idea of an internal aisle if you can add it. Hope you find it, or get to build it, soon! :)

That Andalusian sure looks like Woody...just bolsters the BO's belief that Woody is INDEED an Azteca.

VERY good work with feeding Yeshio. I won't feed mine unless they show manners, too.

Only thing I would add to the turnout pasture would be trees, big strong ones. So the horses can scratch, and so the less dominant horses have an obstacle they can use to distance themselves from bullying.

So what's the deal with Yeshio's owner? Does he get worked with and trained by his owner, or are they hands off?
How old is he and is he broke?

As for a barn, mine is ok. I'm grateful to have it. But I wish it was closer to my house. I'd even be happy if it was attached like a garage. Wouldn't that be great to just step from your home into the garage?!

Right now I'm also wishing for our barn electricity to get fixed. The gophers chewed through the underground wires in the Spring and we've been without any electricity since then. I often feel like Helen Keller when I'm preparing grain or gathering my tack in the dark.
The previous owners of this house were stupid and didn't bury their wiring inside hard sided pipe. They also didn't bury the water lines deep enough below the frost line, and that first winter after we moved in our pipes to the barn froze and burst when we had below freezing temps for over a week! What a mess having to haul water up the hill....and we only had the llamas then. I couldn't do that now. That hill can get too slippery in the winter to be hauling up heavy water buckets.

Good luck with your barn plans.