Horse? What Horse? How about a Crib Note?


Tis the season of the birthday parties here (Dad and both daughters) and that means Momma has no time for her four hoofed kids. It showed when the farrier came. Lily was fine, Smokey was a brat - but he was just bored. We got it done, but fun it was not.

Plus its hot enough to smelt copper.

Hopefully this Friday will give me some horse time. Until then, here's a Crib Notes to get you laughing... I'm going to post part one of what is the tarantula trajectory: 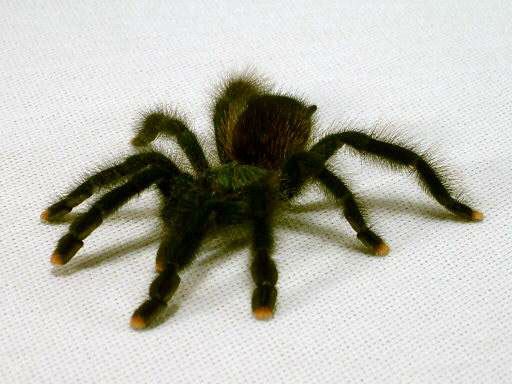 Not our tarantula, but definitely her twin sister. Or brother.

First, some background. Our adventures with tarantula started on the last week of school:

Our youngest daughter, the one who still runs from moths, volunteered to take home the class pink-toed tarantula. Since I consider this one small step on ridding her of her bug phobia that has made spring such a delight, I agreed. This is despite my rather spotty record with tarantulas (I wrote about the wild tarantula incident four years ago, drop me a line if you’re really curious).

This sudden desire to have a large hairy spider for the entire summer was my first indication that the bouncy princess I have been dropping off every morning was being replaced by someone else entirely. Someone who didn’t mind having a tarantula and its prey - jumpy, noisy crickets which are ALSO bugs, by the way – acting out the cycle of life in her room.

Now let's fast forward to June for a Crib Note titled "When the Crickets Chirp":

So far our tarantula sitting duty has gone exactly as expected.


If you ever find yourself having to buy crickets to feed a tarantula, remember, size is everything with crickets. In our case, I bought ones that were so small, they escaped their containment box. I managed to keep this hopping, jumping, buggy problem hidden from my children until I rounded up the escapees and taped up their enclosure.

I didn’t disclose the cricket escape because there would have had no room in our bed for adults to sleep since the kids would be too freaked out to sleep downstairs. Then our pet sitter and friend, Steph, thought the tarantula escaped while we were on vacation. When the news leaked out, it looked like we’d have to relocate upon our return since there was no way either kid would come back into a house with a loose tarantula.

Fortunately Fuschia, the renamed pink toed tarantula, was merely hanging out in a thick part of her web tunnel. On our next cricket acquisition trip I got a more appropriate sized crickets. Just one problem. Bigger crickets really make lots of interesting scurrying noises in their box. I was upstairs working when I heard a crash. We looked around but didn’t notice anything amiss.

Then, while I was outside I got a call on my cell phone – from inside the house.

“Mommy?” Mireya’s voice was so small, I had to strain to hear it. “There’s a cricket loose. I’m hiding upstairs.”

I rushed back inside to find both girls hiding out upstairs, and the entire box of crickets turned over in the living room. The cat was staring under the couch, twitching his tail nonchalantly, attempting to maintain an air of plausible deniability.

Fortunately, the crickets were easy to catch. Each one had suffered mild injuries during their cat encounter and full on hopping was no longer possible. It did mean a Saturday filled with sudden screams of AAAHHH!

Another issue is once a cricket gets to a certain size it can chirp. Chirping crickets, which has always been a signal to me to relax, are having the exact opposite impact on Mireya. Chirping crickets mean there are bugs in her room, which FREAKS HER OUT.

Who knew tarantulas only feel the need to eat periodically, and until then there’s chirping and therefore a little kid in our bed upstairs.

So, in case you’re considering adding a pink toed tarantula to your world take my advice.

Get a pet rock.

Typed in a hurry by Unknown
Email ThisBlogThis!Share to TwitterShare to FacebookShare to Pinterest
Labels: crib notes

You could keep the spider in your room along with it's larder, and that might get your bedroom back.

Might end up with a whole host of other issues, though.

That's great. Being a little freaked out (ok, a lot freaked out) by spiders, I would never consider letting a big, hairy one with manicured toes into my house in the first place. Second, I can't sleep when I hear a cricket chirping. We have 12 foot ceilings with a tile floor in our living area so their little mating calls resonate pretty loudly. It's them or me.

R ya ready for school to start so Fushia can go back?

No need for any advice. I have no desire to add any species of spider to my menagerie of critters, especially not in my home. gah!

Spiders dont do it for me!!

A Work In Progress said...

My daughter, rather unfortunately, isn't bothered by bugs. So far I've been able to keep most of the creepy crawlies she finds from taking up residence in the house, but I know she's going to eventually sneak something in. Now I know what I have to look forward to. Blech!

What a stitch. You really must be brave, I would never have a tarantula in my house. Just the thought of that makes my skin crawl.

Hopefully all of your insect, are spiders insects, friends will be heading back to school soon.

Have never laughed so hard at a blog post. Seriously.

Oh my. I started chuckling at "...I bought ones that were so small, they escaped their containment box.” Then I started laughing when I got to …..”Mommy? ....“There’s a cricket loose. I’m hiding upstairs.”….. And by the time I got to “Get a pet rock” I was guffawing. Thank you!!

Oh, that's funny! I'm laughing with you, not at you. I will take your advice seriously. I'm actually quite fascinated by spiders. I considered getting a tarantula once, but I don't want to feed living things to another living thing.

The spider doesn't bother me I think the chirping would drive me crazy though. Wonder if you couldn't relocate Fuchsia somewhere that doesn't bother anyone...like a laundry room. Bet you can't wait for school to start again.

holy crap! i have to say we have this little chirping cricket outside our bedroom window and it's lovely but sometimes i get fed up and say to my man, "can you please go out there and stomp it to death"?

we don't have the lovely frog/cricket symphony that i hoped to have as part of living in the country. it's just one or two at a time which is really dissonant.

about that spider. i tried really hard to look at the photo and not be paralyzed with fear.

then your post made me recall my sister's experience. she and i have bug phobia, but she's even worse. she's like an arabian horse if she sees a bug - she has tried to run right through a table that she knew was there. so when she got a job at petsmart the challenge was the cricket selling section. she just couldn't reach into the box of crickets and sell spider owners these bugs. she was fired for this.

i couldn't have done it either.