The Scary Garbage Can

We went out for a ride today. But before we could get to the ride part, Rudy had to empty out his saddle bag in the trash can behind Canyon.

Now we've dumped things in the trashcan before. I'm always tossing his hair in there and he does just fine. But this time there was a little cascading sound (which I'm sure could have been the sound a lion makes just before it eats horses) and Canyon pulled back, snapped the little cheap temporary carabiner and stood back about three feet.

It's been a long time since he pulled back.

Woody was calm, I remained calm, Rudy remained calm. Canyon stood there, a little worried, but calmed down. I put his bridle on since I don't have anything to hook his rope to without that little carabiner.

Rudy pointed out that this was an indication that this spookiness is just his personality. That it's not something that I can change. After all Woody didn't react at all.

I probably can't change this part of his nature. But I can't get past the idea that I CAN do something.

We talked on the ride about how some people naturally over react. How they can't get their emotions under control even in the most minor of circumstances. 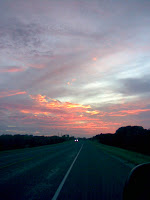 I've lived with people like that. And it's true, it's their nature. But given tools, those people, particularly the ones who don't avoid everything that bothers them, come down from a level 9 freak out to a 6 or 7.

Would I rather have a horse with no freak out? Sure. In fact, if I had more than one horse to ride, I'd probably not ride him much. And that would be terrible. Because this experience has made me a better rider. I have to be precise in my communication with Canyon because he is so sensitive. I have to pay attention to his emotional state because when it is changing I need to be on it immediately.

Sure, I could have an easier horse.

But I don't. I have a horse that requires more of me.

Some folks have a different name for this kind of horse. I believe it's "Alpo."

I just call him my crazy boy. I always went for the crazy boys. The ones that fell outside the norm, the sensitive poets, the dreamers, the ones not on the team but wandering off by themselves.

Why should it be different now? Because I'm older and know better?

(the sunset above was on Thanksgiving as I went to the stable to deliver a few holiday carrots.)
Typed in a hurry by Unknown
Email ThisBlogThis!Share to TwitterShare to FacebookShare to Pinterest
Labels: spook

LOL!!! I have had run-in's with scary garbage cans before too!!!

I agree with you about being able to bring Canyon's anxiety level down a notch or two. The more experiece he has, the more it will come down, and while he may be a more reactive horse, his reaction time will eventually slow down.

Maybe a year from now he will just lightly jump/twitch when the garbage can attacks?

He is definitely not Alpo!..lol!! Hotter horses do require more time, patience, and energy, but it often pays off. :)

I'm glad to year that. Since we are approaching our one year horseyversary and I do think he's better, I am glad to hear from your experience that there is hope.

I don't think of Canyon as hot, but I tell you what - he is NEVER a dead head. LOL. Run? Yea! Let's RUN! NOW AAAAAAHHHHH!

You know Abu used to be a loon (jerk) but I found that the more I traveled with him the less it became. He will still be naughty but what I know now is that it is generally in trying to evade work!! Canyon will come along. I have also come to see that with Abu if I let him investigate the scary thing in his own way he generally tends to forget about it in about 25 seconds. Canyon is smart and athletic, a combo I know well. Time will help. How old is Canyon??

Canyon is 11, and I got the impression he had scared his previous owner (not that she told me that when she sold him to me). She had him for 7 years. I found out through the horse grapevine much later that she had tried to show him at a sale and he threw her. It was a windy day, apparently and she didn't warm him up. But I think he got away with quite a bit for a while.

I let him investigate stuff, but he tends not to want to. So sometimes I force the issue a bit with the ultimate temptation. A little baby carrot on top of the scary thing. He's been much more willing since! LOL.

More saddle time is a big part of this. but I do think I've got the bond going. Only took about 7 months. :)

I got to your site from "Our First Horse" (I am an avid fan of theirs, also). I wanted to tell you I enjoyed reading your story from the beginning and laughed through a lot of it as I have lived (and am still living through) many of the experiences with my 14yr old Quarter Horse/Arab cross. She acts more Arab a lot. We went riding on Wednesday (Before Thanksgiving) and she wanted to 1. run away with me on the way home, 2. Spook at the pile of rocks on the side of the road, and 3. Trot through my "whoa". I had to go the long way home to keep her guessing and do many, many, many one-reign stops.

We live in central Texas, between Waco and Bryan and have friends that live in Canyon Lake. (Though I have never been.) Read my blog if you want. d2cranch.blogspot.com

OMG! Canyon should spend time with Janow! Janow loves garbage cans. He has DRAGGED me to garbage cans so he can forage for something to eat. He has spooked horses by pulling his head out of garbage cans. I try not to let him search the trash. Could be dangerous.

Kirkland,
I will definitely check out your blog. Sounds like you need to haul to the lake for a trail ride! It's more fun when it's a bit warmer, though.

So I guess there's not much chance Canyon is going to outgrow this thing, aye? Well you know what they say, Whoa is just another word for "GET THE HECK OUT OF THE WAY!!!! CRAZY HORSE!! CRAZY HORSE!!"

Oops, that last post was from me, not sure why Adam came up. LOL

Cara, you have got to send me a picture of that! How hilarious! Perhaps he was an avid recycler in a previous life!

My mare is mostly bomb-proof, but even she will spook at loud, crazy noises going on behind her. It's been really good for me as a nebie rider to work through those spooks because it makes me live in the moment and be on calm, focused alert ready to handle the situation and get us back on track, so my horse trusts me.

I agree with you that sensitive horses make us better riders.
My horse is just sensitive enough in that she makes me take a few steps out my comfort zone, and I'm grateful for that, too :)