(Warning, some gore in this one - picture of Lily's boo-boo below)

Courage and lack thereof:
You know, I've been a pretty major chicken lately. But today I made progress. I cantered in the round pen.

It's the first time I've cantered on Cibolo since we got him, and I have to say, it was like a ten ton load of tension was gone. I didn't do much because I was pressed for time. But two rounds of cantering after none? I don't think my feet touched the ground.

I get irritated at my hesitance to canter. I think I should be doing all this stuff immediately. There should be no delay. I'm a grown up, after all. I'm pretty fearless in most things. This is a different horse and I know what I'm doing.

But I haven't been able to get enough saddle time and felt like I had no seat at all. I had no confidence in my cues.

Today Cibolo was in a great space. He went through his gaits perfectly in our round pen session, no nonsense. I didn't even use a bit and he was so responsive that I was backing him with no effort.

So I'm pretty relieved to be through this hurdle. Maybe not all the way through, but at least on the way.

Lily's cut looks worse. I hydrated it, used peroxide, put some wound cream and swat (I gave her a bath too).

I just don't think it's getting better. Any suggestions? What's your favorite wound cream/salve for something like this? 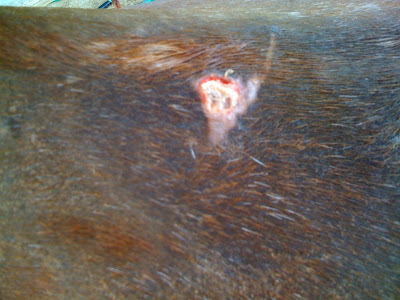 Sierra hasn't been out to work with her and it shows. She misses her, and just doesn't a good connection with me. She's like - "oh. it's just YOU." LOL

On the up side, her mane looks longer. That's the only thing about Lily that's not beautiful, she has a sort of straggly mane (I've seen a lot of QH with straggly manes, I wonder if it tends to be more common in that breed). But I think it's getting longer! 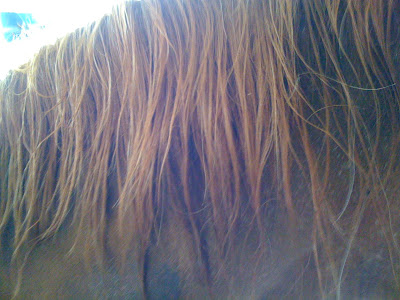 I've been using this (which smells like bacon and sulfur). 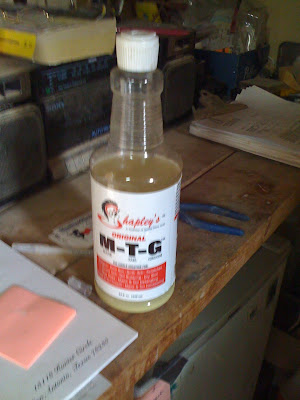 Her mane looks longer to me. But maybe it's just my imagination. It's not like I had the forethought to measure it. 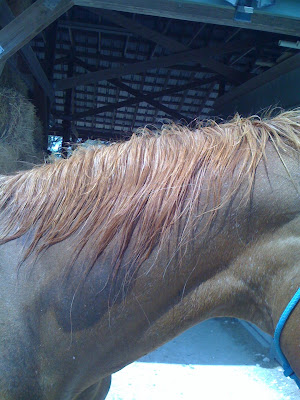 Even her little forelock. Isn't it bushier? 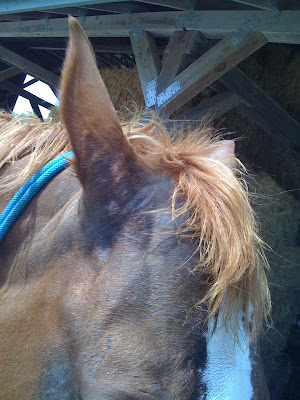 Speaking of growing things, in celebration of the second day in a row of less than 100 degrees, I potted some plants. 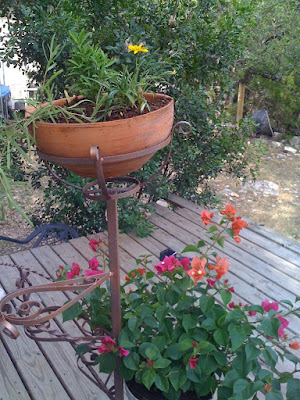 Pray for their survival. I've got a bad rep with plants. 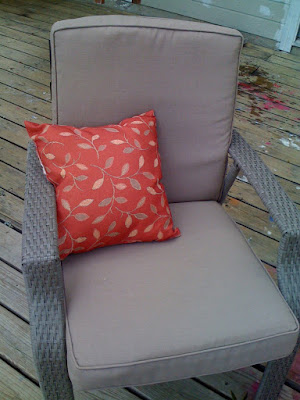 Hope you had a great Sunday.
Typed in a hurry by Unknown
Email ThisBlogThis!Share to TwitterShare to FacebookShare to Pinterest
Labels: cantering, Lily, OT, round pen

Don't know about the wound - it's hard to tell from a photo.

Glad you cantered - he sounds like a very sensible horse and one you should do well with.

My old QH has always had a somewhat scraggly, thin mane and tail, but so does my TB mare - so who knows? Warmbloods and WB crosses seem to get the thick manes and tails - but then I had a TB mare with a big tail.

It looks to me like Lily's wound is healing. If it was an absessed bruise, it may be pretty deep. It will take a long time to heal, just keep the bacteria controlled. But..... it IS very hard to tell with pictures.

Love Shapely's MTG - it has many uses - the sulfur is excellent for wound's and for any fungus condition from scratches to rain rot. Even use it on my own owie's. Have you tried splashing a bit on Lilly's wound? It is such a popular hair tonic for people that they have come out with a version that doesn't smell like hades.

I've never used MTG but know a few people that swear by it! I dont like the smell of any of those products so tend to avoid them. That wound look like it is healing well...it always looks worse before it gets better:)

Oou that wound!
Well..my horse is not fond of me for this but I use "Shriners"natural spray..it stings (used it on myself too)but it sure does heal things up quickly.
Good job on the cantering too...!
KK

I can't remember what it's called right now but Lily's wound looks like a grub that is normally laid under the skin of cattle. In cattle, the grub matures, hatches and leaves. In horses, it can't mature and leave and dies under the skin leaving an infected hole like your photo. They are common in California, not so much Texas. If it doesn't heal up soon, I would sure have a vet check it out. One of my horses in Austin had one in the same area and I eventually had to have surgery done to remove it. I'm sorry I haven't gotten back to you...my computer crashed and I'm way behind! Carmon

Warble! It's called a warble. I'm sure you can find some photos etc online to see if it matches. Good luck! Carmon

Thanks for the advice, one and all.

I'll look into that grub, Carmon, although in a way, I'm not sure I want to know...

Good for you cantering. I've never cantered, so you're doing better than me. Trotting even worries me because Baby Doll pins her ears back and then jumps into the trot with such force it feels like a jackhammer. gah!

Looks like you got some nice buys...that cozy chair and pretty pillow. Good luck with the flowers. I kill them by just touching them. I love looking at them, but they don't do well for me.

Have you tried tea tree oil or Manuka honey on the wound yet? Both are amazing healers.