First of all, we need to get this week DONE - between Mickey's accident, Sonny's injuries and Milkman's terrible news, I think it would be best for all concerned if we declared it Saturday and be done with it.

Everybody, lock the horses in the barn and wear your helmets and hang on to what you can, there is some tough mojo out.


Tonight I stopped over to visit Cibolo and Lily by myself. The heat here is still oppressive - it was 102 at 6:30 - that's when I made it to the barn. I knew I wouldn't do much with Cibolo, I just wanted to spend time with him. Yesterday I was there so late that all I did was ground work and a little walking before night fell. I mucked around with my new saddle, figuring out how to cinch it up and realizing that I'll probably need a different pad and a breast collar. But that's a different post (okay, I forgot to take pictures of it. It's an Aussie saddle.).

And when it's not. 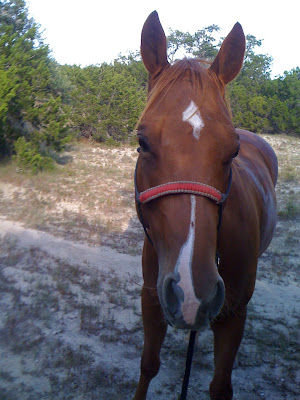 Instead I did a few ground manuevers to make sure he was listening, then climbed on.

With Canyon it was months and months before I'd ever get on him without a good 15 minutes of round penning. I think if I was going to canter on Cibolo I might have felt that I needed to do more. But it's 102. I had no desire to put either one of us through that. So instead I worked on how soft I could whoa and back up. 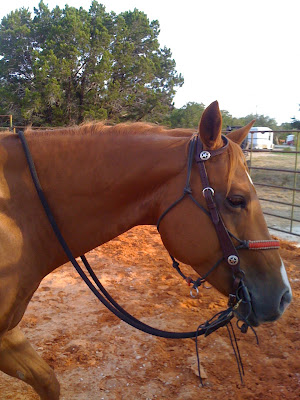 Cibolo is begining to respond to just a seat and breathing cue. We still have work to do, but it's going very well. So well I decided to try the one thing I could never do on Canyon (except for one or two occassions). 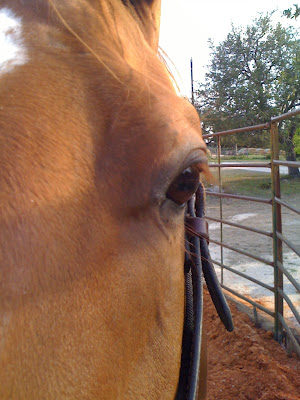 I'd worked on the ground with Cibolo about a week ago and after a few tries he was side passing. But because I never did get Canyon to do it well, I wasn't very confident that I even knew the cue.

So, I decided that we were doing so well, it was worth a shot. Stop forward momentum. Open up the side door. Cue at the girth. Slight weight shift.

I gave him a good amount of praise and jumped off. I was about to bust. He looked quite please with himself. I untacked and we went off for a grassy grazing reward.

I have a horse that can side pass - and, I know how to make a horse side pass!

But the most exciting part - I'm doing this very softly, all my asks are very soft and he's responding well, while still continuing to respect my space and my leadership. 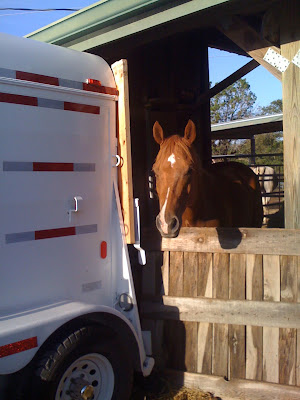 Oh yeah. AND he self loaded after only two little circles and the second time he BACKED OUT.

I swear, it's like I was channeling Monty Roberts or something.

Of course, even though it was planned that I'd be home late, when I came home the house was in chaos (grumpy kids and grumpy hubby - how fun!). It's never good when Mommy gets home after 7 pm. 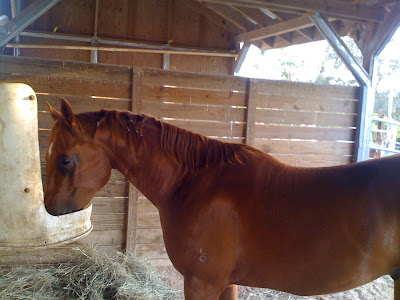 Typed in a hurry by Unknown
Email ThisBlogThis!Share to TwitterShare to FacebookShare to Pinterest
Labels: helmet., horse training, injury, side passing

How nice - amazing progress - he seems like such a nice horse - and so cute, too!

Well, aside from Heidi and Milk Man, it seems that things are flowing smoother for us and fo rMikey (Mikey might argue with me over that, as her bod creaks and groans...)

Anyways-- excellent work with the new handsome man!! He sure has a cute face- I can see why he drew you right in!

I'm just so happy for you to have that feeling of connection this early in your relationship. Pure heaven! Please keep telling us more. Carmon

Ahhhh, the sounds of success. Your post reminded me that if I get an equitation lesson tomorrow, I want to work on side passing. It seems all my instructor does is make me go in circles while he critiques my posture, but I'd like to learn new skills or be more efficient at cuing for old ones.