The proof is in the canter 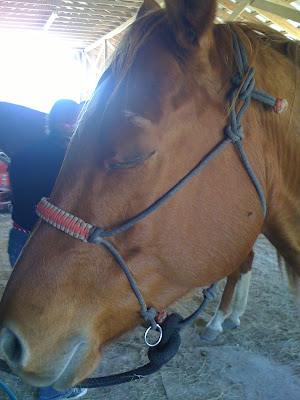 My relaxed horse.
My friend Rudy has a saying - things break down with horses in the canter. If there's a problem, that's where it's going to be.
It was true today. I took a long lunch hour (I start work at 7:30 and end at 7:00, so I figure I'm due) and went with Stephanie.

Stephanie works in our home office while she is preparing for Vet school and that girl LOVES horses. She's a really good rider and has excellent horse sense. She's been good for me because she reminds me that you simply don't give up. She's so in love with horses that she's ridden some pretty crazy stuff. And still loves it.
She is ALWAYS up for a ride. And she's darn fearless to boot.
So we got to the stables and I went out for my boy.
I guess I'm still pretty excited when I go out to get my horse and he stands there now. It used to be just a few weeks ago that he'd let another horse get between us, or he'd wander off. We'e een played "catch the gelding." But the last 3 times he is standing there, head low for his bridle.

It's either a good sign or he was half asleep.
His manners were impeccable as we came in. No hay snatching. No ignoring my requests to move. Everything we did was soft.
I started him out with some trotting and stopping, just to check the system. It was all good. He was Mr. Manners. Even Stephanie noticed.

Lily, on the other hand, was a bit of a pill. But Stephanie worked her through it. She was a bit put out to be... out, but the worst thing Lily does is turn back toward the barn. You keep her going in circles and she get's it and settles down to do her job. 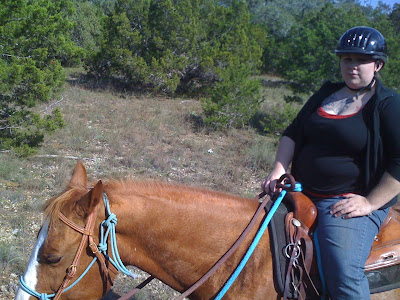 We didn't have much time, so we just worked the trails, went throu gh the trees, and headed back to the barn. After a few bird startles I was a bit suspicious. Like maybe he was going through the motions. Been there. Done that. I trotted him up and down, and felt like I had him mostly back in hand. 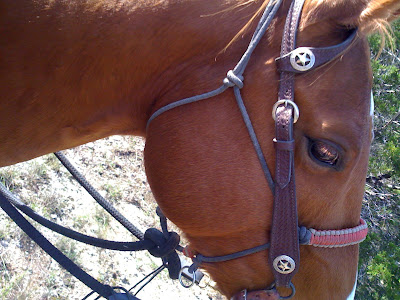 Then it came.
The idea

So, with great reluctance on the part of me AND my horse, but with Annie firmly in the saddle, we cantered down the road first.

Well, we tried. The reluctance on Cibolo's part actually was worse than mere reluctance. In fact he was head tossing and being a huge pill. We got about 5 "canters" before he dropped back into a trot. Twice.
Hmmm. Mr. Manners, aye?
Lily, on the other hand, kicked butt. She motored down the road like there was a barrel at the other end.
Well, clearly I needed to bring Mr. Manners around. Cibolo and I needed a come to Jesus meeting in the Arena.

We went for some cantering runs . It took a good 10 minutes, but we were finally free of reluctance, free of head tossing, and were cantering about consistently.
To be fair to Cibolo, I didn't canter him the last two times we rode, I was so focused on riding the trails alone.
This whole thing has made me discover something sort of lame about myself.
My chicken sh@# self is always around the corner saying "you know, you really don't have time. You can canter next time."
That's the scaredy cat girl. The one that can't even discuss Annie Oakley, let alone pick up a rifle and shoot cookies off yucca plants at 25 yards.
So. Time to send her off to do grocery shopping or cross stitch (I'm actually pretty good with cross stitch) and get on with it. From now on I've got to stop avoiding it.
Everything is fine.
We can canter.
And we need to. Every time.
Typed in a hurry by Unknown
Email ThisBlogThis!Share to TwitterShare to FacebookShare to Pinterest
Labels: avoidance, cantering, trail riding

Sounds good! Sometimes when the horse won't do what we're asking, that reluctance may just be a questioning of whether you really mean it, an ask, "you said to canter but you don't really want me to canter, do you?", particularly if you haven't done it a lot before. Sounds like you worked through it pretty well.

Give yourself credit for riding, even if you are hesitant to canter. There was a time when I would just sit in my patio chair making lame excuses for why I couldn't get a saddle onto a horse. Fortunately, I'm the opposite now. If I've got a spare hour on a nice day, I head straight for the barn.

Oh, if I had a dime for every time I've told myself, "next time we'll do that thing I'm really scraed of doing" on horseback I'd be paying other to muck my stalls!
Good for you!
I find it's important to push past my comfort zone to get to the really rewarding stuff. When I do I am usually filled with gratitude and more trust for myself and my horse.
~DD

Putting seat to saddle is always a good thing; what you do there, as long as it's kind and good training, is just gravy on the basic achievement of riding out. NM is right.

It's so great to hear you are enjoying going out to see your horse again! Good for you! Carmon