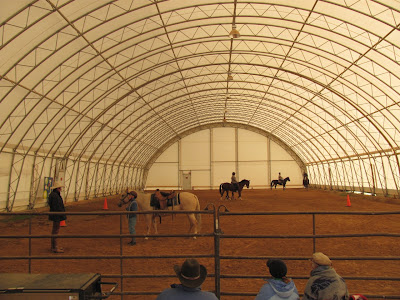 The next morning we arrived early to the arena - an hour and a half early. Donna and Trail Rider and C were going to spend the morning on a trail ride in Santa Fe via Bishop's Lodge and she had to leave early. This meant I had to unload everything I needed for the day in case they didn't get back in time for me to saddle up.

Needless to say, I was thrilled, particularly given that I had a dinner the night before. Have I mentioned that I'm not a morning person?

Anyway, I arrived early, unloaded my tack and hauled it over to the arena. It was plenty cold and both sessions would be held indoors.

I didn't bother picking up anything warm to drink because they had coffee and hot water for tea the day before. So I figured I'd just warm up there.

I helped by watering down the arena, then waited for the hot water to arrive.

It didn't. Turns out their coffee maker had broken and it took two more purchases before the hot water arrived. At 11.

Have I mentioned how fond I am of the cold? Especially when you get cold to your core?

I endeavored to focus and wipe away my childish (sleepy, freezing, crabby) irritation. The morning session was great. I was looking forward to seeing the progress K made with her quarter horse.

K had been doing well with her QH, a handsome sorrel gelding. They worked cattle, did some barrel racing, all kinds of things. But their work together unraveled after she entered him in a match race.

I know nothing about match races, but the horse that entered the arena the first day was a hot mess. I thought MY horse fought the bit. K's hands were full and busy trying to keep her gelding from touching the sky with his nose. (I have some photos of them, but they are MIA. Will post them soon.)

The first day Mark worked on quieting both horse and rider. K was sending so many signals to her horse (who was already out of sorts) that it was making things worse. Mark had her simplifiy. No leg cues. Only one cue - take up slack on the reins and keep the head in place. Slowly, slowly the gelding calmed down. Soon he was dropping his head. The nervous energy drained away and you could almost see their connection rebuilding right before your eyes. Her hands grew quiet. She was a good rider, you could tell, but they had gone down a road of arguing.

It reminded me of the misunderstandings we have at work - someone will have an odd interpretation of someone else's motive, then they react, thinking that person is trying to get around them. That ticks off the first person, whose motives were sincere, but now they are insulted. Pretty soon the entire thing is melting into a mess.

Until someone points out that they both want the same thing - to get along and get the job done.

On this day they began working on collection. The QH had an underdeveloped hindquarter and wasn't using his body well. That made everything he did more difficult. Slowly they worked on collection - first five paces, then seven, then nine. After each set of paces Mark would say "now" and she would give slack on the reins. Quickly the sorrel was catching on. Watching them work was beautiful, a glimpse of dressage. By the third day in saddle they galloped the barrel pattern, collected.

And this from the horse that was touching the sky with his nose.

The next time I came up I said I needed to work on steering. Smokey has the ability to run through his bit, his head turned in, and canter or trot in the opposite direction. Imagine turning your horse to the left, and, with his head still facing left, he actually moves to the right (or straight).

This problem stemmed from all that flexing. The flexing I've seen on countless horsemanship videos (I'm talking to you, Clinton Anderson). Basically Smokey had learned he could move with his neck flexed and now he had hyper flexion in that joint. Fixing it would be a challenge. What I needed to do was activate the next joint down the neck.

The key was to lift the rein on that side (the side where I was turning) so his head would tilt, activating that joint. Then he'd connect his head through his hip and make the turn.

Mark set me up in a sort of cloverleaf (which I never quite got, but that wasn't the real point) and we worked on turns. After half a dozen I started to get the feel of the lift. We did them at a trot - which is where I learned "the rule."

"Do you know the rule?" he asked me as I struggled with my not turning horse.

"Um, the golden rule? The local authority rule?" I said, attempting to be amusing before I ended up in a fence.

I laughed. I got it. I focused my intent and slowly we got it together. I lifted the rein a bit more, Smokey turned. We are turning. Cue (rein only - no leg). No turn? Then lift, his head tilts, we turn.

Slowly it came together at the trot.

"So," I asked when we stopped for a moment. "Can I really fix this in him? Can he rebuild this connection or is the hyperflexion permanent."

"You can rebuild it. But it'll take work."

We trotted off to the other end of the arena to get to work.
Typed in a hurry by Unknown
Email ThisBlogThis!Share to TwitterShare to FacebookShare to Pinterest

It was great to watch Kaitlyn (sp?) work with her horse and watch them reconnect with Mark's gentle guidance.

We also went through the Clinton Anderson flexing phase, but we didn't over do it with our horses so we don't have the problem with a disconnection. Just lucky on our part.

You did great work.

Well of course you can fix it. Smokey's a young guy, you're smart, you have great help, and lots of time to work on fixing it. You're doing great! Smokey's doing terrific, too! He really tries hard for you. He's such a sweet boy.

I appreciated your analogy about work and how mixed messages and misunderstandings can happen. That's even happened to me in the blogger world. Something so tiny can upset someone so easily, and everything gets thrown out of proportion so quickly. It's rather sad, really.

Anyway, I'm so very proud of you, Winter. You and Smokey worked together so well during the clinic, and I'm glad I was there to see it. :)

I finally was able to open your blog and read about the clinic. Sounds like this is a very good clinician, no nonsense, and a very perceptive horseman. Lucky you, and lucky Smokey to have his help!

I'll totally agree with you about the Clinton Anderson method of 'flexing'. It's simply just too much. Would it surprise anyone to know that 20 years ago, we were taught the same thing Clinton is teaching now? I did it to one horse and struggled to get her over it for years. I wasn't as lucky to have someone point it out to me early on.

And my eyes are bugging out about not getting any coffee until 11am. I don't think I could have survived that. ;-)

That's pretty cool about the other horse. For once it wasn't the barrel racing that caused a hot horse. Whew!

Good stuff - breaking things down and simplifying things often makes things get better pretty quickly. The flexion thing can be a hard one but you're already making good progress on it. Any learned behavior can be replaced by a new learned behavior, and your boy seems like he really wants to please.

Even though I didn't get to be there to support you, I'm so glad you and Smokey got to have this experience! People can try to tell you why flexing is bad, but Mark can show you in a way that makes it so clear you never lose track of the knowledge again. Yay you and Smokey! Carmon

I am thrilled you are getting to work with this guy--and your guy (Smokey:-). Sorry to hear how cold it is--it's windy and miserable here in Austin, too. Brrr. Thanks for keeping us posted and congratulations on the progress!

I love hearing about good sessions with good clinicians!

I was struggling with Scout a couple years ago and decided to try the flexing thing one day. Instantly taught him that he didn't have to go where his nose was pointed! He loved that he could just stand there and crane his neck around. Yikes! Will never make the mistake of that again!
He's fine now, you'll get thru it too.

How totally cool. Despite the fact that it was cold, you were probably really tired and the lack of a hot, caffeinated beverage, it sounds awesome!

This sounds like a great clinic. I'm glad you're working on fixing the flexion, I hate it when trainers teach this. It has absolutely no value, it's good you recognized it early on. I've read all of his books but have yet to see him work in person, really seems like a good horseman and knows what he's doing for the good of the horse and rider.You and Smokey did a great job connecting, he's a sweet horse.

HI!
All your writings are so good. Your making some of the wisest choices with your guy.
The clinic sounds sooo good. he is a true horse lover and actually understands each one of them.

Yea, I am around those who are stuck on the "one rein yield"as they call it...it supposedly gets the horses attention, a punishment. I tried it with mine and she fell over! IT IS USELESS!

Wall leg and Wall rein is what is working for my mare and I. Just knowing where the wall is, my mare yeilds and bends accordingly if I am constant with my outside aides(wall).She has stopped running though and jutting out- shoulders and haunches.
Need to catch up..you probably learned this the next day!

Thanks so much for the inspiritaion!!
KK

I borrowed the CA gaited horse DVDs from a friend, and I really thought the flexing / one rein stop thing was totally overused. I think the horse gets bored with all the flexing and learns to "spaghetti neck" around.

I taught Dixie the one rein stop as a STOP. It's definitely better than bolting - but that's all I use it for, "woah-dammit-NOW."