My Three Legged Horse in the Trailer 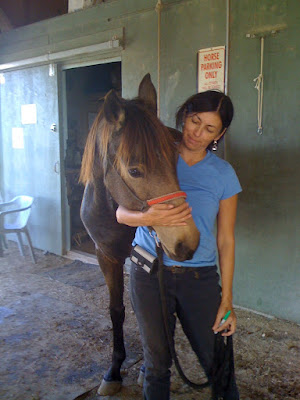 My horse. Mine.
Sunday was a big day around here. As of Sunday I own Smokey - final payment made on Cibolo and that went straight to pay off Smokey!

I cajoled Stephanie to a trail ride - but it was pretty gusty so we called Sharon to see if we could ride at her place.

But first we had to get them in the trailer. Smokey was reluctant to load. Really reluctant. Basically if someone stands behind him he'll load right up. So I've got some homework to do this Thanksgiving.

Cibolo had never loaded in the back section of the trailer before, so it took a few tries and a few taps on the rear.

When we got to Sharon's, Smokey started calling to the other horses. Stephanie headed to the arena and we took over the round pen.

Right about then I was pretty glad we were going to do arena work, because my horse was spazzing out. It got worse and worse. I realized I was too soft - unusual with Smokey, usually getting too big is a disaster.

I finally had to bring the rope into the round pen because I couldn't keep his attention. Remembering the run it out rule from the clinic and book, so I sent him around in canters, turning him when he called out. Slowly he hooked up.

Interestingly every time I asked him to stop, even when he was riled up, he stopped. If I called him to me, he'd come right up to me. Not sure what to make of that.

Anyway we began our work session in the arena. Cibolo did really well, and Smokey came around. Soon we were cantering well on the left lead, but he resisted the right. More home work. But I got what I wanted from him in our session - head down, responsive, better steering.

We loaded up for the trip back to the barn, Smokey wouldn't load, then loaded fine with pressure from behind, Cibolo hopped right in.

Then something happened. I don't know when. It's a 30 minute drive to the barn. I took my time, taking turns slowly and going extra slow on the road. I think I just didn't want the day to end.

We parked and got out to undo the horses' trailer ties. I stroked Smokey and reached down, and saw it. Smokey's front left was hung up in his hay bag. He was standing on three legs. I struggled to unhook the hay bag, his pressure was making it difficult to lift it free of the clip. I cursed that I didn't have a knife on me. After getting him to lean forward slightly I was able to free him. 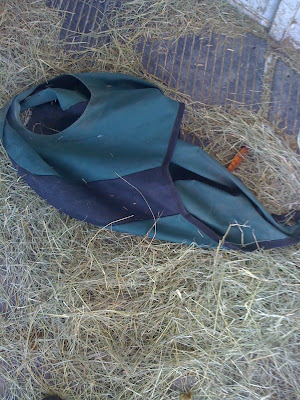 He didn't limp out, never panicked, he just looked for help, standing still. I don't know how long his leg was caught. I don't know if he stood on three legs for the entire drive, or if he just pawed at a stop sign.

All I know is I'd just paid him off and now he almost broke his leg on a hay bag. 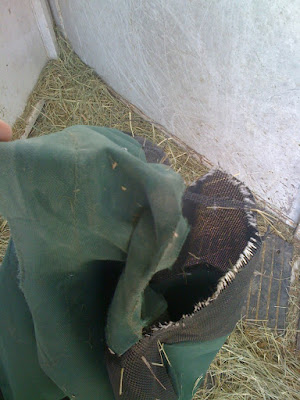 Somebody needs a new hay bag.
One that hangs much, much higher.
For my next trick I washed him off and watched as he rolled in manure. So now he's green, muddy, suspicious of hay bags and...

mine.
Typed in a hurry by Unknown
Email ThisBlogThis!Share to TwitterShare to FacebookShare to Pinterest
Labels: arena, horse trailering

Wow, that is totally scary. Give you a heart attack when you opened up the doors? I'm betting...
Glad it all turned out ok, and that's a good horse to not freak out!

Yikes..poor Smokey!! I hope he doesn't present you with any more possible vet bills now that he's "yours!" ;)
He sounds like a good boy to stand still and let you help him.
CONGRATS on the MINE pony!!

Isn't that a good feeling that he is now all yours? And judging by the first photo, he's pretty sure you are all his!
For a short drive like that, do you really need to have a hay bag in the trailer? I prefer not to feed in a trailer. If I'm on a long drive, I'll stop to let them eat, or I will have them loose in the trailer(mine is a stock trailer with no dividers) and I put the hay on the floor for them.
Smokey is a really good boy to not panic and thrash around when you were trying to help him.
And don't forget the horseman's rule: Always pack a knife!

I love that picture. I like to imagine that you were about to write "MINE!" on his forehead in green sharpie. Heeheh!

I'm so sorry about the hay bag in the trailer! Ugh, I know just how scary that is. Deep breathing...

I know what you mean about paying off a horse, too. For a solid week after I paid off Dixie, I was sure she'd just fall over dead on me. My husband was like "What, is there something wrong with her?" and I was like "No, it's just that she's finally paid for!"

I wonder why horses get caught in hay bags in trailers. I've heard of it happening so many times, and I know you didn't hang the thing way too low, so I wonder what actually happens. This would be a good time to have a trailer-cam!

I always hang my hay bags in the trailer just above chest height, because I don't want the horse to inhale too much dust or choke. And we all know that trailers with mangers are bad cuz a horse can't put its head down. I wonder what the ideal height of a hay bag is. Or construction. It appears that Smokey got caught and it ripped to alleviate some pressure, but not altogether, so he waited patiently for help.

Oh my... scary. Glad Smokey was OK and congrats on him being all yours!!!

I *always* feed in the trailer, even for short jaunts. My horse is an excellent traveller--part of being a good traveller is munching on hay the whole way (um, the horse should be eating the hay. the driver, not so much). She has been known to gain weight on long trips.

I had a similar "haybag" incident many years ago with the Toad, who was not (initially) a good traveller. He was dorking around in the trailer, pawing and hollering (his buddy was RIGHT NEXT TO HIM) and got his leg caught in the haybag. I freed him almost immediately without incident. At our next stop (2 hours down the road), I discovered that he was stuck in the hay bag again...uninjured, but very pensive. He never pawed in the trailer again. The haybag was a complete wreck.

That's exactly what happened to Maisie on her trip down to Tennessee! She actually managed to get her front foot in the top of the bag, which was hung really high - not sure how she managed that! She was OK too, although she wasn't as relaxed as your boy - she was struggling and fighting which made it even harder to get the bag unclipped.

I recommend a small-mesh hay bag - no chance of entanglement with that.

Glad he's OK and that he's now officially all yours!

Paid-In-Full! I bet there is a horse named that somewhere or at sometime. Glad you have full ownership now. And I'm very glad Smokey kept his head when he caught his foot in the hay bag.

Love that photo of the two of you! Looks like Smokey's happy he completely belongs to you now.

Y'all, my mare can easily paw above chest height. That's how she got stuck in the Yellow Trailer of Doom. I think a flimsy haybag tied very high is the only safe way to feed on the road. (And I agree with Aarene - I want my horse to munch the whole time!)

Congrats on the official horse ownership. I have hay bags just like that, and though I've used them to entice the horses into the trailer during training, I've never left them in there while driving because of the horror stories I've heard about horses getting a hoof caught. The hay nets can be worse than the bags. Plus if I can see the horses' nose peeking out between the bars (and not buried in a hay bag) while I'm driving, I know it is still standing upright. I've seen my horses get their legs caught on so many things that I'm just plain paranoid. Yesterday Gabbrielle reared up and got her leg caught over the railing. I yelled, "That's a no-no! I don't want any more lame horses!"

She pulled her leg off the railing and came down on all fours, then lowered her head and settled down. Another time she got her leg caught in a twisted chain I was using to block the horses from trying to squeeze into a tight spot. I twisted the chain together so that they couldn't get their legs caught between the chains, but it still happened.

Anyway, I'm glad Smokey kept his cool and let you rescue him.

OOHH!! Wonderful, what a great day... BOTH horses pd off!(and no injuries)
Fabulious picture of you and Smokey too!

MAN!
That leg-in-the-haybag stunt is sooo scarey! I have had it happen to me twice, as I transported other's horses.
Nothing happend to either of them, and getting the legs out, was difficult- and dangerious.

The first time- I just could NOT get this mare I was transporting, leg out of the haybag. As you know...the wieght of them does not allow you to unclip the darned thing!
I had to get into the trailer, with her,lift up the bag to finally release her and it! She was a Jewel for me to do that!

I have a solution now too=
If a horse paws..maybe try not allowing them hay OR get a "quick Release" sm bungie rope. It has the rather large clip on one end and the quick release on the other.
Loop it around the tie ring in the trailer. Make sure to connect the release side, so it is downward- if you put your hand in through the window, from outside and pulled it, it would come apart.
The hay bag will hang from the "quick Release" looped rope now.

I just leave them in the trailer now (and the blockers with ropes).

For a pawing horse, I also carry "Paw chains". I hate the noise and damage it does.

My theory is they're all just going through life lookin for a place to die. Glad he is OK and congrats that he's yours!

Great news. He's a good horse and will only get better with time.

What a scary event, and how very good of Smokey to not panic! I love the picture of both of you!
The day Buckshot became mine, he got kicked by another horse, and couldn't be ridden. So I stood in his stall, grooming him slowly, telling him how sorry I was that he got hurt, and thinking, I guess this is what happens as soon as you get a horse- they get hurt! Murphy's law, no doubt!