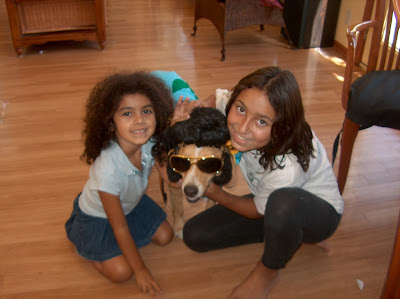 Here's one from my Crib Notes...

As usual, I blame TV. It’s a convenient target for blame, doesn’t fight back, and everyone else blames it, so I’m in good company.

Because recently our house had been overtaken by the phenomenon of “instant replays.” Honestly, I never have to worry about missing anything in my kids’ lives because they are more than willing to re-enact any minute of their day. Sometimes every moment of the day.

Now, I’ve never been one of those people to watch a movie a dozen times, or re-read a mystery. But these days it’s as if our lives are on TIVO and subject to rewinding at any moment.

Unfortunately there are significant glitches in the rewind and re-enactments around here. Apparently retelling your moments from the day, especially the funny ones, are nearly impossible to do without a complete breakdown in communication.

For example, Sierra and Mireya re-enacted their entire math related drama for me.

Sierra said, “I was asking Mireya…”

At this point she broke down laughing and it took a few minutes to get focused back on the story.

I tried to help. “You were saying that you were asking…” This is always a mistake. That rewinds the whole thing back to the start of the story, which can only be revisited so many times until you beg for release.

“Yes, I was… I was… asking Mireya,” Sierra said, nearly breaking into laughter again. My smile strained at the edges. Sensing she was losing her audience, she sped up. “I asked her, you know, if she had ever dealt with negative numbers…”

“And I said what does dealt mean?!” said Mireya jumping up from her place at the table, no longer able to contain her role as supporting actress. “Because I thought it had to do with farting because they say ‘whoever smelt it, dealt it!’

It took a minute, then we cracked up.

Then they attempted to replay the scene for Dad, barely making it through halfway before breaking down again into laughter. About five minutes later they got through the retelling and by then, it was somewhat anticlimactic. Unphased, they replayed it for each other and giggled about it for a good half hour.

And I’m still not sure Mireya knows what a negative number is or what the word dealt means.

That's funny. I can remember our boys (now 41 and 39) doing the same thing when they were that age.

You told the story very well. It took me a minute to get that "dealt" was the keyword. I was thinking, "What does farting have to do with negative numbers?" I'm creative, but not that creative. Ha ha.