Outside My Comfort Zone Part 2 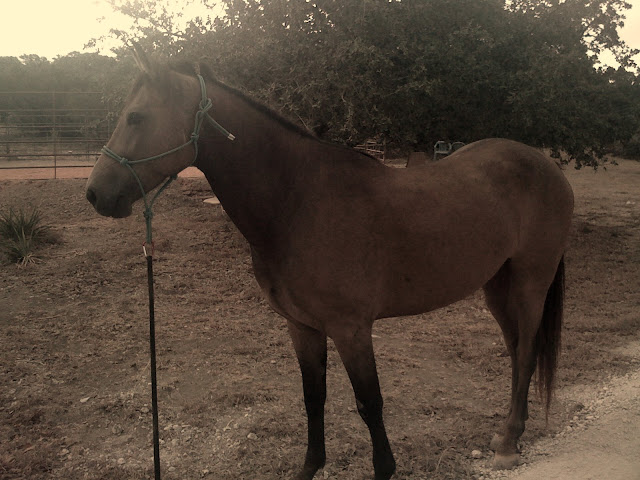 Smokey was also in a quiet space, but I found him sticky at the canter in the round pen. Really sticky. As in "I'm not going to canter, so there."

We descended into a brief argument until I realized it was headed in the wrong direction. Raising my "voice" to Smokey doesn't work. For example, I tried snapping my rein ends on him to push him into the canter. You would have thought I attempted to brand him. He became frazzled and pissy, in a sense matching my irritation, I suppose.

I haven't quite found the right line to push my point with him. There's a firmness that has to settle in place, and then he'll listen. But I can't quite hit it consistently.

We were arguing and I said "No battles today, Smokey. Let's just get this done." I brought my energy down, shifted my mind. We settled back down to a walk trot transition until it was smooth again, then I cued for the canter. And he cantered.

So why couldn't we do that from the start? I have no clue, that's what I mean by missing it somehow. Maybe he needed time, but seriously, at this point, he needs to be less... diva.

We hit the local trails, and I was inspired to do a little of the things I saw on "America's Favorite Trail Horse." I found a few obstacles including a new log. At first Smokey shied at it a bit, but after some repetition we were going over it at the trot with no hesitation. It wasn't a jump, but as close as I'm ready to attempt (given I don't know anything about jumping other that what I see on TV).

Then I took him down the route I took Lily earlier. Smokey wasn't as hesitant - he's a little better about going out on his own. THE HOUSE was still a hurdle, but not nearly as bad as with Lily. He was a little high headed, but we got through it pretty well. We even had two cars pass us and ran into Stephanie coming back from her crazy graveyard shift at the emergency vet clinic.

We were on our way back when something by THE HOUSE caught his eye. I could feel his energy rise. I gathered the reins and started to have him dosome work when whatever caught his eye really moved - and so did he. He spun and headed back the way we came. But this time, this time I was ready. I had already gathered the reins. I steered him back around, stopping him under two trees.

I had controlled the bolt and stopped him! I urged him over to the spot he had turned, but he was blowing. I dismounted and walked him through the area over and over, he followed me readily on a loose rein. On the fifth time I lead him back to the place where it all started and got back on.

And I rode him past THE HOUSE. Calmly, with a smile.

We had a good walk back to the barn, meeting up with Stephanie who had gone over to say hi to Cibolo. She brought an apple, but Smokey doesn't like them for some reason. (He will *sometimes* eat a carrot. But cattle calling cubes are his real addiction.)

This time I felt like I didn't let Smokey down. I rode through the situation, was ready, responded appropriately, didn't let fear own me. Had he bolted to the barn I'm not sure I could have stopped him, but really who knows... Maybe I would have. Afterall he could have kept going, period. In the end I think this experience gave us both something we really needed.

Faith in one another.
Typed in a hurry by Unknown
Email ThisBlogThis!Share to TwitterShare to FacebookShare to Pinterest
Labels: bolting

Stopping a bolt is a real achievement! Sounds like both of you really needed the confidence booster. Congratulations!

i'm enjoying reading about your journey with your horses so much!

You found the answer, calmness and consistency. So very well done.

I know exactly what you mean when you talk about the line of firmness - it's something I struggle with - not so much with Dawn, who's super responsive - toning things down with her is a challenge for me - or Drift, who can be fussy and balky but just gives in and doesn't hold a grudge. Pie's harder - he's a bit resistant/stubborn and also doesn't like being pushed - so getting the job done without doing too much and pissing him off is a challenge.

Sounds like you two are getting to have the connection you need to interact with each other during the good and bad times. Good for you for riding through the antics and helping him realize you wouldn't let anything "get" him.

We had a horse once who would only eat a certain type of apple. I'm surprised he doesn't like them at all.

Well done indeed. He's come a long way in the past few months.

Well done. Our horses don't care for apples either. They love carrots.

That is so awesome!!! Way to go girl!