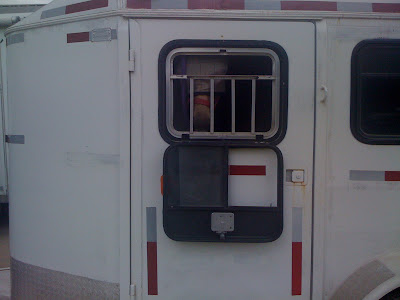 Things did not go well.

In fact, it was pretty much a disaster. Fortunately, for once, I kept my perspective. Not completely, but darn near.

But let's start at the beginning. On Friday the trainer/BO suggest I join her at the lake for a morning ride. I declined. I knew she was taking her endurance riding client out there and they had been working on conditioning the new Qua-Arab in the barn.

I've been really enjoying my horse time, but sticking to my comfort zone around the barn. Both horses are doing well, we are all having a good time, drama is low.

So riding with two experience endurance riders who will be on horses who have been in training for weeks sounds like a bad idea to me. I'd be on the greenest horse, who I hadn't ridden in a week – and last week with all the changes in our lives with DH, I'd only ridden once. No thanks.

“Just join us for a swim, then. You can come out and meet us afterwards and swim with Smokey.”

Hmm. That sounded doable. We'd haul over to the lake which would be good, meet them, maybe hand walk around, then swim, then go home. Minimal. So I agreed.

That night I packed my lunch with my nerves barely contained, attempting to decide between an orange and trail mix, as if picking the wrong item would throw off my rhythm.

I ended up taking both.

I was out at the barn a little later than usual on Saturday to feed since DH was home and we were hanging out a bit. Rain had finally fallen in San Antonio and we were hopefully that a few drops would head our way. Clouds surrounded us, a welcome gray shade, the smell of damp earth in the air. I wondered if the weather would impact the horses' moods.

I pulled into the barn and set to work to quickly grained the horses I knew they'd be taking – Jake, the Qua-Arab bought from the auction, Tuffy, the BO's latest horse and just about the sweetest, calmest arab I've ever met, and Rocky, the other bay arab (also a sweet horse, but with many soundness issues). I was just starting on graining my horses when BO and the Client, B, arrived. We talked through the plan – I'd call about 11 then head out to meet them. By then I'd have Smokey warmed up, maybe we'd ride in the parking area, then swim and have lunch.

Then I saw a bad scrape on Smokey's knee. 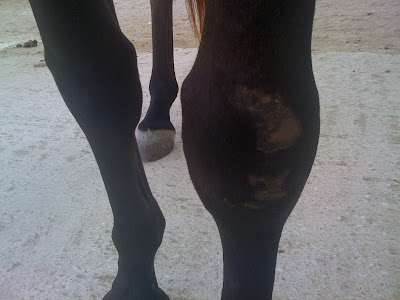 BO checked it, and agreed it was fairly minor, something he must have picked up when they were running loose in the pasture area. I would treat it with a water therapy and decided if he showed any signs of lameness at all we'd call it off.

They loaded up after a while and I focused on feeding the remaining horses. I hooked up my truck to the trailer, triple checking everything since it had been so long since I'd hauled anywhere. Then I got Smokey saddled up and Lily haltered. 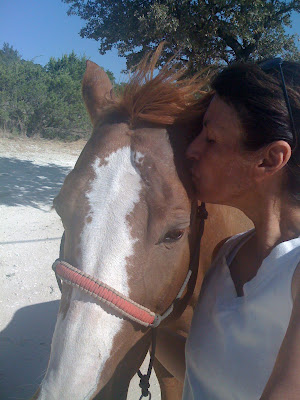 Then I rode Smokey in the round pen. Not a bit of lameness in the leg. In fact I was surprised to find him quiet and responsive given how little we'd ridden lately. It was as if we weren't missing a lick. It looked like this was going to be a great day to take a step forward. 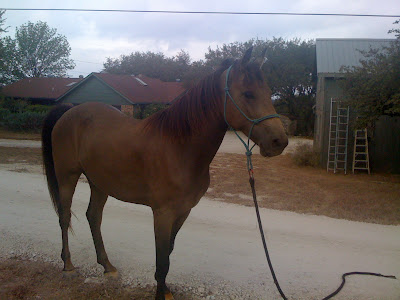 He's already getting his grulla coat on.

I took Lily back to have hay with the others and rode Smokey out on the trails. He was perfect. Quiet. Listening. We curved around bushes and trees, up gentle slopes, everything went so well. The swim would be a reward, I decided. A nice topper to a good day.

I called the BO a little later than the time we'd set up. She said they were running late, but to head on out. Smokey loaded easily and we headed out to the lake.

When we pulled into the parking lot I was a little concerned with the number of trailers in place. I thought the BO said no one was there, but maybe they arrived after they had hit the trails. I unloaded Smokey and he was pretty good. A bit up, but not bad at all.

Unfortunately it was a condition that wouldn't last.

Typed in a hurry by Unknown
Email ThisBlogThis!Share to TwitterShare to FacebookShare to Pinterest
Labels: horse drama

Everything started off so well. Don't leave us hanging!

Waiting on the edge of my seat...

Dangit, this is worse than one of the old-timey radio show cliffhangers!

Uh oh...you are making my tummy feel a little nervous. I hope everyone is fine. Hope Smokey's knee is on the mend.

When your gut says no, don't do it. Everytime I've been in a blowup or hurt, my gut said no, and I went anyway. Hope things didn't go too badly.

Oh darn, I don't like the sound of that.

Well, you're well enough to be typing, so I guess that's a good thing!! Oy. THIS is why I'm in no hurry to buy a trailer and adventure outside our safe little barn with it's safe trails:)

Smokey is gorgeous, just in case I haven't mentioned that before lol.