I call it horse dreams because I can only dream of riding these days. After being sick for two weeks I'm so behind on the holidays that a veil of terror has descended. I've focused this weekend on getting caught up as much as possible. Horse time is curtailed severely.

I did visit Canyon on Friday and noted how his bite is healing. 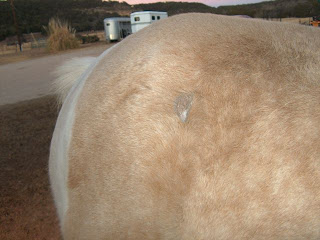 Now look at this face. Who could bite a horse with that face? 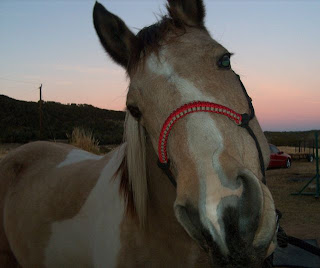 There's a gelding at the stables that has become crabby. His owner, a young girl with learning challenges, has been gone for what seems like months. She comes over once in a blue moon, and as a result her horse, Beautiful, has become more difficult. He's learned to buck and be stubborn in the arena. So his owner is now even less motivated to ride. It's become a vicious cycle.

I've noticed that horses who are turned out at the stables and ridden very little seem to develop a terrible attitude in the pasture over a few months. It's almost as if they revert, or get bored and angry. Doesn't happen with every one, but it happens a lot.

I saw this happen with a mare out there. She was a tough mare and was very unfriendly when I met her. But when she lived elsewhere she was fine, reportedly. Dominant, but not obnoxious. The difference?

At her previous home she was ridden nearly every day. At her new home she got very little attention. She turned into a kicker and was becoming a danger to other horses. It was like she hated everybody - including other members of the herd.

Then someone came out and leased her for a while. She went from being a monster to being much, much better. Here was a horse that would bite at anybody that got in range suddenly became a horse that you could pet and safely walk around. Her head would lower, her eyes were soft. She was still dominant, but not dangerous.

It was as if she needed a dominant owner so she could relax and not be in charge. I've seen this in dogs, but never thought it applied to horses.

Unfortunately the woman who was leasing her had to leave and the beautiful mare with reining training went back to her old ways. In a few months she went to the auction. She went for a decent amount, so she probably has a good safe home.

At least I hope so.

Canyon has his wooly coat on. He's never been blanketed, and he certainly looks warm. 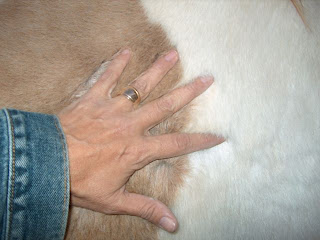 I miss him. Maybe I'll sneak over there for a ride tomorrow...

There's something about horse whiskers. Lately it's my favorite thing. 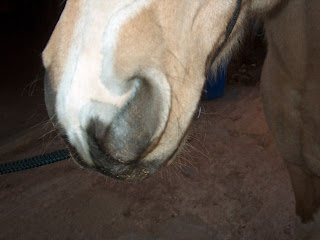 I'm weird, I know.
Typed in a hurry by Unknown
Email ThisBlogThis!Share to TwitterShare to FacebookShare to Pinterest
Labels: biting, herd, herd behavior

I recommend you the website www.saddleonline.com and it has lot of amazing products.

HI!
I'm so glad to have found your website! And what a sweet face. The other end certainly didn't deserve that bite!
Reading & Riding rock,
Terri Farley
phanstomstallion.com

Whiskers and winter coats remind me of prehistoric cave paintings!

I guess his winning smile just isn't working in the pasture! LOL

Cara, I'm glad I'm not the only non clipper. I like the wild and wooly look. :) Mini mammoths? lol

I love the little tiny, whisker-like hairs that they have on the bottom of their noses. You know, the little rough ones???

I actually prefer clipped whiskers, but that comes from all of my years of showing. Now I see a whisker, and I am like "...quick...clip it!!!" LOL!!!

I agree with you about different horses' and their personalities meshing well with some people, and not so well with others. And yes...if they are kept stalled or in small paddocks with no exercise/stimulation, they can get a bit on the nasty side at times. Not all horse, but some definitely do. :)

I had a sinus infection that lasted an entire month. As a result I haven't been riding in a long time. Now the weather is lousy so who knows when I'll get to ride again, although I am heading to the ranch in a few minutes here.

Hope you have some good horse connection time, David. Even just a walk or hanging out in the pasture would be great. Just tough to get out when it's miserable out there...

Horse Whiskers and whiskery muzzles are the best!

Your handsome boy reminds of a yummy S'More. He's got the graham cracker, marshmallow and chocolate coloring and is cute enough to want to nibble! :)

I'm worried that my mare will become grouchy, lazy and spoiled now that I can't ride for several months. I need to at least get strong enough that I can do ground work with her, so she doesn't forget who I am...The Boss Mare.