Patience, discipline and a side pass 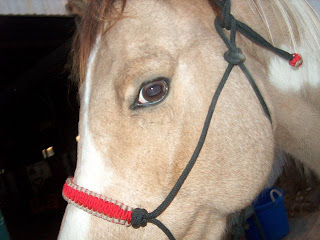 (Canyon, giving me his "are you nuts?" look)

Over the weekend the temperature hads dropped and the clouds dropped their long skirts to the ground, a thin flowing fog blurring the world as far as you could see - which wasn't very far.

I went out to the stables early in the morning on Sunday to meet some folks to ride, and, as so often happens, was on my own. It was in the low 30s and windy, so I suspected they would bail. But I had a kitchen pass from my Cling-ons and wasn't about to miss an hour of my very own.

I saddled up Canyon and could tell immediately that he was crabby. That's unusual, he is not particularly crabby in general. He shifted his feet when I was checking them, dancing away twice. I moved him around a few times and he settled.

I decided to start out riding in the round pen since we've had so little time together. A few minutes into it, it was clear his attitude was lousy. Head tossing. Breaking into a canter. Trotting in the bumpiest way ever. Really out of character, even with time off. Then, about ten minutes later I found out why.

The owners of the stables had been out late at a company party and understandably hadn't feed yet. They are real morning folks and usually feed when it's just getting to be daylight. Since it was about 9, Canyon thought I was there to feed him, and I thought he was already fed.

Unfortunately they came out to feed as I was having my tough time with him. I realized then that this was why he was being such a pill. But I also knew I couldn't give in to his attitude, although I was sympathetic, especially since he could see EVERYONE ELSE WAS GOING TO EAT. I'd be irritated too.

So I went back to basics to get him to pay attention. I jumped off and did a ground work session as they went around and fed. Then we did some saddle work. Then we rode away past the eating horses, through gate of the property into a small open area, beyond a barrier he's usually uncomfortable with and that usually requires a spin or two to get past. (I rarely ride him out alone, but have made that my new goal - a little further every day. We're making slow progress and he actually did very well)

Anyway, I felt like I had to make a point, that whether it was feeding time, windy, cold or just one of those days, I was still in charge.

So we went over to a fence line and, after working on a few figure eights around some trees, I tried getting him to side pass.

And he did it.

Okay, it was ugly and he'd only do it on one side but it was a SIDE PASS!

So back to the barn we went, going through our gaits the whole way, and he was an angel. When we got back I quickly untacked and sent him off to breakfast.

Later Sharon remarked how well he's doing. "I couldn't believe you were out here with him on such a windy day!" she said, well aware of my panic boy's antics.

I felt like I pushed past something Sunday, that by making him do my bidding (as minor as it was) when he REALLY DIDN'T WANT TO, that I created (by accident) a big learning moment.

If nothing else, I got my first side pass. I'll take it.
Typed in a hurry by Unknown
Email ThisBlogThis!Share to TwitterShare to FacebookShare to Pinterest
Labels: horse training

That's a great achievement. I thought that the side pass was going to be something of his choosing. Koda does it all the time when she doesn't want to go somewhere. :)

No kidding. Now I just have to get him to go along when I ask for it again. LOL

Good for you!!! I was chuckling to myself as I read this, because I have had a similar experience on a horse before. They are quite disgruntled, and rightly so, when they miss a meal!

I suspect he'd have done macrame if he thought he'd get back in the stall faster.

You know today he side passed at a trot as we went by the wash rack where we usually untack. Course I didn't ask for it then. LOL

Way to go! And my what a toughie you are. If I'd have been the horse, and had missed my breakfast, I think I may have bit you in the butt! lol!

But what excellent results, and even some goals of riding out alone too. Yay!

And I love what you wrote: "and the clouds dropped their long skirts to the ground, a thin flowing fog blurring the world as far as you could see"