It's been dry as a dusty bunny's martini around here.

We live at Canyon Lake in the Texas Hill Country and here you can see the bones of this drought. There's an unsightly ring around the lake (where is that cleaning lady?). 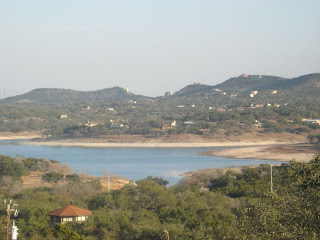 The public docks are so low that it's incredible to think we ever launched from so far away. 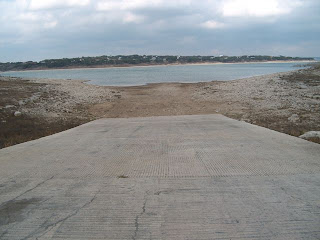 Since we moved here 11 years ago I've seen a different extreme. We've been here for the 2002 flood that sent water over the spillway for the first time, creating a gorge by removing 80 tons of limestone in three days.

We've launched from the parking lot of the boat ramp, worried that we'd hit the pipe rail with our propeller.

You can see the rail in this picture... No one's going to hit it with anything other than a truck bumper right now. 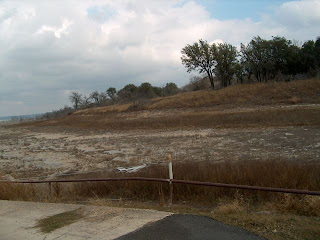 We've mucked around in summer of mud, wondering if we moved to Seattle by accident since it wouldn't stop raining. We were constantly fighting thrush and I learned just how foul a horse's hoof can smell.


And now, it has stopped. Utterly. Here's the index that tells you how bad it is.

That's us in the dark red, like the eye of an angry, thirsty bull.


Here's what our average rainfall should be (look between Austin and San Antonio. See me waving?)

That's what it should look like. Really green. In 2007 we had a foot of rain in July alone.

Here's Mireya walking in an area that should be filled with water. And there's the aforementioned rail. 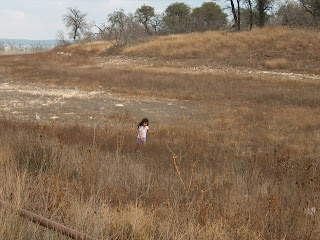 Our deer here don't show signs of stress, but I wonder about wildlife that don't happen to live near a large water source. When we see such severe swings in weather I wonder if this is why this area was only somewhat settled by native populations, if the severe weather swings were discouraging.

I'm from the desert and while I miss the rain (as the song goes), I don't mind the dry conditions personally. I am used to yellowed grasses, and parched, cracked earth. I have a healthy dislike for living in mud.

But all along our area are places who have seen their wells go dry and they are having to truck in water for their horses. There's no relief in sight.

And we'll pay the price in March and April in another way too. I'm already mourning the spring flowers that will be absent from the sides of the roads. They are fed by winter rains, and this year they'll have to sleep for another year, waiting for the soaking rains to bring them out, when they will hopefully, be a riot of water fed color.


Let 2009 see some return to rain...
Typed in a hurry by Unknown
Email ThisBlogThis!Share to TwitterShare to FacebookShare to Pinterest
Labels: rain

we are flooding today in the ever green Pacific North Wet!! Do ya want me to send you some??

Whew. That's a serious drought.
As desert dwellers, we're used to dry...and like it, too. Like you, I dislike mud. Wwith all of our recent snow melting, the ground is like swamp land. We can't even drive up the hill to the barn now. Yuk!
I sure hope your area gets a good load of rain this winter and Spring.

Please send some - wait, how much rain do you have? You know the old Chinese curse - may you get what you wish for....

Lisa, how much snow did you get?

We need something, so think wet Texas (oh boy, is that going to hit the censors hard...)

NOT TO MENTION THE HAY PRICES IF WE DON'T GET A 1ST CUTTING!!! Yowzah!