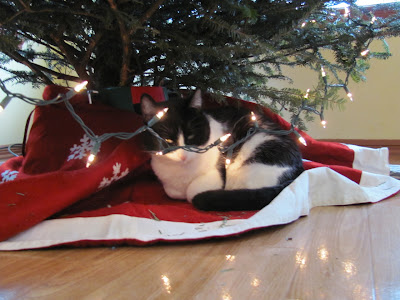 We lost a member of our family this week. Lucy Little Star, aka Kitty cat meows away, aka Kitten, got terribly ill. During my three days off she didn't come in for her nightly sleep inside (she was an indoor, outdoor cat). It worried me, but it's happened before, sometimes she just goes into the garage.

She came home late on Saturday, and didn't want to come inside. I fed her outside and kept an eye on her. By Sunday evening I was really worried. Her food was only halfway gone and she didn't seem to be drinking water.

We took her to the vet in the morning and they gave her antibiotics, injected water under her skin, kept her all day to observe her. She ate a bit and seemed to perk up. We took her home and hoped for the best.

Apparently the best was on the other side. The next morning her breathing was terrible. We tried to feed her and give her water. After getting back from school registration (which was way more complex than I ever imagined was possible), I knew we had lost. She was lying in her own mess.

I wrapped her up and took her to the vet, who was nearly as torn up as I was. Lucy was only 7 years old.

It could have been anything, but I think she ingested something poisonous. Not in our yard but in the neighbor's (who I suspect is poisoning the feral cats, because suddenly many of them are gone). I have no evidence, and besides, it would mean she'd gotten into his yard. Needless to say, our kittens will not be allowed outside.

Lucy was adopted from our local shelter, having been selected by Sierra. She was fantastic with kids, and even starred as the "evil cat" in both of Sierra's movies, "Twinkle Dogs" and "Twinkle Dogs 2 - Revenge of the Evil Cat". (We will be posting them online someday.)

She was definitely cast against type in those movies - she was the sweetest cat in the world. She used to accompany us on walks in the neighborhood when we took the dogs out, slinking from yard to yard like a commando. She purred like a Ferrari, and could be held upside down by three year olds. Lucy never stuck a claw in anyone even though there were times I certainly would have.

I miss her so.
Typed in a hurry by Unknown
Email ThisBlogThis!Share to TwitterShare to FacebookShare to Pinterest
Labels: Lucy

Thats always sad when a pet dies, even more so when it coulda been prevented. Hugs to you and your family.

So sorry for the loss of your sweet kitty cat!

I am so sorry - she sounds like she was a sweet kitty.

I'm so sorry. I lost my cat in April, though he was older and had cancer. I'm glad you'll be keeping your kittens in -- I firmly believe that staying indoors is the best thing for cats. There are plenty of dangers for cats outdoors -- cars, predators, other cats -- but I think it's awful that you have to wonder whether your neighbor poisoned her. I hope they get the deserved dose of karma if they did.

Heart is breaking. I'm with you. This is so sad.

OH! I am teary eyed and know too well the feeling of such a sweet kitty gone. Just lost my kitten too, this year.
So sorry...take care.
You loved her and she loved You!
KK

Lucy Little Star, what a pretty name, and she was a star, in your lives (and in the films your daughter did). I'm so sorry for your loss.

I'm so sorry Breathe. Miss Lucy sounds like a truly awesome cat. Keep her memories alive in your heart, so that she will be near always.

Hugs from our little corner of the world to yours.

So sorry your lovely Lucy is gone. It sounds rather like she got into mouse bait, warfarin. Ted and I were just saying tonight that it will be a really sad day when our Bubby cat goes; we've had him 12 years and he has been through thick and thin with us.

omgosh what a good cat she was! why do the good ones have to leave us early?

I am so sorry, nothing I can say be make it easier but know I am thinking of you.

Sorry for your loss. It's never, ever easy. Hope the kids are okay.

Oh, I'm so sorry for yall! She sounds like she was as sweet as she was beautiful.

So, so sorry to hear. I know you've lost a beloved family member.

Really hope she wasn't poisoned. That would make me crazy.

Bye Bye Lucy. You will be missed by your human family :(

This is very sad. Cats love to go out so much, yet the outdoor world is so dangerous.

Awwww....what a sweet tribute to your kitty...

I am sorry for your loss...

Oh, I'm sorry to hear about your cat. I really hope she wasn't poisoned that would be horrible.Sorry for your loss.

Gosh, I am really sorry to read this, Breathe. Sending you a virtual hug.

I'm very sorry that you lost your sweet Lucy. She sounds like she was a wonderful kitty.