Day Four in Stop the Buck

The online course I've been using for stopping the buck in Canyon is at day four. We are refining control.

One aspect is focused on getting your horse to drop his head at a stop, then at a walk, then at a trot and, eventually, at a canter. So far I was able to get Canyon to drop his head at the walk consistently and had moved on to the trot. It took a while, but I got three consistent "head sets." (the horse pictured is a high end western pleasure horse with that low headset and nice bend at the poll). Yay!

The next thing at this stage is to work on a serpentine move, going two steps left, then two steps right, over and over making sure he relaxes his neck. I'm looking forward to working on it, only there's one problem.

I have no time. School is starting, I've had to travel for work, life has just sucked up all the free time and replaced it with a never ending to-do list. I'm heading over to the stables in the morning to brush him, fly spray him and ... that's probably it. But I'll have some mornings to myself this week and I plan on heading out and doing some riding.

A friend asked when was the last time Canyon bucked. It's been two months. But I haven't really pushed the situation either. Sure, I think he's improving and learning some control. But I've got a long way to go. I read something in a recent Parrelli newsletter (if you don't subscribe to them, you should. they're great. You can see the latest one here) that gave me a sense of how long I'll need to work on Canyon's confidence on the trail and belief in me as a leader:

Here's part of the question:
This describes what happens with Canyon perfectly. I never ride him alone, both because of the buck (I think it falls in the 'ride only where you can' category), but also because I know he is very nervous if we are without a buddy, any buddy.
A year. wow. Course Linda Parelli has 40 horses she can ride. And she rides nearly every day. Maybe I'll have it done in 5 years. Sigh.

She talks about some ground work then continues with a tip I'm going to try this week:
We'll see how it goes. Like all things, real progress takes time.
Typed in a hurry by Unknown 1 comment:
Email ThisBlogThis!Share to TwitterShare to FacebookShare to Pinterest
Labels: bucking, horse training 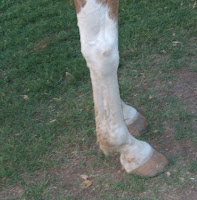 If there's one thing I really believe in when it comes to horse health, it's spending money on the hooves. Like the commercial says, you've got a lot riding on your tires - I figure with a horse, it's all riding on those tough toes. So I've always shelled out a little extra for a good farrier.

Recently I changed farriers, mostly because the one I was using lived pretty far out and with gas prices I needed to get on with a farrier on this side of town. Through a crazy set of calls and connections, I found Donnie Walker. 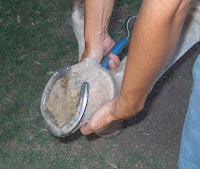 Donnie has been shoeing horses since he was in high school, and kept it up through several careers. Now he specializes in lame horses and uses something called natural balance shoeing.

Apparently there's a great deal of debate about whether natural balance is better than other forms of shoeing. I'm too much of a newbie to speak to it other than what I've experienced now that Canyon is in these new shoes.

One thing I noticed immediately. Instead of landing on the "toe" part of his hoof, Canyon is now landing flat. Try this: watch your horse at a brisk walk. Follow a hoof. What hits first? Ideally they should land on their heel, or at least flat. Otherwise it's a similar feeling to you landing toe first, your toes slamming into the toe box of your shoe over and over. As a result of this improved landing, he is riding much smoother.

But one thing that is probably helping that is he's now wearing a special wedge shoe for a dropped heel. 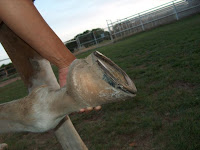 Donnie pointed out that Canyon had one shoulder more developed than the other, something someone had mentioned before when I was fitting him for a saddle. The he showed me his alignment. I could see the difference most clearly in his knee, one was nearly 3/4 of an inch lower than the other. Dropped heels are pretty common in horses, and can be a precursor to more serious problems. Or not. Just depends. But given some sensitivity Canyon was showing (see #2 below) I suspect it was beginning to be a problem. So now he's in one platform shoe.

Here's what I've noticed since Canyon's been in his Nike Airs:

1. No more stumbling. Canyon was just stumbling for no reason, and it was getting worse. Now he doesn't. He went from awkward to stable (pun intended).

2. He doesn't fret when I pick up his right rear hoof. He was starting to resist after being really good at picking up all four. Donnie said alway think of your horse's hooves on a diagonal. If you are having trouble with the right rear, check the left front. Sure enough, that happens to be the one on Canyon with the dropped heel. I had never found a rock in it, or anything else to explain why it was bothering him, but now I wonder if it was starting to get sore.

3. It's much easier to pick out his hooves, but I think that's probably more about the quality of the trim.

4. No clicking. If your horse clicks or overextends, it's the shoeing. At least that's what I've been told.


Natural shoeing is not much more expensive than regular shoeing. In my opinion it's a lot cheaper than a lame or hurting horse.

Of course if you aren't riding on limestone all day, I'm told barefoot is best. Still some horses seem tender footed even when they've made the transition to being barefoot. We're pretty rocky in our area, so that may be why.

Special thanks to my hoof photographer, Mireya Brisa, pictured here with the ever flexible and tolerate barn cat, Chester.

BTW, here's a cool illustration of what your horse's hooves should look like properly trimmed.
Typed in a hurry by Unknown 3 comments:
Email ThisBlogThis!Share to TwitterShare to FacebookShare to Pinterest
Labels: farrier, hooves, horseshoes, natural balance shoes

Here's a story of a horse lost then rescued during the wildfires in California.

Not only did the horse find fire fighters, but they got him out of harms way, got him to a vet who RECOGNIZED him and they returned him to his owners.

That's one horse with a fairy godmare.
Typed in a hurry by Unknown No comments:
Email ThisBlogThis!Share to TwitterShare to FacebookShare to Pinterest
Labels: news

Horse play and the low man on the totem pole

The one aspect of horses that's the hardest to deal with for me is the battle between the geldings. At one point I was working with the top horse in the herd who was just picking on everybody. Now I have the horse that's being picked on.

I came out to work with Canyon and started to brush him when he suddenly set back. He hasn't set back in months. I thought he got spooked, so I untied him and did a few circles with him on the ground. Then I went back to brushing and he jumped (but didn't set back, those circles worked). Upon further inspection I realized he'd gotten hit in the back. I could feel the heat and the swelling.

The first clue should have been when I took him out and it looked like his withers were so much higher. He was holding himself so differently his conformation actually looked different.

I borrowed some mineral ice, gave him some bute and called the vet in the morning to make sure there wasn't anything else I needed to do.

This isn't the first time he's been beat up on. He went through a period there when he looked like he was experimenting with scarification. They switched horses around, and he did okay, then he had hives, was sequestered and since he turned back out with the others he's had a few more nicks and bites.

But this incident scared me. I wondered if he could be permanently disabled by his struggles as the herd geek. Having been a geek as a child and barely surviving the experience, I'm probably overly sensitive about it.

Since there are a few open pastures, I asked them to set him out on his own for a while, or set him out at night only. I don't think he likes being set out by himself, but until we can find him a quieter gang to run with I think I prefer him to be a lone gelding.

Someday we'd like to get our own place with another horse on hand. Hopefully I can either find a good match, or a divided pasture.
Typed in a hurry by Unknown No comments:
Email ThisBlogThis!Share to TwitterShare to FacebookShare to Pinterest
Labels: herd, injury
Newer Posts Older Posts Home
Subscribe to: Posts (Atom)