Hi. This is Smokey.

Mom is still on the down low. Or low down. Or whatever you call it, but I insisted on sharing the crazy thing that happened a few days ago.

We had not done the whole saddle thing for ages. Like FOREVER!

It was a week.
Hey!
I thought you weren't going to talk.

Someone has to keep you honest.
Whatever. Okay. It was a week. And you know how it is after that much time. The whole thing seems all new and stuff. She made me stand still, which seems pointless, if you ask me. Every time I'd move just a hoof out of place...

You were on the entirely other side of the trailer.
Distances can be deceiving. I think it's because you use that black lead rope. It throws off your depth perception.

::groan::
Ahem! After wards we went over to the orange sand circle. It was fine except that there was a HUGE monster behind the tree. Here's a drawing. 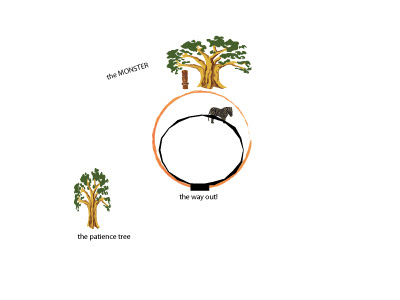 See the black line - that was the sensible path to follow given there was a monster laying in wait for some poor unsuspecting horse to wander by.

But nooooo. Somebody had another idea. I was trying to sort of just

ignore my cue?
I wouldn't put it that way. But clearly you were crazy.

and determined.
Right. So after she dug her spurs into me...

I don't even have spurs.
What. ever. Anyway, I obliged, despite my very reasonable concerns.

Then it happened! There was a huge dog lunging the fence, about to devour us! It was barking the "You are my DINNER" bark! Right when we were at that very spot! 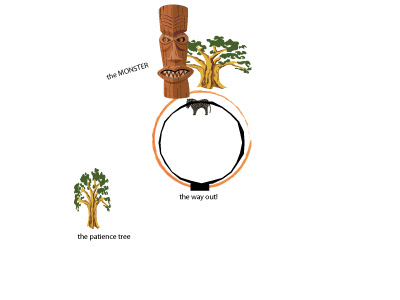 I was RIGHT! There was a monster there all along!

I could feel it's hot breath, the fangs rattled on the bars, which were bending under it's enormous paws.

Fortunately for all involved I knew exactly what to do. 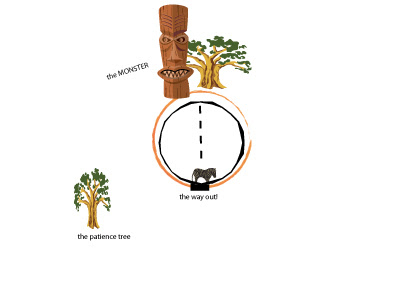 I went over to the gate which is how you get out! Aren't I smart?
I told you 50 times, it was my CELL PHONE.

Was not. Your little box sounds like bugs. Sometimes bells.

DH's ring is bells. One is set for crickets.
But Sierra's ring is barking dogs.

And you know what? We didn't leave! We kept going over to the monster over and over!
Tempting fate! That's what we call that nonsense!

We had to end on a good note.
Hey, having the presence of mind to move to the gate? That's not a good note?

That was spooking.
Was not! Was clearly higher level thinking!

Sigh.
So after we completed some
maneuvers and calmed down...
Right. After all that, I had to do all this fancy stuff around the cones and FINALLY we got to leave. Then when we were walking back mom's little box was making all this noise like it was a barking dog. Isn't that weird?

I was trying to desensitize you to it.
Everybody knows there aren't monsters on the way back to the barn. Yesh. It's just a little box that makes noise. Didn't even sound like real dogs. Thing is darn annoying. I don't know why she even has it.
Typed in a hurry by Unknown 20 comments:
Email ThisBlogThis!Share to TwitterShare to FacebookShare to Pinterest

Things are a bit rough at our place - non horse related.

So I'll be taking a bit of a break from blogging. Let's hope for quieter rides ahead for all those who need it.