We are home - at our lake home. The place is a bit of a wreck, but we aren't holding it against her. Actually, I was feeling pretty sorry for myself, but something changed recently. My house became a bit of an abused friend, who you realize you should never have abandoned. Now I'm working every day to bring her back, and with her, myself.

DH has moved back from Arlington where he was working, and even though he doesn't have a job, we decided anything is better that being separated, better than everything falling on my shoulders. So we are all under one roof again as of this week. We have a garage full of things to unpack, roomes still left to paint.

But it's coming along, it's coming along. Yesterday we replaced the sconces that were broken by the renter. Today I unpacked four more boxes. I have tendenitis (I think) from painting. We are turning rooms from half finished ruined monstrosities to our home again.

So much to do.

Lily has stayed at the ranch, my friend offering to let her stay there for the cost of hay. A real blessing. I went to see her today, the rain has turned the paddocks into mud pits, and she's done her best to turn from paint sorrel to bay.

She's in the middle of a love triangle, the bay arabian mare out there trying to pick who to hang out between her and the paint gelding. Lily, as usual, takes it all in stride.  Speaking of stride, she is sound, the egg butt shoes are making a real difference. We are enjoying one another again, she loves being a single person's horse. She's even going out alone with me.  It's lovely.

But I wish she was outside my door right now. Maybe someday. But not a day I can see from here, frankly. I try not to let it get me down.

It's hard, some days.

Getting the house in shape has been made a little more difficult by all the travel I've had lately. So I thought I'd return the favor of all the fabulous rides I've been on with everyone and give you a ride through the more interesting sky I flew.

I always try for a window seat when I fly. But often times there's not much out my window. Sometimes we are deep in clouds, everything in a cloud is just gray endless fog.

But this time it was my favorite kind of sky. Where the clouds themselves are a landscape. 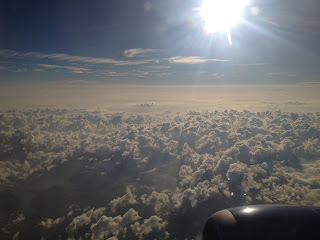 Carefully hiding my cell phone, I began snapping pictures (we weren't quite at the 10K foot mark) 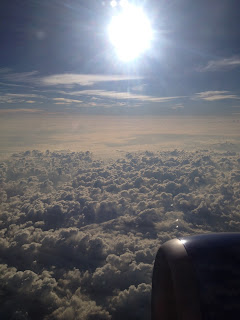 What was stunning to me was this space we were flying in, the thin layer between the popcorn floor and wispy ceiling reminded me of the poem by Octavio Paz, Between Going and Staying, where he beautifully describes being suspended in time.

It's a poem I've memorized (I've been dealing with my stress levels by memorizing poetry, something I strongly recommend), here's a bit. 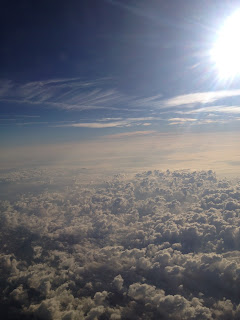 Between the going and staying, the day wavers, in love with its own transparency.
The circular afternoon turns into a bay where the world in stillness rocks.
All is visible and all is elusive; all is near and can't be touched...

Click here to read the whole poem. Translated from Spanish. 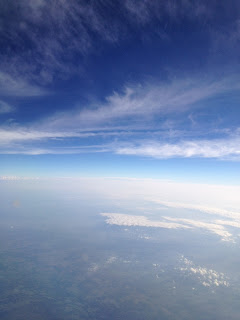 Soon enough we left behind the lumpy floor and slipped into flattened layers, where the clouds looked as thin as dimes and where the world's curve beckoned us forward. 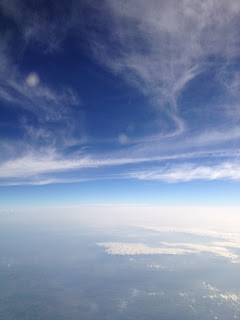 Wind currents drew shapes in the light bits of dust above us, carving the sky's poetry where only we could read it and wonder at it's creativity. 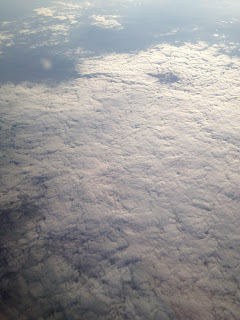 Below us  a sudden patch of flat clouds appeared, reminding me of spilled flour. When Mireya was young I gave her a whole shallow pan of flour so she could "draw" on it, so she could feel the lines as they left her fingers. 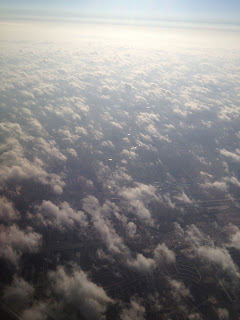 Soon the world below was peeking through, reminding me of the landscapes that house all I hold dear. The ground we would touch again, wheels screeching, metal holding its wide hands against the wind helping the plane transform from creature of the sky to lumbering giant of the ground. 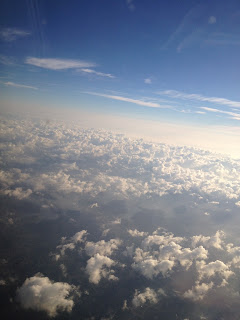 Yet some of me would remain in the sky, between layers, in the fold between fingers of the sky, where the wind shapes the dust into hundreds of different landscapes, where heat, cold, and the thinnest air holds wonders.

Which you can see if you score a window seat.