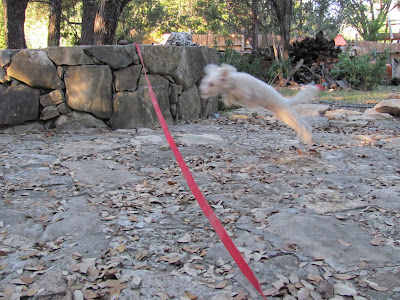 This just makes me smile. So I thought I'd share
Roxie, the rocket, in mid agility leap
Every day I've gotten a wonderful message from someone in our little community. A little voice of support, a virtual hand at my elbow.

While we climb this hill before us, while I struggle through my fear, I'm very grateful for you, reading this, lending me your prayers, your support, your encouragement.

I'll be trying to post more often, I feel ready to talk again, but I wanted you to know that your presence hear has yanked me through an opening I was just peeking through.

You're right, of course. Staying calm on my frightened horse is an incredible metaphor; perhaps even a message if you believe in these things (I do) for how I'm to get through this.

And, in the company of friends and family, we will get through it.

Thank you for being here for me.

Winter
Typed in a hurry by Unknown 13 comments:
Email ThisBlogThis!Share to TwitterShare to FacebookShare to Pinterest
Labels: gratitude

It's ironic that the first story I have to share is about my horse running away.

I've wanted to run away for about 6 months, maybe longer, as my life away from the barn spins wildly out of control. To make a long story short (and to allieviate any concerns about our family health), our business has failed, taking a great deal of our own financial well being with it. It's a storm we continue to ride out and only time will tell the final toll. Many aspects of our life are tangled up in it and it remains too painful to talk about. So I won't.

Instead I'll tell you about my runaway horse.

Check him out. Doesn't he look calm? 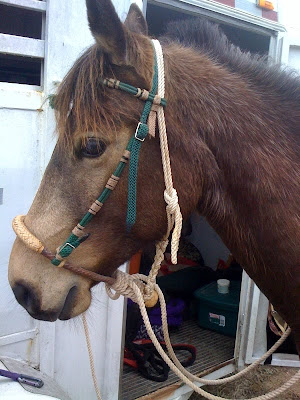 Smokey in his bosal, which is NOT what he was wearing
during this freak out. Today we were testing it out a bit in
the roundpen. I don't even know if I have it on correctly... Feel
free to comment!

For various reasons I haven't had much horse time and each time I see Smokey we remain in a sort of holding pattern. Some things are getting better, but it's a very slow pace for both of us. He does seem glad to see me, and he is doing much more sniffing of me, which to me strikes me as a level of familiarity and friendliness. He never bumps me or rubs.

We were out on a ride after a week off. I was alone with him, on a windy day. We haven't done much riding alone at all, but I wanted to spend some time in the saddle and no one was around. We worked in the round pen for a bit, then did our circle work around the power pole.

Then we hit the trails behind the barn. Smokey was a little up, and I worked on moving his feet. The wind was the worst kind for horseback riding, IMHO, the unexpected gusts. Still he did well until we made up around an upper fenceline.

On the other side of the fenceline is the neighbors' barn. This is usually an area of concern for all the horses, sometimes the OTTB is out there, other times people are milling about, and often things have been moved around. No one was there today, and we went past it when a gust blew up behind us and I felt Smokey gather under me and take off.

I was too late. I hadn't checked him in time. We were galloping off, escaping whatever it was that was behind us.

And for the first time in my horse life I recognized what I had to do. We were zipping around an area with a large number of cedar trees. In my mind a one rein stop was not an option - we already had too much speed, and my horse was very likely to run himself (and me) into a tree in this area.

And I was not.

I tried pulsing the reins, right and left, but knew he was headed to the barn. Smokey was running, but not bucking, not trying to scrap me off on a tree. So while he was in a panic, he wasn't trying to dump me.


I remembered the countless times I've asked trainers about this, about what to do in a bolt. I've been more worried about it because a young horse just doesn't have the experience to know what to do, and without others around, well, he's going to respond instinctively, rider or not.

I remember Mark Rashid saying he used to tell people to ride a bolt out, but then he started working with more and more backyard horsemen and ... well, the inference was that many people weren't likely to be comfortable to ride out a bolting horse. I remembered riding through Smokey's static attack in the clinic, how he just needed to move. How Mark said horses run out their emotions, their stress.

In those seconds I knew that the right thing was to ride this out, to let his panic run it's course while remaining calm and centered for the run.


After one sharp zig to the right I grabbed the saddle horn with one hand and held the reins softly in the other. I talked quietly to him, and as we got closer to the barn I could hear the other horses in the paddock kicking up and running. Someone in the herd was running, they could feel it, so they started to run too.

Smokey in his panic actually ran past the barn and I slowly directed him back, at least I tried to steer him, support the direction he was heading. He high stepped in front of the others who were by now stampeding all around their paddocks, and I slowly brought him back into my hands. We walked along the barn area, back to the light pole. Quite quickly he settled down. I was a bit surprised by that, but it went to reinforce what I'd been told.

Then we went back on the trail. He was alert, but this time we walked toward what scared him and this time I was ready.

A tarp covering some equipment on the other side of the fenceline had come loose. I realized now that when the wind blew behind us the tarp rose up into the air like a giant blue hand.

We worked all around the area, circling trees, bushes, going closer, then backing up, then closer again, until he seemed to calm down. Then we went on our little trail ride and it was one of the best ones we'd ever had alone.

We have a lot of work to do. He shouldn't have bolted at all, and I know that. He's almost 5 years old, and this is partly that, partly the lack of time I'm able to spend with him now. But I felt like the way I handled it may have done us some real good.

Or, at least it did me some good. Because now the thing I've most worried about - that my horse would bolt - is not a big worry. I know I can ride it out. And that we can keep riding afterwards without me being angry or afraid and with my horse having more confidence, not less.

These days, I'm counting this one in the win column. It's a bit lonely in that column, so I have to take what I can get.
Typed in a hurry by Unknown 31 comments:
Email ThisBlogThis!Share to TwitterShare to FacebookShare to Pinterest
Labels: bolting, fear

A Glimpse of Snow 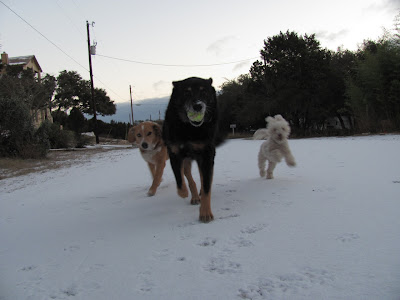 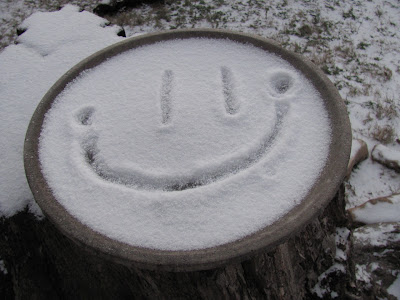