Camping with Lily at the Storm Ranch Ride

Hey folks. Lily here. Me and Miss B went for an adventure. Tell you what, it was about time. I had to give Miss B a little bit of a hard time about getting in the trailer since there wasn't anybody else in there.

No kidding. I thought you were going to
run over me for a second.

Well, you didn't have to get all physical on me.

Girlfriend, if you're about to run me over,
I'm getting physical.

Fine. I jumped right in after that, didn't I?

It was quite a sight. I was worried you
were going to run through the back wall.

I can move when necessary. And it was really necessary. But between you and me I was ready to get the heck outta dodge, if you know what I mean. We got these two new horses and there's a bossy skinny mare now and couldn't wait get some space from that attitude, know what I mean?

I don't think I've ever seen
you so happy to get your halter on.

I'd have put it on myself if I could've figure out the knot.

So here's the thing about the trailer situation. When I ride in the trailer solo, I like the back spot because it's closer to the door. I don't mind the ride, but when it's time to exit the trailer, I waste no time. And if it's a long way to the exit, it makes me nervous. Now, I don't get nervous since Miss B loads me right there with the door on my tail.

Everybody's happy. And no one
is getting run over, either.

When we arrived I decided immediately that this was a real good place. Grass was EVERYWHERE.  Miss B  sets up her electrical yarn thing and I notice we are under a big tree.

That's thanks to Miss Donna. She got there early.

It was a nice spot. Plenty of company, lots of hollering, nice shade. Tough not to like. Then Miss B said we were invited to go on a short ride. We don't do much long rides since my shoulder is a little touchy, but I was excited to hit the trails. It's been a long time we've been somewhere new. We were going out with Miss Donna and her little "I think I'm still a stallion, look at me" skinny horse. I give him the eye roll treatment. Please hon, I like a horse with a little meat on him, ya know?

Oh geez. Are you in heat, again?

Not yet. But it's always around the corner, you know.

Anyway, we hit the trails and pretty soon we hook up with two more riders. Before you know it, we are trotting down the trail. I feel great! I show these horses how to make some time in a nice long trot that would've brought some ribbons in the show ring. They are all young ones, so I ignore all their snorting and dancing around. Trail's calling, boys, we got miles to go, don't go wasting energy!

You were very calm. Everyone was
impressed. Even about the chair.

It was a chair. Goodness, you'd think these boys never been out of the barn. I took the lead a few times, then had to circle back when I out trotted them and they got worried. But I felt great. Trotting all that time, no problem! 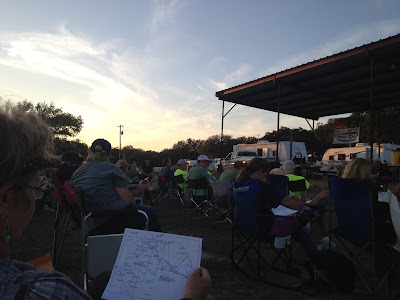 We headed back and had some food. Miss B and Miss Donna went to the rider's meeting (which they should really send the horses to, in my opinion, since they're doing all the work).

Can't argue with you there.

Darn straight. Another thing I like about camping is I get all kind of special stuff. Extra carrots. Watermelon. That kind of thing.

At least I gave them a try. Next morning, Miss B went out first thing to do something called scribbling...

Scribe. I was the scribe for the
vets at the vet check.

Well, I tried to be neat,
but they talk fast...

Like I said, you were scribbling. I worked my way through my hay. Every now and then a real sweaty horse would come back, saying they'd been riding for miles and miles. I was a teensy bit sore from yesterday, but Miss B said we'd ride around camp later, just looking for some grass or something. 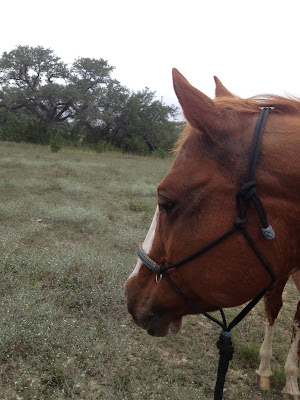 We rode a little, but I don't know, I just was off, I guess. Miss B took off the saddle and after lunch went for a walk. I think Miss B wanted to see how I was doing. We found some nice flowers.  But when I did some circles to the right I was feeling it a little, so we figured it might be time to take it easy.

Still I trotted those trails. I'm on the road back, I think.
I hope so. 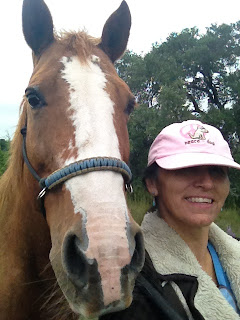 We're both ready to head out for more adventures.

Typed in a hurry by Unknown 12 comments:
Email ThisBlogThis!Share to TwitterShare to FacebookShare to Pinterest
Labels: horse camping, Lily 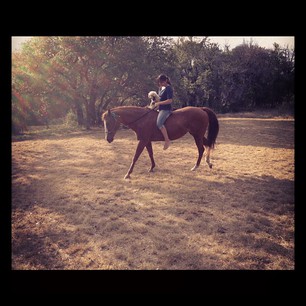 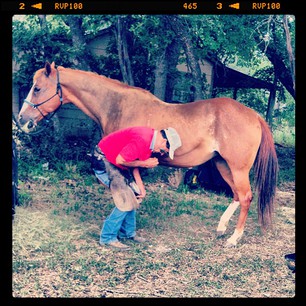 Damned if I know which. But it is something to think about.
Typed in a hurry by Unknown 4 comments:
Email ThisBlogThis!Share to TwitterShare to FacebookShare to Pinterest
Labels: Lily, respect
Newer Posts Older Posts Home
Subscribe to: Posts (Atom)