Another Horse? Hey, you don't have to tell me twice. 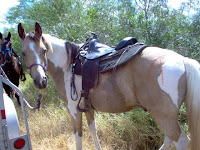 Canyon, wondering what the heck that is on his butt.

We need another horse. And it’s all Woody’s fault.

It’s here I discovered something about myself. I’m not exactly the person who “works” a party, meeting people. However, that perfectly normal level of shyness disappears if you put me around people on a saddle. I can talk to anyone on a horse. By the end of the trail ride, Rudy asked me if I knew all these people.

“Well I do now,” I said personably.

Our whole family, Sierra, 10, Mireya, 6, and Adam descended on Rudy’s hunting cabin at midnight on Friday, unloaded horses and prepared for the next day, when we’d be on a 12 mile trail ride finishing off with a parade.

A parade! Yes, I’m still about six years old. I love parades and there’s nothing better than being in one. Being the waver instead of the wavee is definitely the way to go.

So needless to say, I was pumped. We woke up early headed down another series of farm to market roads to the start of the trail ride. Dozens of horses were being unloaded from trailers, horses that looked like they would have been more comfortable chasing down cows instead of following the porta potty trailer. The trail ride was part of a celebration of the ranch community in South Texas - which is bigger than I ever realized. Hey, they even have a web page.

I’ve never registered for a trail ride before, and I was a little taken back my how the horses were shown as official entrants – a very large orange x was drawn on every butt.

“Are they marking them for slaughter?” part of our horse crew asked. One person decided to take advantage of the availability of the marker and added “for sale” on his horse's hind end.

This event is an annual ride from Realitos to Concepcion and there were well over 100 horses there, all in various stages of training. Our daughters, who watched a man trying to ride a mare that broke a lead when they tried to bit her and bucked him off when he got in the saddle, decided to ride later in the day when things had calmed down. All kinds of riders were out too – some were riding for the FIRST TIME.

Okay, maybe I’m crazy, but IMHO the first time you get on a horse should not be on a 12 mile trail ride. Heck, most of these HORSES hadn’t had the experience of riding next to a road for 2 miles, let alone 12. So they all spend some time early on with spooking at bags, other horses, trailers, and in the case of Canyon, doors that slam on the port-a-potty trailer when you are walking by it. It’s a place where it’s good if you’ve got a halfway decent seat.

And boy, are you are going to be in it for a long time (which is why I’m very grateful to the old cowboy that taught me to ride side saddle for a bit to save the buns). Can you imagine what it’s going to feel like to walk the next day if you’ve never done anything on a horse? Could you even move?

Fortunately the entire way there was a long line of support vehicles to provide water and adult beverages, trailers to pick up sagging horses and riders, a small dog that rode on top of a golf cart as a surreal mascot, and loud ranchera music floating out under beautiful blue skies, white puffy clouds drifting by on a light breeze. We even stopped after six miles for carne guisada and water for the horses.

I am so hooked. And so is Adam, who rode Woody for half the ride and had to be pried out of the saddle. “I want my own horse,” he said. “I love this horse. You’re going to have to buy me a horse.”

So now I wonder – do I get another horse sooner rather than later? And therefore do I keep Canyon? AHHHHHHH! I’m going to drive myself insane. Of course we probably have to wait to get our own place because board on two horses is waay too much for us. But that hasn't stopped me from looking. I'd like to find a tennessee walker or other gaited horse because he has a really bad back...

Canyon did well, kept going on a fast walk like the forward-aholic that he is, but behaved perfect the entire time, spooked just once in place. Sierra rode him for a mile or so, then rode double with Rudy’s daughter, Victoria, who is a new rider and somewhat skeptical about horses in general. It’s fun to ride double when you’re a kid, light and thin. Canyon’s Arabian heritage was shining through, he wasn’t breathing hard, plenty of sweat but no foam (Woody did great too, that horse is so athletic, I think he could have done the whole thing three more times).

In fact, the biggest challenge with Canyon was on Sunday when we were loading for home and suddenly the fly mask he wore for the trip down was the single most terrifying thing he had seen in his life.

(This is not what his fly mask looks like because I'd probably never be able to get it on him without laughing myself into a pile of manure. There are some pretty scary people in horse product development.)

What was THAT about? I knew he was concerned about leaving his buddies so we could load up, even though they were loading too. But the new place seemed to give all new dimension to “buddy sour.” I lunged him for five minutes, patted him all over with the deadly fly mask and eventually got his focus back on me enough to get the fly mask on. Suggestions are welcome on what I should have/could have done.

Also, I learned that Canyon likes to travel backward in the trailer. I don’t tie him because of something I read in a John Lyons book, so he can turn around, stand at a slant, basically make himself at home for the ride. Apparently he likes to feel the wind in his tail.

Two things you might try are lunging while constantly changing gaits. This helped calm Goose down tremendously. Second, look up extreme friendly game from Parelli. Its a good way to desensitize horses. I recently started it on Goose and he has made tremendous progress in just 3 sessions, although he broke away from me on Saturday. Oh an make sure you practice your emergency stop, in case canyon really decides to move out. The one good thing about Goose is he IS very responsive to training, so he will loose control and bolt but is easy to shut down. But I practice flexing/emergency stop a lot.

I haven't been doing the changing gaits - I'll give that a try. Thanks!