Courage a blade at a time 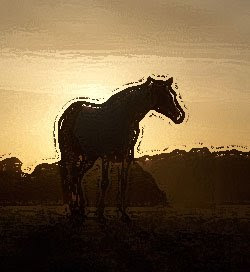 We went out for a ride around the stables. There is something about riding in that familiar area that makes Canyon less confident. He sees lions everywhere. In fact I'm always more sure of a quiet ride when we go someplace he's never been before.

Why do some horses lose it in familiar trail surroundings?

I'm having a hard time finding the logic of it. Maybe it's something like parenting. You know how your child is always better behaved with strangers? They can't take a chance that they might be with someone less likely to accommodate their behavior. Or maybe they have to test the waters. Or maybe they know that they are in a less safe situation.

Is that what it is with horses? When we are at a new place - a different trail, anywhere away from the stables, Canyon is calmer. Still nervous, sure. But in general he's more calm. Does he decide he has to trust what he can (me) since everything else is strange and new?

On the trail ride around the stables there's an area where it's safe to lope. When his energy goes up, though, his nervousness escalates accordingly. I finally did the right thing on this ride. When he was in the middle of a panicky high headed run I didn't try to stop him. I spoke calmly and brought my energy, my seat and my emotions way down, then gave only a gentle pull on his brakes. And he came back down, albeit not right away.

It was the hardest thing I've ever done.

I found this quote on a site:

The problem with training nervous horses, versus working with an animal that has a bad attitude, is that nervous horses are not attempting to misbehave. They have no real reason for being scared, but they are, which makes the rider’s job much more difficult.

Great. So I'd be better off with a brat than a scaredy cat.

After that high headed run and some calming down time, I spent time on the trail showing Canyon things that normally bother him. The dreaded horse eating rusted farm implement that was off the trail. Ooo that thing is scary. I dismounted and walked over to it and he seemed stunned that I wasn't devoured instantly. I put my hand on it. He stood far away, refusing to take a step. Finally I had to put a carrot on it to get him to touch it with his nose. For the rest of the time he'd touch anything with his nose, hoping for another carrot.

Horses are so shallow. LOL

Sunday we were out again at the Guadalupe State Park and he did great. He walked right up to the deer blind. He turned and faced the dreaded armadillo that squinted at us from a pile of leaves and branches. He had moments, like when he decided he'd better walk around the white pedestrian crossing lines painted on the road.

Which gave me an idea. I'm going to have a session with him in the arena with contrast. Tarps, blankets, things on the ground that contrast with the ground. That really seems to be what worries him consistently. I've had him side step dark patches of ground so quickly I've nearly lost it.

So I'm going to work on leading him through each high contrast spot, first driving from the ground, then from the saddle. Course I'd love to build one of these confidence courses. But that seems like overkill for one horse...

Or maybe not. He's over my bag of scary stuff that I used to desensitize him (a cheerleader with a pom pom is completely safe. We're good with towels and swimming noodles too.). It's time to step it up.

One of my gelding for sale ads was still up and I was asked if he was still for sale.

No, I said. I'm keeping him. Even if he's a nervous wreck.
Typed in a hurry by Unknown
Email ThisBlogThis!Share to TwitterShare to FacebookShare to Pinterest
Labels: horse training, spook, trail riding