First, let me tell you about this ride, this place, this world.

South Texas reminds me of where I grew up - except this is a world of ranches, not farms.

I'm hispanic and fifth generation Texan thanks to my grandmother's side of the family. My grandfather (who you can read about here by downloading the PDF) came here as a child, illegally, when his family was running from the death and destruction of the Mexican Revolution.

He came here and, in time became a citizen, farmer, small businessman, and wonderful father and grandfather.

Anyway, he farmed cotton in San Elizario, down the road from Ysleta, Soccoro -- all the lower valley of El Paso. It's a farming community that is a place where nearly everyone is hispanic (95% easily) and english and spanish fill the air, intermingled like cilantro in pico de gallo.

This is what it's like in South Texas, where Rudy's family has it's hunting ranch. The terrain is very different, the grasses grow long and there is mesquite and shrubs everywhere. I find it amazing that cattle run these areas, but you'll be driving along and there will be a cowpath, often with a irritated looking cow glaring at you for interrupting her morning meditation.

None of these cows look like Elsie. They look like they were raised only for meat, not for looks, and they look happy to argue with you about the weather, the politics, the feral hog problem, anything...

-------------
On the trail ride are these huge extended families, young, young kids on horses that look barely containable, heavy set women being hoisted atop quiet old horses, charros on stallions - horses with thick necks who look like they could plow through a solid concrete wall. Some groups have come in matching t-shirts, others in matching working shirts with the name of their ranch embroidered over the pocket. These are groups fiercely proud of their families, protective of their connection with the land and the life they've carried on here for generations, irregardless of borders, revolutions, droughts, and floods.

There are no helmets. Zero.

Horses arrive in long open trailers, six horses standing at a slant, no dividers, no top, saddled to go. There are some impressive rigs too, but the vast majority are cattle rancher trailers, built to carry whatever needs to be carried, all the red of rusty metal and dirt stained wood.

There are no fly masks.

Your coggins is checked and you're handed the list of 18 rules. It's the usual stuff - control your horse, no horse racing, stay behind the trail boss. The last one is telling, though:

No minors will be allowed to consume alcohol. (It's the law)

Seriously. Almost as if it's an apology. I understand this, of course, because where I grew up, if you were tall enough to slide your money across the bar, you were old enough for a beer. Trust me, I'm not saying it's right. Quite the contrary. But it is the world I grew up in and so it's oddly familiar.

We think there were 300 riders who took part in the ride, but it seemed like 3/4 showed up late.

This is also familiar. I grew up in mañana land - or, as we called it, the day after mañana land. 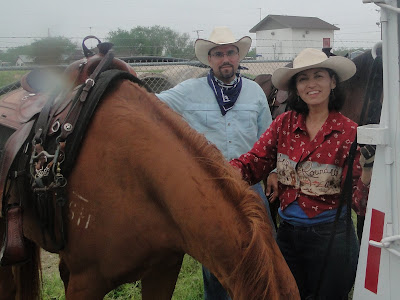 (before)
The horses. There were horses who looked like they had not only not missed a meal, but had been ordering dessert at breakfast, lunch, and dinner. Others were rippling with muscle, looking like they could take down a cow with just an exhale. But there were no horses that looked sickly or thin.

Most of the crew were quarter horses, although there was a pair of Andalusian stallions, a few Quarter horse crosses. Rudy's Vaquero was the only Paso Fino we saw and he got plenty of attention with that gorgeous gait - for 14 miles that horse would NOT flat walk. I rode him for about a mile and it was something else. 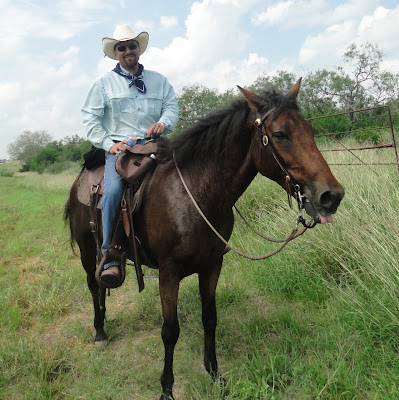 (Vaquero and Rudy, 10 mile point)
Rain was predicted, but not a drop fell. It was supposed to be cool, the temperature hit 97. We hoped for a breeze, it was still with 99% humidity.

The ride goes for 14 miles, there are frequent stops to try to keep the group gathered. It doesn't work though, the line of riders stretches out like a broken necklace, beads scattered over a mile.

Midway there's a long stop with a meal and watering at the Munoz Ranch ("Please no horses should be tied to any fence on the Munoz Ranch" reads the rules). 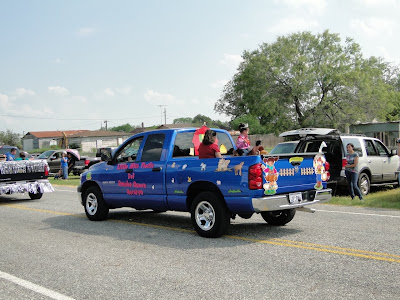 At the end is the parade, floats at the beginning with Miss Fiesta del Rancho waving to the crowd, her hair a raven's black in a complex updo. 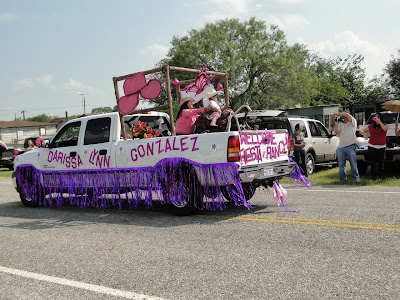 Then there's the Most Beautiful Girl and Most Beautiful Boy, both riding on saddles set in the bed of pick ups, paper flowers taped to the side. Behind them there are groups tossing candy to the crowds along the sides. 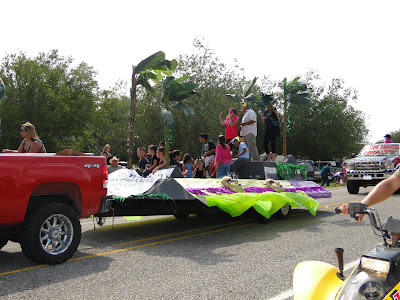 Tejano music booms out of a golf cart with a better sound system than I have in my car. Elected officials wave, the police officers have a huge orange Fox as a mascot. It jumps out and starts hugging children along the parade route. 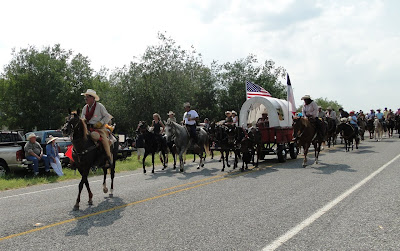 And then come the riders, some having changed clothes (and in a few cases I spotted even horses being switched) at the 30 minute stop before the parade's end, coming into town. 300 horses and riders waving to family, laughing, smiling, ready for a break before the night comes and it'll be time to eat, drink (again), listen to live music and "tiere chankla" (toss a sandal, or dance) until finally it's time to sleep. 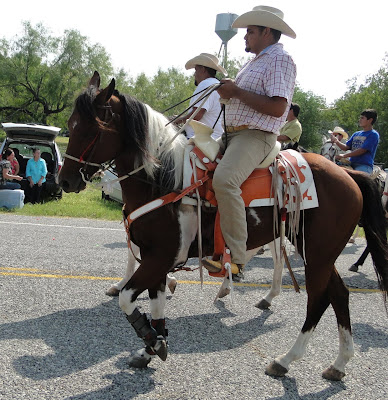 It's here I have gorditas, the only good gorditas (actually great gorditas) I've had since I left El Paso. It's a good thing too, because I'd weigh 300 pounds if I could find the darn things around here.

We have a dance and swirl on the dance floor, getting back to the ranch at 11, exhausted. 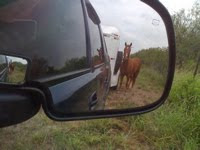 (after)
Typed in a hurry by Unknown
Email ThisBlogThis!Share to TwitterShare to FacebookShare to Pinterest
Labels: sometimes the light in the darkness is an oncoming train..., trail riding

I feel like I am there with you!!what a glory to be a part of something like that!

You have an amazing gift of a seasoned wordsmith. I feel like I was there too and could hardly keep from dancing when the gold cart went by.....

I *love* your descriptions! It's what I loved about Texas and what we love most about New Mexico and one of the reasons we moved here. That sense of family and tradition and culture that has been fiercely hung onto for generations.

People move here from the east coast and other places and they hate it and either leave, or try to change these people and this place and in turn, I kind of hate them for their efforts.

Here, people prayed for me daily when I was diagnosed with cancer, people I barely knew. They cared because we came into this valley with respect and politeness and appreciation for them and this land. It still makes me cry a little that our postal clerk prayed for me each time she put mail in our box.

When I still vended my jewelry at art events, I loved the slow pace in New Mexico. You were greeted politely, asked about your health etc if the person knew you, asked about the work with true interest and appreciation. Maybe they bought, maybe not, but it didn't matter because you felt you had made a friend before they left. Often, we would be invited to homes, given directions and expected to come. It wasn't the false politeness you get in other places.

In other places people are loud, demanding, in your face, complaining, wanting discounts for handmade work, no respect, no quiet slow pace.

I don't think I could live anywhere else anymore. Carmon

It's so nice to learn something about a part of this country that I know so little about. Your descriptions and feelings for the people and area where you grew up flows with appreciation and warmth. Thanks for sharing part of your world...I'm looking forward to reading more.

What a ride! THREE HUNDRED HORSES!! Don't know what comes next, but when I went on the "Half Ass" Ride, Red's first time out with 175 horses, 173 of which he'd never met, Red was a TOTAL ASS, not a half ass. Only time I've ever been actually scared was on the group beach ride when his buddy left him. Gave us a goal for the summer. Can't wait to hear part two.

This was a wonderful post, my friend. Your photos and descriptions painted a beautiful and interesting picture of a lifestyle many folks only dream of. I'm glad that you had the opportunity to be a part of that, too.

Thanks for sharing,
~Lisa