A Parade and a Miracle

It was not the best day for a parade. Not the worst, but not the best. Cold, with a misting rain.

Of course given the conditions in other areas I feel silly whining about 50 degrees.

Here at the lake there are three little towns surrounding the lake. Sattler, Startzville and Canyon Lake. Fourth of July parade is in Startzville, Christmas is in Sattler.

In the last two years a 'lake only' high school opened up and now we have a marching band and drill team for our parade. Almost as cool as when we got a second traffic light in Startzville.

But I've always loved seeing the horses in the parade the most. And this time I was part of the crew. No riding, though. I was riding in the back of our truck as poop patrol.

I wasn't riding Lily because we had two elves in the back of the truck and someone had to make sure they didn't fall. Sierra, in the meantime, was on the Girl Scout float (which was quite a production in itself).

So, shovel in hand, we prepared for the parade.

If you've ever been in a parade you know there's a lot of waiting around. And in the foggy morning behind the school, with horses covered in tinsel and bows, I was given a tiny little miracle. 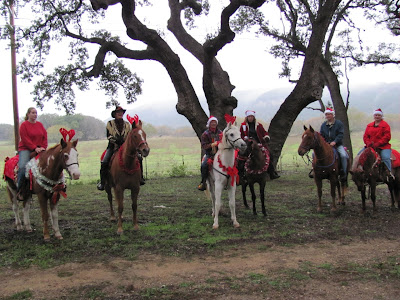 Davy and Kelly on Amigo and Chico.
You could set a firework off under
Chico and that horse would
not spook. 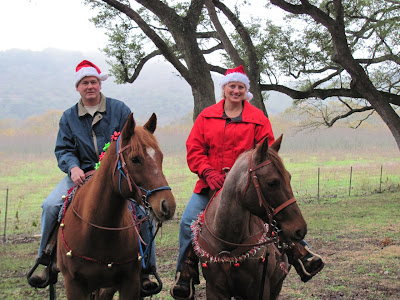 Our Barn Owner and Endurance rider
Donna on her lesson mare, Treasure. 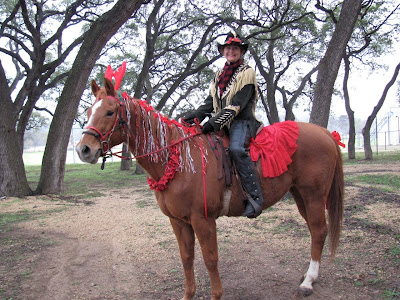 Anisha on Diego.
Diego is a great horse
even if he hates getting
in a trailer. 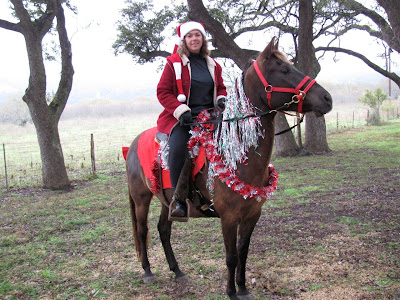 Lucinda on Cody,
another old reliable gelding.
And my miracle horse. 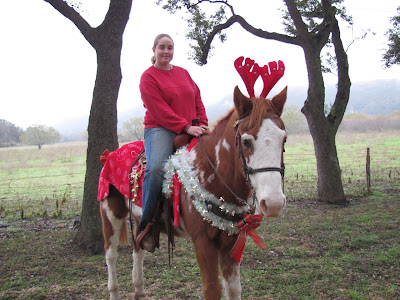 Nancy on Shiloh.
Shiloh is a 26 year old
gelding. We worry about him,
he is so hard to keep weight on. 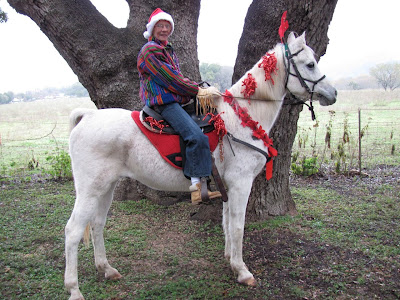 Then, suddenly our elves decided to venture out
and see the horses. Mireya hasn't wanted to
be anywhere near a horse since her fall from
Canyon. She hasn't been willing to even
pet a horse since that day. The two
times I took her to the stables she
stayed in the car. 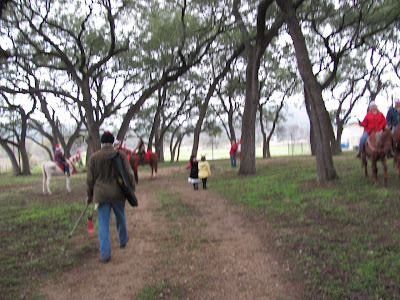 I've been despondent about it. There
didn't seem to be anyway to get her
through this, even though her own
drawings sometimes show her
riding a horse.

But she was with her best friend.
Sometimes we are brave with our
friends, certainly braver than with
our mom.

Then there they were, petting Treasure on the shoulder. 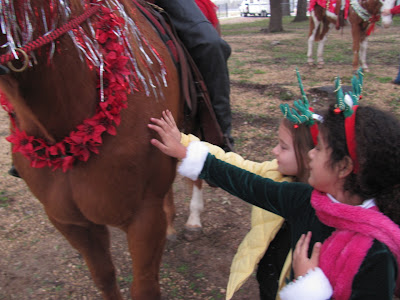 Then they went over to meet Cody. Cody
is DEAD broke. An incredible old
gelding.

And apparently, a miracle worker.

Because after petting Cody, Lucinda offered
to let Mireya's friend sit in the saddle. 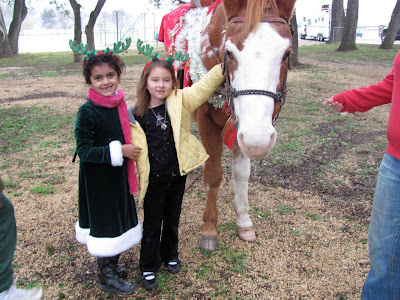 Mireya got ON Cody. 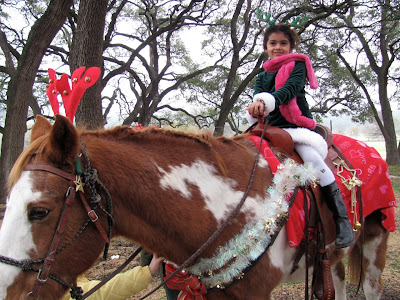 She got on a horse.

And I have hope.

Horses don't have to be her thing.
But I don't want her scared of them.

Maybe we're going to get there... 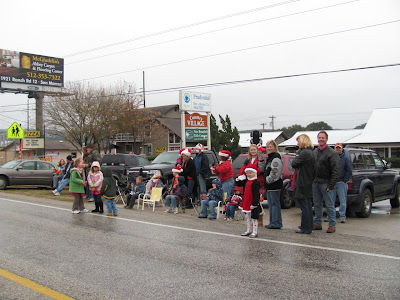 When you are IN the parade, your view is
a little different. 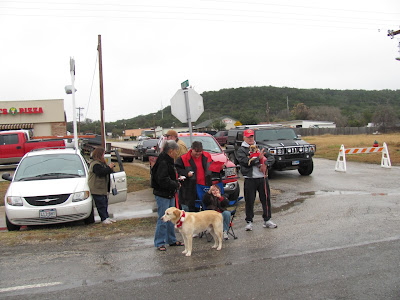 It was wonderful to shout Merry Christmas to all our
friends and neighbors who turned out in the
lousy weather, to wave to the kids, see Santa
and cheer for the pooper scoopers...

We offered everyone free fertilizer, but
no one took us up on it. Odd.


The fog had only partly risen from the hills... 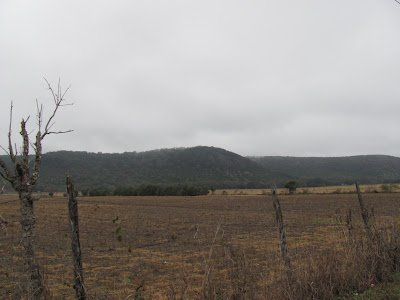 Our parade was done. And the streets of
Sattler remained clean. 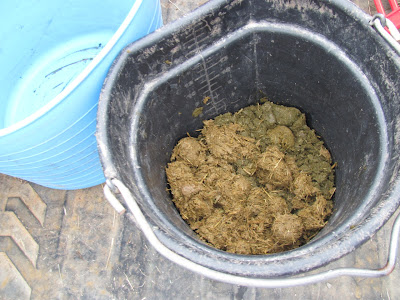 Note: Mireya posted about her accomplishment on her blog. :)
Typed in a hurry by Unknown
Email ThisBlogThis!Share to TwitterShare to FacebookShare to Pinterest
Labels: holidays, picture parade

This is great to hear. Maybe she was just waiting for the right horse.

So glad she was able to get back on a horse. Hope she continues to be comfortable

What handsome horses! All unflappable with all their Christmas foilage covering them, how great! I wouldn't worry about Mireyna...I didn't want to ride after breaking my shoulder on Jackson, but forced myself. And this is the girl who already LOVES to ride!! At what, six? I'd say she is going to be JUST fine! But it is hard when your kids don't want to be near your horses, I know. Miles fell off of Jackson right after I first got him, and it was MY FAULT so I felt really guilty! Now, two years later he will go and pet Jackson and ride Shorty. Jackson is too advanced for him, but Shorty is just right! And we so want them to enjoy it as much as we do, don't we? I mean, this is our passion and it is so nice when they can share in that! Like you, I won't mind if he doesn't totally share in my love, but the occasional ride with him is just so much fun! PS..He used to wait in the car when I went to the stable I boarded at right after his incident. Truly a Christmas miracle for you and especially for Mireya! :O)

That's amazing how many people showed up despite the weather. I left Mireya a comment. She's so brave.

I sure LOVE the snowflakes falling on your blog...to adorable..and when I got to the poop bucket..I was like...no, don;'t let the snow fall in there it'll get too heavy...um kac, it's a pic!

GREAT post on the parade and miricle too!The Christmas costumes probably warmed her heart up for the venture atop...bet ya...makes you want to make some other costumes and see if she may like to ride festively, at first?

Very nice day you had, though coldish~
KK

Looks like so much fun! I want to join the parade in my town now. And congrats to Mireya for overcoming her fears. What a brave girl!

That is so awesome and encouraging. I hope my own daughter can also get past her fears...and she's never even fallen from a horse, but was deeply affected by seeing me seriously injured twice from riding and hadling my mare. I was planning on getting her a pony for Christmas because she has talked about it before. But when I brought it up this weekend, she had a panic attack and refused to even consider getting a pony...or ever riding a real horse again. sigh.

Maybe if I get back up there again and ride...and I don't get hurt, she will consider being with horses again?

Now just to get past my own fears. If only just for my daughter.


Thanks for sharing the photos. The parade looked like fun, even frpm a pooper scooper's perspective.