Yesterday, our BO/trainer took Cibolo out and in no time he did exactly what he had done to me - crow hop to the side and a dance step I call the hindend boogie.

He didn't buck, but she said that was because she was ready for him. After she took him cantering around, correcting him about 5 more times, she and I met up. Lily was pretty barn sour, so I was just coming up to the barn and turning, going up the hill, trying to stay out of the way.

She showed me what she was doing. Basically he was keeping Cibolo's head, not riding on a loose rein at all. That way she was stopping trouble before it got rolling.

I trotted around on Lily and we committed to another ride today.

This morning I got to the barn and finished my rounds, with only one incident. Shanti.

Shanti is only 20 and she has cushings. I took these pictures of her ears the other day. She was the BO/trainer's primary mount and had been going downhill so she retired her. This morning she didn't come up to eat, I hiked down and urged her up from the lower pasture. 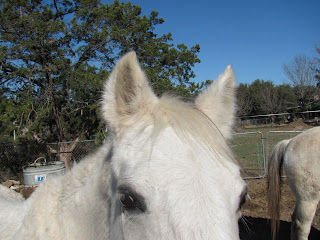 She seems to have dropped a good deal of weight, and the BO is going to reassess her feed. She was trying to keep her from getting overweight, but something is going wrong. She's going to take Shiloh (who I mentioned is dropping in herd status) on Monday to the vet and may load Shanti as well. Both may have teeth issues (Shiloh is getting a tooth pulled).

I saddled both horses, put my saddle on Cibolo and BO's saddle on Lily. She said she was going to see how he was doing and put me on him, maybe.

I was fine with that. I'm actually not scared of Cibolo, believe it or not. I'm scared to canter, scared of keeping him contained in a trot.

We did the same thing, although this time, Lily was completely cured of her barn sourness. She was fired up and wanted to run around (mental note - round pen this girl for a few weeks). We trotted while BO put Cibolo through the exercises. Then we met up.

"He did much better," she said. "He just started to pull his head to the side and I got on him and that was it."

Then, a large floodlight went off in my head.

I know that move. He does it. I didn't realize he was testing me at that moment. And every friggin' time I let him get away with it. This isn't a big huge head toss. It's this check to the side. Not tiny, but about a two feet move to the side.

And in that moment, I said, basically "Whatever."

He does it in the round pen too. And I just let it go. Now I know. I know his precursor.

And then we went on a ride through the neighborhood ... and I cantered. On Lily first, in an area that felt safe. I cried, I laughed. Lily is crazy fast. She was on fire and ready to run. The BO cantered next to me and we left her in the dust, big time. I can't collect Lily's canter, so it's very "rushy" and I actually dread it more than Cibolo's. But I sucked it up and rode faster and faster.

Then, after another half hour of moseying around, we switched horses, and, nearly back at the barn, the BO pushed me.

"Let's canter up the hill."

:)
Typed in a hurry by Unknown
Email ThisBlogThis!Share to TwitterShare to FacebookShare to Pinterest

YAY! What a wonderful story!!

That head thing is an ask - he was asking, and when you said nothing, he took that as a yes - and there you go - it's that subtle sometimes - it doesn't mean that he's bad for asking or you're bad for not saying no, it just means that communications need to be clarified. Great example of this kind of thing. Good for you!

I love it when those light bulbs come on like that. Good for you for picking up on it.

Great post. Great realization that something simple was possibly the trigger/breaking point. Glad you had a good smile and canter!

Terrific! I am glad your ride ended on a positive note.

You go girl. I have to say I'm not surprised. Just had a feeling you may just work this crap out. Cause all horses try to get your number. YOUR HOME PHONE NUMBER! :)
When we go on our trail ride this year we ARE cantering correct?
I'm SO happy for you and you know I know how all of this feels, so hooray! Big girl britches-check!
~Mindy

Oh yeah! Sometimes it takes having another person ride, or watch you ride, your horse to figure out what's going on. Glad you got it figured, and hope that you stick with it and just have fun!

I love it. So often the answer is right there. We just need help seeing it. I'm going to remember this for when I have a problem to solve.

Good for you! You are very brave! And your BO is very nice to waork with you and Cibolo and to push you a little past your fears, too.

Just be careful you are never pushed too far past your comfort levels, either. Listen to your instincts.

So, was his head motion asking you if he was allowed to buck?? What did the BO say about that? And why did he buck FIVE times?

Be safe out there,
~Lisa

Lisa, I think what Kate and the trainer was saying was the ask is the "are you in charge" kind of question. When I said nothing, he presumed he was in charge. She said he's a testy horse. He'll test. Once you make it clear, he'll be fine.

Because during that ride at the lake I was riding with a too loose rein, i.e., not tight enough to catch that head bob, I missed the chance to head off the next series of decisions he made.

Leah: Sometimes it's amazing what we miss in the dark.

Pony Girl: Can you believe it? CANTER!

Wolfie: I would have felt pretty good just having cantered on Lily, but this was definitely over the top.

Mindy: He had my number to the point I was thinking of getting an unlisted one! I want to haul over to your area. Let's pick a date.

Shirley: I was surprised how much I learned. I always figured "sure the trainer will ride and do fine, how does that help" but it does!

Susan: It's so hard to see from the saddle sometimes. This really broke it down for me.

Lisa: You know, he still may not be the right horse. But I HAVE to figure this out, because I AM doing something wrong. So the more experience I have, the better...

We are having a group trail ride at Bandera park on 6 Feb. with our club, so far it looks like there will be 7 riders and we would love to have you. Equine Hill Country Friends is a horsey club by invitation from a member, I am inviting you to join. No dues. Just check out the site and mission statement to see if you are interested...we have lots of planned rides coming up and a camping trip too. If you'd rather go with just Linda and I, possibly Lorri, that's cool too. I just know I have the 6th of Feb blocked for a ride. It get's hard to go off on Sat. when you are a single mom, so I do alot of riding during the week. Ever available on a Wed?
Send me your email, I can't find it!
~Mindy

That was a great post. You found an answer to one of the problems.

Yes, horses are always asking us things in subtle ways. Somehow a rider learns to keep his sixth sense tuned to his horse. You begin to feel the horse's response just before it happens.