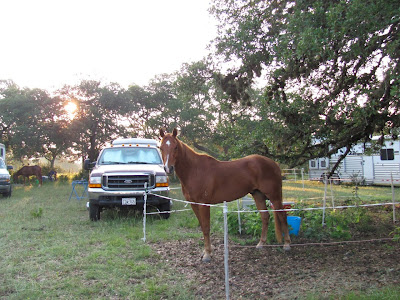 You signed us up for WHAT?
Tacked up with my brand new saddle, two little water bottles and 5,431 butterflies in my stomach, we headed down to the trail head. I painted a bright green "130" and tried to glean what that number meant. Surely there weren't 30 riders. 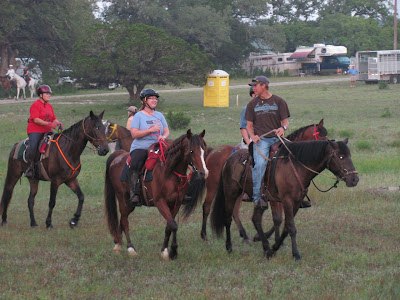 The start of the 25 milers

Too late to back out now. I mean, my horse had a number on his butt.

I got to the check in and gave my name and number. Ann and Carol were there on their "babies" - a grey arab for Ann who's name was River and a sorrel Arab named King for Carol. Both were barely 4 and River was fresh from the trainer. This is why they were in the intro ride, where green horses or green riders got to head out and give it a try.

Now that I saw the crowd, I was not so thrilled. There is no way I would have agreed to this ride had I known there would be 38 horses. Cibolo did fairly well standing there and I began to think it was a manageable situation until the OTTB started bucking. Then Cibolo was whirling and very... concerned. I got him back under control, but the butterflies I had brought with me had morphed into bats.

I worried we were headed back to South Texas and our ride in Conception. We'd made lots of progress, and I knew so much more. But this was the same situation all over again.

For miles, Cibolo jigged and snorted. I tried turning him, but there were too many horses and frankly, turning just seemed to increase his anxiety. I tried to relax him, stop him, but he fought me. The "babies" were a bit agitated and that fed his nervousness too. At one point I wanted to get off and do some ground work or something, but Ann and Carol both said - just a little further. You can handle it. He'll settle down.

I was getting frustrated and longed for the quiet mounts I saw passing us by. Maybe I was out matched here. Maybe it was too much.

I started muttering his nickname for moments like this. French Fry.

Then Carol said, after being exasperated at some bad trail behavior around us, "Let's trot."

I didn't really want to trot because I thought it would get Cibolo's blood really going. Speed was always the enemy with bad behavior, at least that's what I had learned.

But something happened in that trot. With every foot fall, his anxiety melted. He needed to go faster than a walk, needed the release. It was something he couldn't get from the turns or bends. For Cibolo, he needs a chance to clear his head, and it happens when he hits the ground at a trot. When we slowed down, he was still hot, but nothing like before.

I was stunned. This is the piece I was missing. This is what my friend had done at the trail ride at Conception that I couldn't do - he'd let him canter and "run it out" of his system.

We could do this.

At about the second mile we discovered something else. River kicks.

Luckily my stirrup took the blow: 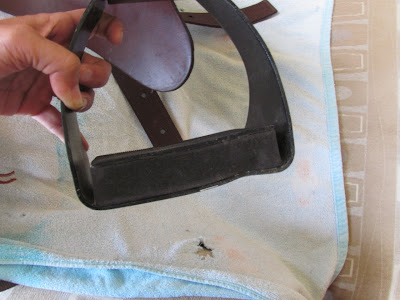 See the bend there? 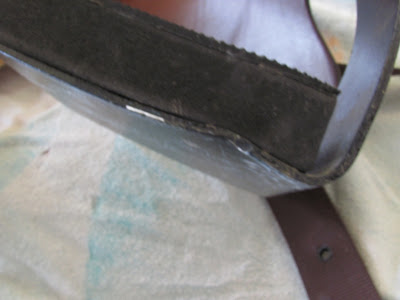 Here it is, a little closer.
I guess my guardian horse angel was watching me on that one, because River gave no warning. The clang on the stirrup was loud and based on this damage I'd say I would have had a broken foot - or worse, Cibolo would have really been hurt.


I think at this point it's time to hand over the story to Cibolo who has his own perspective on the ride:

We got totally lost this weekend.

You know I was kind of suspicious when we got to this place where Amigo goes and there were those stingy rope things up. I had my own little stingy rope pen which wasn't so bad since I got all the hay that was tossed in. And there was extra alfalfa, which I LOVE.

I got the low down from a few horses there - the grass was good, no mares were in heat, there was a stallion here and there, and even a few other of us highly muscled types. Mostly it was the skinny horses though with all the mane hair.

Anyway, me and mom headed over to the trail and there were some real schizoids there. I tried to stay away from most of the worst of them, since I know that's a sure way to get tossed in a ditch.

We hung out with two skinny horses, youngsters really. One of them kicked my nice new saddle. I should have bit him, but I've got more class than that. Then there were a bunch more horses, and the herd just kept moving around, there were so many of them IN MY WAY. It was creeping me out. Finally, after trying to explain to mom that I needed some space or something, I got to shake a little off and me and mom trotted. It felt great. And she finally stopped with the "easy" business. We got to trot a lot and it was fun.

Pretty soon we got to a place with some water and mom got off and squirted something NASTY in my mouth.

That was electrolytes, Cibolo. One of the women brought an extra one to share.

Yeah. Like I was saying. Nasty. Then mom kept going on and on about the water. I knew it was water, I was standing in it. She even splashed some on my mouth which I DID NOT LIKE.

I got to eat grass even though I had my bridle on which is usually NOT ALLOWED PERIOD. So that was good.

We kept going and I figured we'd be coming up to the trailer any minute. I mean we had gone five miles (according to my highly accurate mental odometer). We never go this far except for our trips at the lake.

But there was more water and she was back to trying to get me to do something with it. Then I realized it. We were lost. Totally lost. I took a tiny sip of water and considered my options.

Then we were off again. We found a pond and I decided it was a good place to drink and I was thirsty. The mud felt great on my legs. Mom was worried I'd lose my cool boots, but they stayed on, no problem.

Again I got to have some grass, which was good. We trotted and cantered a lot, but we were still lost. Sometimes Mom got out of balance, I think her left hind was bothering her. She kept messing with my stirrup there. But she did okay, considering.

There were some spots where the skinny horses got nervous, but I told them everything was just fine. One of them, the gray, did not like cactus. Every time he'd dance away like it was going to get him. I laughed and laughed. Then there was this wolf...


It was a dead branch

I don't think so. Anyway, I totally intimidated it with my fancy foot work and it played dead.

Fortunately, thanks to my knack for these things, we got back to camp and we had gone 15 MILES. Also the vet was there to make sure I was okay. I said of course I was, and proved it with a really low heart rate - better even than the skinny horses.


Everyone was very impressed.

I have a calm nature. That helps.

Then I went back and Amigo was there. He looked real tired, so I figured I'd tell him how I had to get mom home from God knows where later. I had lots and lots of hay, and lots of water.

Hopefully we don't get lost next time. 15 miles is a long long way from the barn.

It was a beautiful ride, through incredible country, and Cibolo was a champ. He can definitely do this kind of ride even though he's not a "skinny horse." And he pulsed down better than anyone and ended up in top condition.

I learned I can ride him through his emotional moments, that they really aren't that bad. That I've been fearing more than what he's been actually dishing out - afraid of where it could go, not where it is. That's a new and powerful realization for me.

There is a tiny bit more to tell, but I'll save it for another time. This is definitely long enough.
Typed in a hurry by Unknown
Email ThisBlogThis!Share to TwitterShare to FacebookShare to Pinterest
Labels: endurance riding, From the horse's mouth, trail riding

Good for you and Cibolo. It sounds like a lot of fun.

Sometimes a horse just needs to move - that's wonderful that things ended up so well for you - that must be a huge confidence booster!

Way to go! I have always wanted to do an endurance ride, but I keep putting it off.

Isn't it a great feeling to know you survived it? Each time you and your horse take it up a notch, you each learn what you really can do. I had another horse kick out at us while I was riding as a child. I thought the horse missed, but it turned out he took a chunk out of my horse's hip.

WOW. Congratulations on not giving into the butterflies and bats! You both pushed your comfort levels and what a ride it was. Yay!!!!

Hahaha, I love it! You accidentally signed up and rode!

Glad you didn't get hurt. I got kicked once by a stealth kicker, and it sucks. I agree about just letting them trot it out; it helps so much. It took me a while to come to an understanding with Dixie about trot means trot, not gallop wildly away, but now I can let her trot to relax.

See how 15 miles is easy and fun? 25 isn't that much more. You don't have to have a skinny crazy Arab to do 25. Fifteen miles is a gateway distance. ;)

--Aarene & Fiddle
(we ain't neither one of us skinny)

What a huge AHA! moment for you. Yay!
Sounds like you do a lot of what I'm starting to finally learn not to do, too. I think it stems back to your experiences with Canyon, just like mine with Baby Doll. Always preparing for the worst, because you just knew it was coming. Our previous horses were good about that....they rarely ever dissapointed us in that expectation.

Isn't it so wonderful to ride a horse that isn't trying to kill you all the time...and to have that understanding and communcation breakthrough that helps your relationship bond grow stronger?

Yay for you! Yay for Cibolo!

Good for you for pushing your own boundaries, and for getting past the butterflies and bats before they became dragons. Dragons make you get off and walk.