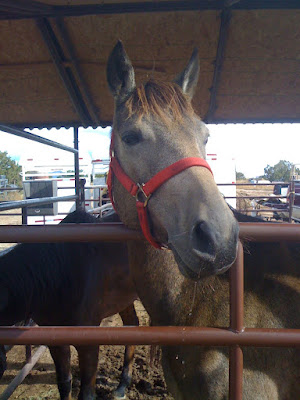 We arrived on Friday morning bright and early. I'd been up for hours, unable to sleep in because of the excitement. Smokey apparently felt the same.

It was surprisingly cold, and I was grateful for the layers I had on. Unfortunately I had underestimated the power of the wind and I was one freezing Texan in New Mexico by the time things were getting started. I pulled out some blankets and snuggled in, ready for the clinic to start. My rides were scheduled for the afternoon so I could settle in a bit and see how Mark worked. 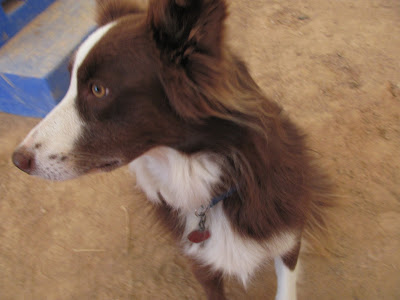 Rain, Mark's unbelievably cute, intensely trained dog.
We riders had elected to change formats from the one on one hourly format to the "group" format.

The "group" format - or what I'd call the double one on one - is the only format they do in Europe now. And I can see why. Having done both, this is far superior.

The one on one hour format is just that - you work with Mark for an hour, then leave the arena. In this double one on one you work with Mark on whatever it is you want to work on for anywhere from 30 minutes to an hour. Then you ride off to the back of the arena to practice. In the back of the arena Crissie is there watching you ride and giving you feed back, or helping you get unstuck. You know how it is, you're there with the instructor and everything seems very clear, then when you're on your own it slips through your grasp? This fixes that part completely.

Then, after you've practiced and everyone has had their round with Mark, you come back up to check in, work on something different or fine tune what progress you made. Due to this format I won't have much to report on the riders I rode with because I was too busy working. I'll just cover a few highlights, posting on a few other riders throughout. For this post I'll talk about this team. 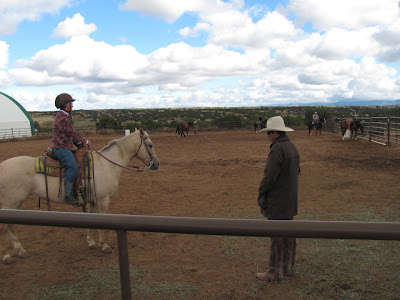 First up in the morning was this woman and her palomino. They had ridden together for a year but things that had started well were starting to go not so well. At first they checked saddle fit. That was a problem so they got a new saddle on the horse - no more pinching shoulders (I had an empathetic flashback on that one).

Still the palomino mare was still not feeling well. She was sensitive to the touch at her jawbone. She mouthed the bit constantly. They switched bits, and it was marginally better. They managed to do some work on "softening." But by the next day it was clear. This mare had severe TMJ - caused by power floating.

Mark said they are seeing more of this kind of problem. A previously easy going horse will become resistant as a result of TMJ. The changes take place slowly, over months, eventually getting to the point where this mare was. The new method of power floating - using power tools - can result in the tools heating up to the point that they actually melt the enamel. In some cases the back teeth become smooth as glass, making it very difficult to grind. The increase in effort required causes the TMJ and often results in trouble throughout the body of the horse.

Mark noted that he was going to be going to "dental school" next year with Spencer LeFlure, a dentist who has taken the entire concept of equine dentistry to a different level. You can learn a whole lot more at this link. He even fixed Pat Parelli's horse, apparently (it's on the website).

If you have time, watch this video (skip the first 2 minutes, it's just a long intro).


I would like to note that during this entire clinic Mark never says "you need to buy this bit" or use "this dentist." He's not a marketer of anything. He's willing to tell you what works for him and what he's seen in other horses. But there's no sell in this guy.


Over the next few days the woman and her palomino worked on ground manners - her mare was walking right into her - and ground tieing. While they didn't quite get to do what she had hoped, they did find out that what was going on wasn't likely to be an issue of training. It was pain.

----------
The temperatures kept dropping like prices at a garage sale after lunch. A wonderful woman, Jenny, who had been on a clinic auditing tour for 10 days (boy, can I get that kind of job?) offered me a down coat - which I borrowed for the next two days. I was toasty warm and able to focus.

Smokey had never been in an indoor area. And most of my challenges with Smokey have been in just a regular arena, where his stops, his turns, and his steering all seem to come apart.

Donna encouraged me to to ground work first and I laughed. No kidding were we going to do ground work! I was planning on spending a good bit of time on the ground, walking him around the arena where the canvas and metal creaked and flopped. One end was a little sandier, there were a were odd things all over, but the sounds and lack of horizon were what seemed to be the most upsetting.

We worked for a while. I even got a little rear on the ground and had to ease the pressure back (which had been pretty low, but apparently not low enough). I encouraged someone else to go first (I was "technically" first, although there was no real order), giving Smokey a chance to get used to all the noises, the crowd reactions, and to accept this environment.

I got in the saddle and we rode around in at a walk and at a trot. I tried to remember some of the things Mark had talked about in the morning - keeping reins tighter, riding with intention. When it was time to ride up for my turn I wondered where in the world we'd start. Smokey just wasn't the horse he was on the trail, and I didn't understand what was going on.

I introduced Smokey - who was by far the youngest horse at the clinic - and explained what was going on.

I demonstrated. It was non-existent. After a few turn stops we halted. "He's never like this on the trail."

"That's because the trail is doing the leading, not you."

I didn't understand this, but frankly had my hands full of squirrely horse and didn't get to explore that idea. Mark immediately told me not to flex Smokey, which is what we'd been doing when he got like this. "While you're here, you will never, ever flex his neck."

Okay. As it turned out the flexing had been what had unhinged his steering completely. But more on that on the second half of this post. At this point we'd just work on our stop.

So for the next 45 minutes or so we worked on stopping with intention and clarity. (Thanks to Trail Rider for the photo below). Sure, we're stopped there, but probably it took us 30 minutes to get to that. Plus Mark was using some sort of force field (I'm only partially kidding). 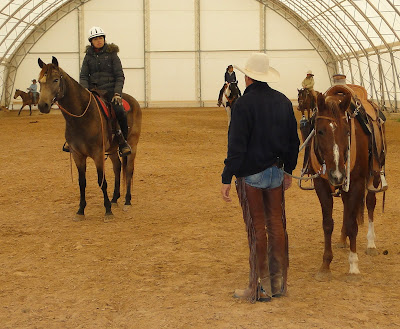 Slowly, slowly we tried different approaches. We tried just plain stopping but whenever we faced the audience we just sidepassed into the wall. So we worked on stopping using a turn. That worked better to get the idea across.

Have you ever shot a gun? Mark asked me. Yes, I replied. (Actually I was a marksman in college)

"That's what I want you to do. Focus as if you were shooting a gun. See the target and stop facing it."

Then it started to come together. Our stops got crisper. Then Mark had me ease up on the cue completely. "Just stop," he said.

I cleared my head. I felt my focus get sharp, my intention simple and clear.

We're stopping I said in my mind.

I heard the intake of breathe from those watching. It took all I had not to cry with joy at this feeling of connection.

I headed to the back of the arena, marveling at what I'd just experienced.
Typed in a hurry by Unknown
Email ThisBlogThis!Share to TwitterShare to FacebookShare to Pinterest
Labels: clinic report, indoor arena, mark rashid, stopping

Sounds like an incredible experience. I must remember to try to ficus like that!
Your horse is beautiful.

It's awesome when it clicks isn't it.

Wow! That is soooo cool what you are learning with your beautiful horse! I would so love to go to one of Mark's clinics, if only to just watch. It would be so grand to be able to take Gilly there; maybe someday. I can't wait to hear more about your experience at the clinic.

Did you hear me gasp with the rest of the audience when you and Smokey stopped? Well done!

I love hearing about aha moments in clinics! I always learn from other people's experiences.

It was a good experience to watch the two of you learn and come more into a harmony.

Mark said several times that he keeps things simple. I find that I often try to make things complicated.

Sounds like a great clinic. And very exciting that you experienced such progress so fast.

Good stuff! Wish I'd been there to see it, but your descriptions are marvelous too - can't wait to read more.

What a thrill to conquer and control such a big issue on the first day. Yay!
When you talk about Mark telling you to stop facing the target....what are you supposed to face instead?

Breathe, How fascinating to hear about the clinic, and what you learned about using "intent" to stop Smokey. It's amazing to learn things like that with Smokey, isn't it? Thanks for writing about your experience. I love reading it!

Thanks for bringing up the power float info. It's definitely something that people need to be aware of.

Can't wait to hear how the rest of the clinic went.

It's so good reading about your success at the clinic. Soon you will be "one" with your horse all the time.