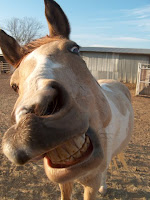 So there we were, just moments away from being ripped into shreds.

I can't tell you how often this happens. How many times I have narrowly escaped the predators that linger in shadows, waiting for me to simply drop my guard. It's a wonder we aren't down to just two horses around here, given the danger to us all.

Particularly since I'm the only one that keeps a real eye out for trouble. And believe you me, trouble is everywhere.

We were there on the safe side of the silver thing. On the other side was a skinned cow, clearly recently killed by the savages that awaited on the other side. I could see them moving about, trying to stay hidden - but I saw their feet.

Now a lesser horse, a horse with a inferior sensory system, that kind of horse might think that it was just a cat. Or a little person back there, just moving around.

But consider the facts. The skinned cow was clearly dead. Something killed it. And given the movement just underneath the cow's skin it was clear. The killer, the savage was still there.

My alpha mare kept making her noises she makes at times like this, and while I avoided getting in her "space" (she is a bit adamant about such things), I did manage to pull us both to a safer distance.

Then, proving once again that she had NO IDEA THE DANGER WE WERE IN, she had me move around in circles.

In my opinion it is always a mistake to present a tasty hindquarter to savages unless you plan on kicking the living heck out of them. But she just kept making those noises.

After a few turns I noticed that one of the little people who wander around here and who I carry on my back on occassion, was walking from the silver thing to the vet rack. I wasn't too concerned for her safety - every horse knows savages will go for the Pinto-Arabians first. Little people are way down the menu. Probably too stringy.

We kept dancing around and around and finally, when I looked back over, it looked like the savages had left. My alpha mare walked over to the skinned cow and encouraged me to sniff it. It didn't really smell much like a cow. I mean there was a little cow smell, but mostly it smelled like that stuff they spray on us at the wash rack. I gave it a lick to make sure it was well groomed and took one last look around.

It worked. We had scared off the savages. Once again the other horses were saved by my quick action which clearly had made the difference. See, savages rely completely on the element of surprise and once I'd found them out, they had no choice but to give up their dinner plans.

I try not to make a big deal out of these accomplishments. It's all in a day's work, really. But I do wish my alpha mare wouldn't make that other noise - the one that sounds like a whinny.

Surely that's not how she laughs. After all, there's nothing funny about a near death experience.
Typed in a hurry by Unknown
Email ThisBlogThis!Share to TwitterShare to FacebookShare to Pinterest
Labels: From the horse's mouth, horse humor, spook

Too cute woman! Linda and I are tentatively in for the March ride. Just need instructions and such. Also, are there more trails to be had for those of us who may wish to pursue more later in the day? You can email me at pinkcurlytail@yahoo.com
Slainte!
--Mindy

Canyon you are priceless. I bet you make your Alpha mare laugh like a hyenna (ooops, sorry). In that picture you look like YOU are laughing....at me??

canyon has his moments, I tell you!