Canyon and the cow hide (part one)

Canyon has once again requested to tell his side of what is now known as the "cow hide incident." What follows is in his own words. 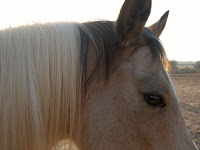 Do you suppose someday they will develop a more hoof friendly keyboard? While I don't mind dictating, I fear that something is lost in the translation.

Ah well. I suppose we had to give up something when we horses opted for the ability to crack walnuts with our hooves.

But I digress. The latest attack took place when the family finally came out to visit. I have to admit I was sort of wondering if they were gone for good and I had mixed emotions about it. I mean it's nice to have all this pasture time, but it does get a little boring. Plus there are no cookies.

So when my alpha mare came out to get me, I was pleasantly surprised. Cookies were on the menu! I guess that's why I let my guard down. Always a mistake to anticipate your snack when the ugly reality is that danger lurks behind every fence.

I waited politely as always while she secured my harness and we headed to the gate.

I haven't been out of the gate in a while since my nice run leads right into my pasture. Recently a few new silver things had been added to the area outside the gate. There were three of those big silver things they used to put the hay hills in.

I miss those hay hills. You could just put your head in there and chew, chew, chew. Heaven! Once I spent four days straight with my head in there - it was a new record in the pasture.

I know, pretty impressive. Everyone else would take off after a few hours and walk around, or stand in the shade for a while. They just couldn't sustain it, frankly. It takes real commitment and no small amount of stamina to stand in one spot and eat for four days straight.

Fortunately I can eat like that all day and it has no effect on my weight whatsoever. Does affect my saddle, though. That girth shrinks right up. Weird.


Anyway, they'd taken all the silver things out of all the pastures and have gone to just tossing hay around in little piles. Now we have to WALK to get to the hay. Darn inconvenient if you ask me. Rumor is that some horses where pulling hay out and ... soiling it!

Proof once again there are some horses you just can't civilize.

So there were the silver things outside the gate, waiting to be loaded and taken away to some other lucky horse's house. I was sad, but not too worried.

Then, I saw them. Right behind one of the silver things. Wolves. Or lions. I just got a quick glimpse, and, as usual, my alpha mare was clueless.

It was up to me to warn her and save the other horses. But would I be in time?

(to be continued)
Typed in a hurry by Unknown
Email ThisBlogThis!Share to TwitterShare to FacebookShare to Pinterest
Labels: crazy geldings, From the horse's mouth, horse humor


lol!
There really is a black wolf at the end of those silver things, though. Really.