Clinic - part 8 of a whole bunch 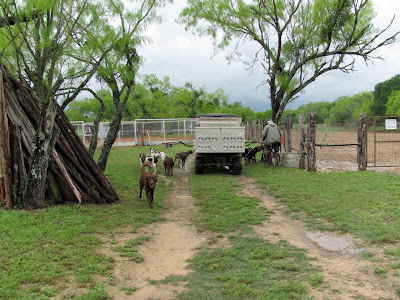 This is a contraption for walking a dozen dogs at once. It was hysterical.

I'm going to try to wrap up the third day in this final post, because at some point things get pretty repetitive. But you do learn something every day from every horse. We'll start with my day in the saddle.

We put a saddle on Cibolo with the shim pads. It was okay, but the saddle did slide way back. I think Kathleen felt Cibolo was doing well enough and the shimming was good enough for us to get in an hour.

Have I mentioned Cibolo is not crazy about mud? He hates it. But it was, of course, raining, and the round pen was a sopping mess. The minute I put my foot in the stirrup, the rain came down.

First we walked around. Kathleen helped me with two things - my hands and my hips. Contrary to what I'd been told, she suggested that instead of "feathering the reins" when he nosed out (basically pulling on one side and then the other), to just keep the pressure steady, much like the instructions for gaited horse from the day before. In four turns around the round pen the nosing out had largely stopped.

"He's gotten relief from pressure by nosing out before," she said. "So it makes sense he'll keep trying it. You have to build up a different experience."

My riding was pretty lousy at the trot. The stirrups were too low, I was completely paranoid about coming down on Cibolo's back and whether or not this saddle was even in the right spot anymore, he was not thrilled with the mud, and it all added up to a mess. Still she was able to tell me to work more on my trot, specifically on keeping my hands neutral. Independent of my seat. Part of his nosing out was an attempt to keep me balanced in the seat. Frankly, I was riding so badly, that it's amazing he could trot at all.

And she reminded me to breathe (ironic, I know).

Now I had plenty to work on. And I was looking forward to getting home.

When Lou came back in with Skoal, she said she finally decided what she wanted to work on. She wanted to get some techniques for doing some of the training from the saddle since they have so little time to work with the horses because of the demands of the dogs.

Now, I'm not skilled or experienced enough to understand exactly what she was asking. It sounded to me like she was asking how to get a better handle on these horses without having to put in the time on the ground. I could be wrong.

But Kathleen seemed to have gotten the same gist. She insisted you had to take the time, had to focus on these horses and give them what they needed to learn - and that meant real training, not catch as you can training.

She said "Often times trainers will get a horse just good enough to get by, but they never really fix anything. They just get it good enough. And then, before you know it you're on the ground because finally good enough wasn't good enough."

There are no short cuts - at least no effective ones.

We're so rushed these days that we rarely take the time to do a job well. We just get by.

She showed Lou a few things to do in the saddle, things like turns on the forehand and the like, but the message was clear. Give the horse the training it needs if you expect it to do the job.

Arch came in riding John's horse. He's skilled enough to read the horse but, at the same time, to keep his emotions as calm as still waters. He pushed the Gray hard, but without the tension, the Gray didn't quite get as agitated. I asked about the level of pressure, and Kathleen only said that Arch is skilled enough to handle it if the horse were to melt down. Another approach would be to take more time.

There was still quite a bit of dust and confusion, but slowly, slowly, the horse got it. You could see him piece it together, it wasn't a light bulb moment, it was a peeling of an onion. And then, there it was. A side pass to the gate.

Then the other side. Same process.

I never did see John do it on board, but one thing for sure. The Gray got it.

Diego, the spotted saddle horse that was greener than expected, went home as did his owner. I'd hoped she'd ride another horse there, but I think the emotions of the entire situation were too overwhelming. She decided to keep him, and continue her work with him on the ground.

There were a few other things I observed that weren't really tied to any particular horse. But through the entire experience there was only one thing that I found I didn't agree with Kathleen about.

She was describing the atmosphere in the barns that she goes to, in particular the "natural horsemanship" barns. She'll see women, in particular, be very careful and quiet around horses, trying to not spook, and then try to comfort them.

First of all, trying to protect them from things that scare them is crippling that horse. "You're not doing that horse any favors," she said.

I completely agree. Not helping my daughter face her fear of bugs is an example. My mom would rather stomp everything and protect my daughter from bugs to the point of isolation. I would rather teach her what is reasonable to be afraid of and what isn't.

(Except scorpions. I have a thing about scorpions. You can read about a rather hilarious scorpion encounter here.)

Then she talked about the "poor baby" syndrome, of women trying to comfort their recently spooked horses.

"Horses do not comfort one another."

It was something I observed vividly with Lily, calling out to Cibolo and sending him a very direct and strong connection. He grazed after he touched noses with her.

That was comforting. Calm, supportive energy, active concern. Maybe I was just lucky to witness this moment, maybe I have a magical mare, maybe it doesn't happen all the time. (I wrote about this here, in case you missed the scary colic episode) But there's no question in my mind what I saw was an attempt to comfort another.


All in all, this clinic was an incredible experience. I'm on the lookout for other clinics I might be able to audit. I've ordered a book by Mark Rashid to start to pour over until October.

I have so much work to do I wish I could add hours to every day to do it. But I know there are no short cuts and fewer excuses to do what's right for the horse.

And I'm glad to be learning.
Typed in a hurry by Unknown
Email ThisBlogThis!Share to TwitterShare to FacebookShare to Pinterest
Labels: clinic report

Sounds like you had a great experience and learned a lot. I've got a lot to do with Maisie, too - she's moving to her new barn on Friday - and I know what you mean about there being no shortcuts. Can't wait to hear more about your work as it progresses.

Horses develop hard mouths and other resistances from riders hanging onto their mouths to keep their balance and stay on. An exercise that really helps with balance and keeping hands and legs independent is to pick up a trot, then post and when you come up, stay up for two strides before coming down. Keep a loose rein and don't hang onto your horse's mouth. It's difficult to maintain at first, but once you get your feet underneath you, it gets easier. People think I'm crazy when I suggest a posting exercise to improve their horse's mouths, but it works.

I'm happy for you and your experience! I also enjoyed being reminded of Lily comforting and reaching out to Cibolo. That was absolutely remarkable.

I'm glad you got to ride, even if it was miserable. Perhaps some private lessons would be good for you; it's always helpful to have someone else watch you ride, they see things you don't even know you are doing.

I have an extra, brand new copy of the Mark Rashid/Kathleen Lindley book "A Life With Horses - Spirit of the Work" - I would love to send it to you. If you email me your address, I'll stick it in the mail. My email is the7msn at gmail dot com.