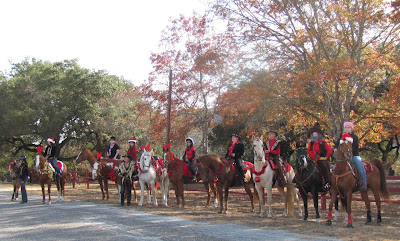 The Line Up (that's us, on the far left.)
Ever since I re-discovered horses I had one goal. I wanted to be riding my horse in a parade. I’ve been in a couple of parades over time. I was Cinderella for our Library’s float in the San Antonio Battle of Flowers parade (which is the 2nd coolest parade in the world). Given that I am a Hispanic woman with a size 9 shoe, it was a bit of a stretch, but the wig and pink ballgown helped me carry it off.

When we moved out to the Lake I discovered that the greatest parade ever was the holiday parade in our town. It was pretty modest in those days, maybe 20 entries, but I envisioned myself riding in there with the County Posse, my horse decked out in ribbons, me with the perfect parade wave to the crowd.

Then I had the horse I’d as soon ride through a mine field than take to a parade. I contented myself with the fact that my children were living out the dream by riding in various floats themselves. 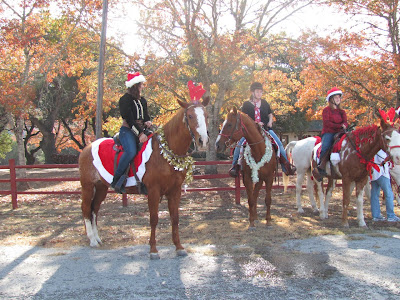 When we got Lily I thought, you know, that horse could ride in a parade, no problem. I began to have a glimmer of hope. I got to be in the parade last year as a pooper scooper, which was DARN CLOSE to actually riding a horse in the parade.

Which is a long way of saying I really, really, really wanted to ride my horse in this year’s Christmas parade. And this year we did. Sierra and I went to the dress rehearsal to make sure none of the horses would over react to bells, ribbons, antlers and hats. We practiced our line up. I knew precisely what problem we’d have. We’d have the problem we had in South Texas.

My horse doesn’t like to stop in a crowd of horses. 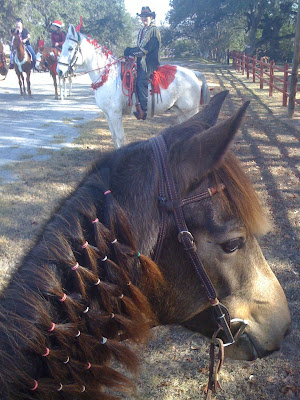 Hello. Smokey here. I wouldn’t have to keep going if we weren’t clearly LOSING.

Horses are in front of me. That’s a race. And I can take ‘em if you let me.

You really don’t want to be behind the power truck. It makes noises and has crinkly stuff you don’t like.

Yesh. What would you know? Besides if you’re not lead horse, the view never changes.

You stole that from the mush dog blog, didn’t you?

The morning of the parade we went to the barn very early. That’s when I knew it. My horse was not in a good space. You know, when you feel your horse is not connected with you? Where you should really just work on simple stuff because anything more complex is going to be a mess? You know, complex things like being in a PARADE?

I did a fancy mane job as he was eating, realizing that the very action of grooming while he was eating was not good. Maybe this is silly, but I think when I groom a horse while they are eating they get… irritated. Do you feel that? It’s like only low man grooms while upper classman eats. I get the feeling that it erodes the sense of leadership. Maybe I’m wrong…

Sure enough I got my other signal. Smokey hesitated to load but we got him in relatively quickly (The next day he loaded perfectly). We traveled over to the staging site, parked and did a little more practice in the field. Smokey decided the antlers were itchy, so we passed on them since he succeeded in flinging them off his head and into the field. If he did that in the parade we’d probably bean a toddler or something.

We headed to our spot in the line up. We were #19. Here’s where it got really fun. There were 60 entries. We got to ride past #60 through #5 to get to our designated staging for the parade area in the line up. So it was a mini desensitization clinic complete with screaming children, decorated golf carts whizzing by, flapping decorations, a giant snow man, and really loud Christmas music.

For a crabby horse who was NOT IN THE MOOD FOR THIS, Smokey did amazingly well. Stopping wasn’t really an option (which is why we are working on stopping….)


We should have galloped through that stuff. It was crazy.

It wasn’t that bad.

Ha! How about the crinkly stuff that kept moving like upside down grass?

So, anyway, we practiced the move we’d do in the parade. Turn around to burn off some energy. Stop for .5 seconds.

We stopped for AGES.

Riiight. Finally we cleared the gauntlet and hung out, waiting for the parade to start. We stood still but periodically decided to walk around for a while.

I was totally fine with that, I’d like the record to show…

True. You did great. After that, we headed out. We did well, all things considered, and I suspect most people thought I was just doing some fancy footwork. At one point Smokey slipped on the asphalt and finally seemed to get the value of slowing down.

I hated that slipping thing. Why you insist on riding on such surfaces is beyond me.

But all in all, I was very proud of him.

I had the best mane, too.

You sure did.
Typed in a hurry by Unknown
Email ThisBlogThis!Share to TwitterShare to FacebookShare to Pinterest
Labels: From the horse's mouth, parade

Smokey and you sure are going places!! I'm happy for ya. His mane WAS the prettiest in the parade too.

I have similar conversations with my horse, but he is a little more insulting to me...

I love that you converse with your horse; Jesse and I chat all the time (mostly due to MY nerves). We have a 4th of July parade, similar to yours - mostly firetrucks, ours and all neighboring counties that aren't currently fighting a forest fire. Jesse totally 'gets' the "what are we waiting for?" thing, and you can put stuff IN my mane, but don't you even DARE braid it ("It's gorgeous the way it is-flying all over the place"). She does like her antlers at Christmas, though, 'cause they play music and the other horses don't like that. HaH! She also likes to dance to the band music. We are OK as long as something is blaring. Go figure. Glad you got to finally ride in a parade. Merry Christmas,
Juanita

I'm in awe of you and Smokey and yes, it was a totally amazing mane job. I've always wondered how people prepare to ride in a parade and how confident they are feeling when they ride their first parade. I don't think I'll ever be that brave.

Congrats! You guys are winners! Wish Pie and I had been there with you - I don't know that Pie would have done as well as your guy did.

Oh yay! I am so happy for you. My first parade was two years ago, and it was also a lifelong dream for me. :) Next year, may I recommend stencils and canned fake snow? I totally hear you on the race brain, too.

I'm proud of both of you. You're just getting out there and doing it.

haha at least you were on the same page at the end! And he really did have a fancy mane!

And yes, I feel like mine get irritated when I mess with them when they're eating, too. That's not to say that I don't do it every once in awhile just because I can, but for the most part, I try to let them munch in peace.

Just thinking about all the things that could go wrong riding a horse in a parade would keep me firmly planted in the corral. Bravo to you and Smokey for taking up the challenge. And I love how you braided his mane.

Love that mane! Yes, parades, especially evening type parades with flashy lights and all.. man, it's a lot for a horse. I'm glad you made it safely and bravely and hey, you're ready for next year now!

How fun, how fun, how fun! My goal is to walk Bernard in the annual South Valley parade next year. I'd also LOVE to ride Ellsworth in a parade and drive Bernard (in a few years). Who knows what wonderful things Fergus and Nigel will surprise us with?!

So happy that you did this and had fun. Smokey's mane looked awesome!

Smokey had the bestest and prettiest mane of all.
I used to LOVE parades! I wanted to be a professional parade rider when I grew up. Hmmm... I guess that boat has sailed..
Yea you for following your dream and doing an excellnet job to boot!

Breathe, Since being in a parade was such a special dream of yours, I'm glad you did it and Smokey did great! Congrats to both of you! Your confidence with him is growing by leaps and bounds - it's great to read about!

That's awesome that you got to do something that you have always wanted to do. And for Smokey being a young guy, sounds like he did pretty good.

I'm with you and Leah, I don't think horses like to be bothered when eating their meal. Just think what it would feel like to have someone brushing your hair and messing with you the whole time you were eating...LOL. I try to leave my horses alone when they are eating. It's different if I just give them something to snack on, then I'll go ahead and give them a thorough grooming, but real meal-times...it's hands off.

I ride in our local parade every year. It was a big step for me. I truly thought the horses would FREAK. We went as a family the first time & rode with some others from our riding group, so I think our horses were comfortable because they were with their own. But the last couple of years I have done it solo, with just some folks from the local riding club. I am always real proud of my mare when it is over. I am sure they are on stimulation overload, but just move along like its a walk in the park! :)