First let me explain why there are no pictures of the grey horse I went to see.

When I got out of the truck, I couldn't believe the horse that was being led to me was the horse I had talked to the woman/girl about on the phone.

This looked like a rescue horse. Ribs showing. Long toes. Dark scratches all over his legs. One third of his mane gone.

I was so taken aback I couldn't bring myself to take a single picture.

This was the woman who told me she was absolutely firm on the price. He made the Roan look like Black Beauty's irish cousin.

And it got worse.

She pulls out a wire tie down. "I know some people think these are cruel, but he can pull his head up quick and hit you."

When she showed me his work in the arena it looked like a giraffe was running the barrels. I've never seen a horse with his head so high. He stumbled, of course, given those terribly long hooves, the worst barefoot job I've seen on a horse supposedly recently trimmed.

Then I did my usual quiet bit, where I let people dig their own holes and she dug deep. He was high headed, charging on trails, just wanted to run in an arena, no back up, tough to stand still.

I got on him for about 30 seconds and decided this horse had no brakes, and with his head up in the air, not going to get brakes any time soon. I let him go back to his truck, got off and said "I'm used to something with more training."

Did I mention his hoof was growing crooked?

I felt for him, he was just a sad sack out there, a saddle on his back that had no fleece, in a bleak place.

But I don't run a rescue for horses (if we ever do, it'll probably be for dogs), and am done with challenging training issues.

Someday, we'll have property. Someday we'll make room for a horse who needs to retire. Someday we can have a horse that is just a companion.

But not today and not soon. 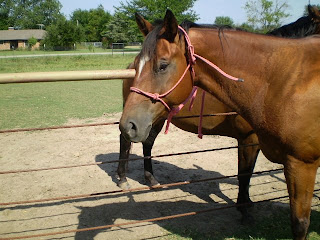 So, back to that bay.

Here's what I got from this trainer (recommended by a friend in Dallas):

This is a 7 year old registered QH gelding with very good breeding. Lots of trail experience. Purchased by a father for him and his daughter to enjoy. Father lost his job and took another one that's very time consuming so no time to spend with the horse. 15 hands. Very friendly disposition....stable owner says he just wants to be with you. Adds that he is very pretty and small show quality (she shows). $2,500 firm seems to be a good price. Quiet, gentle, kind. I like his pedigree and conformation....he's too fat but you can see he has a good top line and strong hindquarters, looks like pretty good legs, nice eye; neck is set on low and his shoulder/pastern angles appear a bit more straight than the other bay gelding so you'd have to ride him to see which one was smoother gaited. 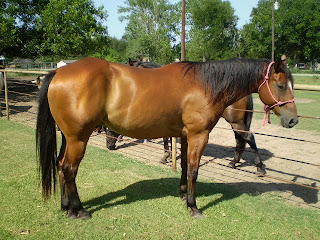 When we talked she said he has "colonel freckles" which I've heard before, but had to google to find out anything. He was a champion cutting horse who died from eating blister beetles... Lily has Doc Bar, another aqha hall of famer.


As a mutt myself, I'm a little concerned that my horses would have more notoriety in their breeding than me.

Anyway, after a rather disappointing start to my horse shopping, I'm putting down a hold on the bay and getting a vet check. I'll be up in Denison on Friday to see him. I'm putting a lot of confidence in the trainer, and in what is by far the most attractive prospect I've seen by email. I decide that I'm done shopping until I see this one in 3-d. (The dun had a bad hoof in the picture when I looked more closely, don't know if you could see it...)

Then I'm in the grocery store, content with my horse decision, when my phone rings.

No, not that Ringo.

This Ringo.
Ringo is an arab.
And a bay, sort of (what do you call them when they have some white?) 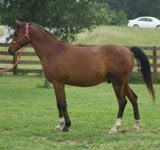 I know, I know. I already sold my favorite arab saddle too.

Great trail and 4H horse. Ringo is my 10 yo daughter's "fun" horse. He's very cute, smart, energetic, confident and gentle. He does not hesitate at water or other challenges. Mallory has been riding Ringo since she was 8yo and has had a blast on him! She is now moving into APHA Western Pleasure and needs to find a good home for Ringo.Ringo was separated from his papers in a divorce prior to our purchasing him, so his foaling year (1995) is unknown and estimated below.

Ringo has been a lesson horse, kid horse and family trail. He is, as they all are, practically perfect in every way.


I'm still leaning toward the qh, mostly because I'm leery of another arab, the qh looks great and is being referred by a reputable trainer.


Next post: Lost confidence...
Typed in a hurry by Unknown
Email ThisBlogThis!Share to TwitterShare to FacebookShare to Pinterest
Labels: horse shopping

He is a nice looking boy. Good luck.

QH for the win!

Sheesh, I go off camping and I come back to you horse shopping. Congratulations on everything working out so well for you. :)

Well you know that I am never one to keep my opinions to myself...lol!!! I think that the QH looks like a sure bet if you want a Steady Eddy-and he is handsome to boot!

Me personally? I would check out that Arab, because I like a little wind beneath my wings, and get bored when I am not challenged at all.

In the end, it is your decision and your needs that have to be met, and those may be completely different than mine. I say follow your heart...it hasn't let you down yet.

Anon - that's you TR, right? I knew you'd vote for the QH even though you ride that crazy paso.

Melanie - Thanks, glad you're back! It's been crazy around here! I think I need a little steady Eddie time. lost some fire in the last few months and I'd like a little less wind - or hurricane - under me. :)

I vote for Arab (but I'm a sucker for them). I have a bay and she has white socks on her back leg and a white star/stripe/snip on her face. I was talking to the vet. He said that that was much better for tracking purposes. Solid bays have nothing to help id them. I'm not saying that that's a reason to by the arab, just giving info. Good luck with the tryout.

That arab...wow! So cute...and sounds perfect. And yes that little sweetie sure can ride well.

That QH is quite the looker, too. And seems sturdy and strong...and quiet.
I'm enjoying your horse shopping trips and that you're willing to share them with us, too.
Poor old gray horse, though. What a shame he's had such a rough life and no real chance at any positive changes.

I can't wait to read what happens next in your horse shopping!

That's really sad about the grey horse. Sounds like there is no where to go but down for that one. Thank goodness they shut down the slaughter plant in Texas!

I'm not a big fan of Arabs, mostly because they tend to be small and I'm not (5'11"). I like that QH a LOT! Can't see a thing wrong with him in the photos and I love me a good bay horse!

Well hello!
So sad about the grey!
They both sound like nice prospects..and bay.my facorite color.
I Love the looks of Ringo! So...never having owned a QH but loving Arabs...you know my thoughts are leaning ....!
Kacy w Wa/mare
Have fun!