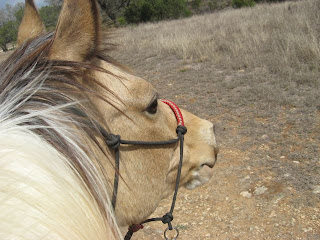 I remember telling someone that I'd never buy a horse from a trader, because at least with a person you had a chance.

When you listed "Prince" you noted on your ad that he was okay for a novice. And we were novices, this would be our first horse.

Novice. This was a horse that hospitalized you on numerous occasions.

A horse you wouldn't ride, couldn't ride, when you brought him out. That struck me as odd, but I trusted you because you knew I was looking for a horse for my daughter.

You wouldn't sell a dangerous horse for a ten year old. What woman would?

When I called you within our 30 day trail you LIED to me over and over. He was spooking because of me, you said. He bucked because I was in his mouth.

You lied and lied and when I took him to a clinic I learned just how badly you lied to me when I met trainers that knew you and knew this horse.

You'd sell a horse that you knew would buck, because he had bucked the last time you had ridden him in that trainer's arena to try to sell him. And he threw you off. He didn't sell there.

This was a horse that threw you and broke your hip.

A horse that couldn't be ridden on a trail, which was what we told you was the only thing we wanted to do, because he would spook at everything.

A horse you had for seven years, and you knew inside and out.

My daughter fell off him when he blew sideways, spooking at a pole. He's bucked with me so much that riding with me is just a plain old drag as I ask folks to take it slow around us.

When, on a big trail ride, a young green horse went on a bucking fit, "Prince" did the same - and NO OTHER HORSE (there were 30 there) DID - I started to get the idea that this horse was not broke.

So I worked with him, have most of the spook out of him after a year and a half. Now he'll spook in place, wait for me to walk him up to the offending object and give it a sniff. But try as I might, I can't get past the random buck in the saddle. After all the work we've done, the buck remains, although most everything else is solved. 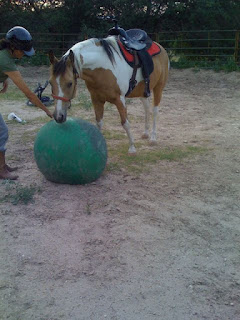 I've come to realize that riding a bucking horse when I go out with my daughter is selfish. If I were to fall, then my daughter, who is just gaining her confidence with horses again, she would be in a predicament that is not fair to either one of us. Particularly since we already have someone with a level of disability in our home. We can't afford another.

My husband and friends have said to move on ages ago, but by nature I'm no quitter. I get attached, to boot. But I have to admit, this is beyond my ability.

I'm out of my depth with Prince, aka Canyon, and you knew it. I have to list him for sale because I truly can't get him past this issue. While I haven't been hurt, the angels can't hold me in the saddle forever. And increasingly I'm dreading going out for a ride.

Which isn't the point of owning a horse.

I know I'm no trainer. I've worked as hard as I can, but after talking to my trainer I'm taking her advice...

Canyon, as much as it breaks my heart, is for sale.

Because, as they say, a green horse and a green rider (which I consider myself - and him) is a bad combo. 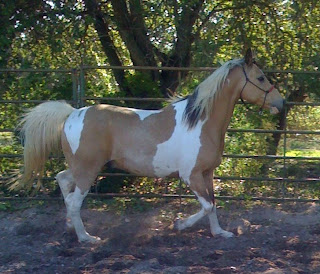 I'm trying to be responsible. I'll keep working him. When he sells, the next person will be experienced, will know that he bucks on occasion, will know the limits I've reached. He'll probably go cheap, a lot cheaper than you sold him to me. That's okay, though.

Because I'm not you. Greed will never force me to compromise the safety of someone, especially their child (I've already turned two people away who wanted him for their child). I'd give him away to a trainer (not an amateur like me) before I'd sell him for a family horse.

And another thing. You bought a green horse on purpose, girl. I didn't.

I bought a green horse because of one woman's greed.


I decided to repost this. I had taken it off because the woman did end up buying Canyon back - on her own, I didn't call her (I had called her about 3 months in and offered to sell him back to her, but she declined then).

But I realized that this letter is very accurate and maybe even a good warning to horse buyers. FYI, Canyon was evaluated by a trainer and a vet. They had detected nothing wrong.

Typed in a hurry by Unknown
Email ThisBlogThis!Share to TwitterShare to FacebookShare to Pinterest
Labels: horse for sale.

Good for you for not selling him to a child rider. I'd hate to see a kid get hurt on him. But isn't it amazing that despite your honest description, despite a 6/10 temperament rating, that people are still interested in him for their kids? I'm assuming this is just because of his color. There's something to be learned there...

Wow! I had no idea it was that bad with Canyon! I'm sorry you are selling, but it sounds like you have done as much as you can. It is an agonizing decision. I almost sold Jackson at one point. Green rider and green horse here too. I'll talk to Linda and see what weekend will work the best. Probably the 20th, as I work the Sat. before that. I assume you will be bringing Lilly? :O)
~mindy

Mindy - Oh, it'll be the two of us and Lily and Sierra (or Adam, we'll see), unless there's a miracle and Canyon has found a great home by then.

I believe that when we die, we do have to review our lives and see how our actions affected others. It's always good when people are forced to see it while still living, because if they are anything short of a sociopath, they might actually learn from it and not repeat the same mistake. Good for you for trying to make it work, but this is about your and your daughter's safety.

THIS is an awesome letter. Really! You lay it all out on the line, honestly, yet responsibly, heartfelt. It makes me angry for you...and for me, because truly this letter could be written by me for the selfish trader who saddled me, also a novice rider, with a horse way too much for me to handle. She has never bucked on me, but the sourness, spookiness, stubborness and headstrong attitude is too much for any novice to handle.
A horse has to at least be willing to take it's rider out.
And the trader/trainer of mine knew......SHE KNEW that I wanted a fun trail horse.
And my mare...well she tolerates trail riding, but she doesn't love it.

Anyway, you've inspired me to finally speak up with the trader/trainer and supposed friend to let her know what I'm going through.
And I just want you to know I'm proud of you. A horse is not a dog, and noone should make you feel bad because Canyon is not the right fit for your family.
Like you said, you've got your safety...and your daughters safety to keep in mind. They say with horses, it's not a matter of IF it's a matter of WHEN, but with a horse as unpredictable, such as Canyon, and my mare Baby Doll, the stakes are much higher...and the chances of a serious and even fatal injury are probably a given certainty.

And I know all about that, my friend.

Oh, and would you mind if I use your letter, with changes added for my mare, to give to my horse trainer/trader, too?

I couldn't write it better if I tried.

I haven't sent this to Leslie, and don't know if I will. I mean, she KNOWS all this already.

I don't know what the point would be.

What do you think?

I truly understand the dread of selling a horse. The guilt of "admitting that you can't handle it." I've been there. It's a blow to your pride and heart, because you have also fallen in love with that ornery donkey. Mine also loved to bite. He tossed me to the ground once and ran full blast at a barbed wire fence with me on him. But, again, I agree with you, our family's well-being is more important than our pride or a horse's welfare. You're doing the right thing. I traded the donkey-butt horse for a less green mare who has taught me tremendously, and challenged me, but not too much.
BTW, How's the other horse working for your family?

This spring I also gave up a 'project' horse. Not because I wasn't experienced enough to work with him but because I decided after looking death in the eye due to cancer, I didn't need to continue facing that everytime I got on that horse.

We donated him to a rescue program with full disclosure. He has been in an intensive work program and is doing very well I hear, nearly ready for an adopter. This is something you might consider for Canyon too if you don't find the right buyer. At least you get the tax deduction and he gets a good and safe opportunity at having the right forever home.

I think you should send this letter to FUGLY Horse of the Day and ask that it be posted (without the names if you wish) as a warning to both buyers and sellers. It's very well written and a good statement of caution to new horse buyers.

I bought my horse knowing he was a mess and considered it to be a rescue since the next stop for him would have been a kill sale. I'm just no longer willing to put that kind of time into not having fun with a horse!

Give yourself a huge hug for going so far with it and then let it go. Life is just too short. Carmon

wow, so here is the whole story! i have been wondering what happened to canyon.

what a great way for this to work out, but what an odd gift from the husband, but i always give the benefit of the doubt, perhaps the lady is a much more experienced rider and ready to fix bucking.

best wishes to you,