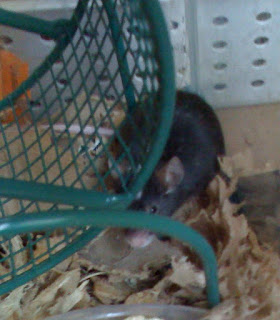 Here in our tiny corner we’ve had some tough losses among our pets. But there was one which has gone unmentioned -- Shadow.

Shadow was the last surviving mouse of our mouse ranching experience (which you can read about here and here). She had survived several cat encounters which had taken out other members of the herd and the mass thinning out we did in the Summer in order to stop impacting greenhouse gases.

If you’ve ever cleaned out a mouse cage, then you know what I’m talking about.

Shadow was an amazing mouse architect, tearing into cardboard tubes with a creativity that seemed well beyond her rodent brethren. There were times I was tempted to save one of her creations just because she’d done so much work on it. But she was a mouse that preferred working with a blank slate, pushing aside her creations when they were done.

Sadly, a mouse life span is pretty brief, comparatively speaking. Shadow developed a tumor this fall and I knew that some days she was miserable.

Mireya watched her huddled in the cage and we talked about what she was going through. And she made the very grown up decision to let Shadow scurry across the rainbow bridge with Cricket, our lizard, and Pepper, an earlier mouse.

So I made an appointment with the vet.

“The vet? Are you kidding me?” my husband said when I told him. “Surely we can do this ourselves. It’s just a mouse, for crissake.”

We went over to the cage. We looked in at Shadow, who was carefully rearranging her shredded paper towel and torn cardboard tube. We looked at each other.

“So when’s the appointment?” he asked me.

“Good,” he said and took off for sites unknown.

It amazes me how these things are a mom’s job.

The funeral was a quiet affair, and Shadow was laid to rest wrapped in her favorite medium, a paper towel. Mireya said a few words about how fast Shadow was in her rolling ball and how she really liked grapes.

Our rodent life is down to a single hamster, although there are intense negotiations for a ferret. A FERRET.

Typed in a hurry by Unknown
Email ThisBlogThis!Share to TwitterShare to FacebookShare to Pinterest
Labels: OT

Even the smallest pet can be a loss - mice are very cute and smart, but they sure do smell bad (at least to me)!

A ferret??? Hope you don't mind having your house (and life) deconstructed if you get one of those!

You never cease to amaze me! I'm sorry. That story had me cracking up. Of course I'm sorry about poor little Shadow, especially for the girls, but really, I wish I had your writing flair! And, ferrets stink! I may very have two guinea pigs for the taking (both very sweet AND FAT) because Miles has gone derelict in his caretaking duties. He wants them; he wants ME to care for them. He currently has put them on a diet. Don't even ask.
The warning is out. If you don't do better in the New Year with your pigs, Craig's List is gonna make someone VERY happy! LOL!
I hope Shadow's exit with the vet was very uneventful... I have heard chinchillas make GREAT pets... We also have a turtle named Turbo. He's nice and quiet....

you got me laughing so hard i cried - when your husband said that.

i love the little micies too!

I once had to take my son's gerbil to the vet because it was in some sort of catatonic state. Turns out she was in a diabetic coma. She recovered, but I gently and firmly made it clear that should this happen again, she would be allowed to cross the bridge. What we do for our kids.

I had 7 ferrets & 1 just died. boo hoo. Yes they are a handful, but I started with 1 ferret and started rescuing and got more. They are are so much fun and worth all the trouble IMO.

Read/research online before you decide ~ that's what I did. They live a lot longer than your sweet little mouse. Four of mine are 5 years old. As they age, they can experience health problems. OH and I have the flu right now & can not hang out with my fur babies ~ they can get sick too.

RIP Shadow!!
have you thought about a Chincilla??

I think a chinchilla might be fun, but I think I'm ready to downsize the pet population.

But I saw a cute video with a chinchilla in a dust bath and I was almost ready to go there...

I'm such a sucker.

I have had a ferret, but the smell... Whew. Even without musk glands, it's pretty hard to take!

Oh she was too sweet, that little shadow mouse~ and you are so hilarious they way you told us about it all!
I am glad that she had you on her side and bless your mans heart for conceding.

OH..the Chinese comment!!! They sure had alot to say that we know nothing about...still!
KK
P.S.
The riding technique I am using that opened up my pelvis and allowed my leg to stay put is:
Drop your stirrups-
sit tall and yet, act as if you are posting in slow motion...it takes your butt out of the saddle and rolls you onto the pommel. As you do this...very slowly, you will feel the weight in your heals.
(if someone stands by your legs with their hand on the bottom of your foot- you really feel it)

That is the movement for posting..nothing more. It is a slight rocking movement the horse does for you practically. and it lengthens you leg!

Ferrets stink....even if they've been descented. I've had a few friends over the years with ferrets and I'm always surprised by how strong their scent evades an entire house, while the home owners just get used to and it lose the ability to smell it.

Oh, and their poo stinks worse than cat poo. bah!

Nope, no ferrets on my list of pets. lol!

Sorry about the loss of your cute shadow.
I think if it had been me, I'd have just put a mousetrap in their with some cheese and let the trap do the job quickly.

Sorry for the loss of little Shadow. I too, am a lover of rodents. As for Ferrets, do your homework and shop wisely. They are a great joy as long as you know what you are diving into. There nicknames are carpet sharks, if you get one, you will learn why. And if you can stand it, they are GREAT fun if you have more that one! Good luck and keep us posted!