(Due to my crowded hard drive, our galloping colt video is delayed. But here is something fun all the same)

It’s that time of year. It’s the time that we parents in the Texas Hill Country do what no other parents in their right mind would do with their children. 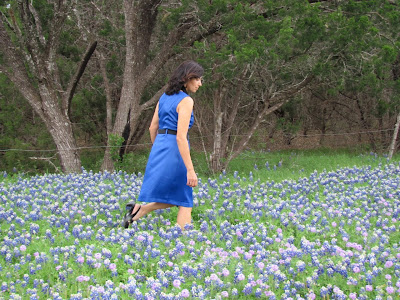 We pull over to the side of busy highways, drag out our children from back seats who are dressed just for the occasion, and traipse them through deep weeds so we can get our coveted Texas BlueBonnet Picture while semi trucks blow by at 60 miles per hour.

Why? Because we’re sentimental around here, that’s why.

It’s been a rough two years for bluebonnet fans. The few bluebonnets that poked up during the drought in the wild were straggly loners, not suitable for photo time. Those that did manage to spring out of the parched ground for a day quickly collapsed when 14 families huddled around them for a picture.

I’ve tried many times to seed my yard with bluebonnets so I could avoid the roar of the 18 wheeler as we sit in a “field” also known as the Highway Department’s “right of way.” But those flowers must require exhaust fumes and asphalt within 20 feet to grow.

This year we headed out to our traditional spot along Hwy 306 (based on the number of trampled bluebonnets, this location is no big secret) for our big photo shoot. The flowers are stunning. Having saved up their blooms for so long, they have burst forth on the scene like second graders pouring outside for recess. 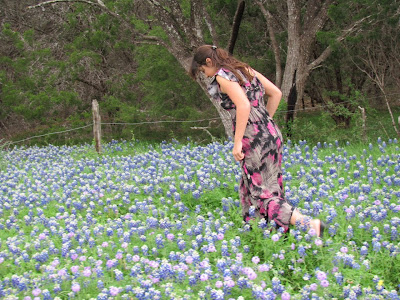 Unfortunately, it’s been at least three years since we’ve taken our pictures in the flowers and during that time there’s been a development.

Mireya is not thrilled with bugs.

Okay, a mild understatement. A tiny grass bug flew into her room the other night and we nearly had to call in the National Guard.

Needless to say, with wildflowers, there are bugs. I chose not to mention this in advance. Timing would be everything, I reasoned. 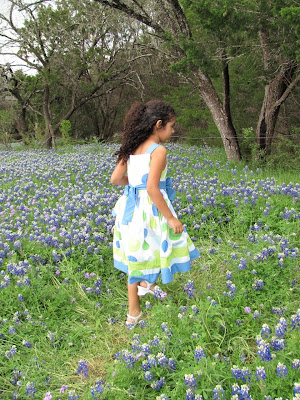 After hustling the kids into position, I managed to snap off a few pictures before Mireya high tailed it to Daddy and the shoulder of the road. Frantic brushing off of the dress followed.

The pictures are filled with that “get me out of here, there are BUGS” look on her face and a very strained smile. Not exactly the look I was going for, but one thing for sure.

(PS We are at C-1 - although I'm hauling later TODAY, so technically we're at C Day! *happy dance*)

Typed in a hurry by Unknown
Email ThisBlogThis!Share to TwitterShare to FacebookShare to Pinterest
Labels: OT kids, ot memories

What a great post. Those flowers are incredible and your story was told so well!

Those are such gorgeous flowers. Are you gonna share the results of your photo session? You all look very nicely dressed.

Here in the Swamplands we have a similar tradition with tulips which, obviously, aren't wildflowers, but are cultivated in brilliant fields of knee-deep mud.

Local tulip growers finally got smart about tourists trampling their fields, and now they market the opportunity to tramp through mud...as well as the opportunity to buy cut flowers (ours are otherwise grown for seed)and heaps of touristy kitsch. It's done wonders for the farming economy. Locals still tramp out in pretty dresses + mud boots to have photos taken.

I just love bluebonnets!!!! Those are some beautiful photos! i am Sorry it has been a hard year for you just like it seems to be for us. We all have to be strong!

I'm cracking up because this is SO TRUE! Every Texan with kids dresses them up and turns them loose in the bluebonnets!

Bluebonnets are Texas through and through. I love seeing vast fields of them spread out as far as the eye can see.

Your girls looked lovely in their dresses.

Hey why didn't you take us dogs you know my color is blue!!!
~Dyno
Hey Dyno is wrong this was a family thing. We do that kinda thing to. We escape and go have fun around the blocks. Oh we do it every year when ya'll are gone.
PS You know Blue is actually MY color
~Bella
Hi Roxie here saying Love the pics and it's true we do escape every year. Dyno always goes straight for the Cat Food Lady's Place. He takes off to her deck faster that he chases the ball!!!
~Roxie
PS But really blue is MY color!!!