Clinic - part 1 of a whole bunch

(UPDATE on Colic: Cibolo appears to be fine. He's eating, but no grain. Hopefully he's done with that nonsense (whew).) 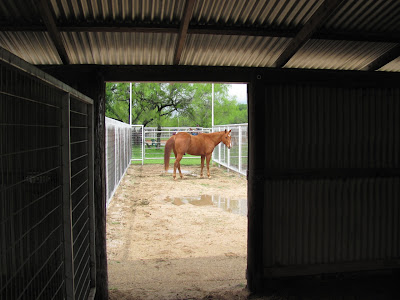 It started with the rain.

I drove though driving, pouring rain to drop off Cibolo on Wednesday. I’d never hauled in such lousy conditions, and was glad I’d left with plenty of daylight. DH was dropping off my saddle in Pipe Creek (where I’d be spending at least two nights, thanks to Linda’s gracious offer, which was thanks to Mindy), but first, I needed to get Cibolo to his “room.”

The facilities for the clinic were really beautiful. The place is a dog kennel and training facility for German Short Haired Pointers. There they raise these AKC champion dogs for field trials. I don’t know much about field trials – well, actually I knew nothing before I came to the clinic – but there is one thing for sure. Field trials are all about the dogs. Keeping an eye on the dog, watching for the dog to point, watching for … whatever it is that can happen when German Short Haired Pointers are pointing to quail.

So there we were, in this beautiful place, lush green fields in Hondo, the rain pouring down and – here’s the exception to the really beautiful part - there was no covered arena or round pen. And since I come from the “hey, it’s raining, let’s watch a movie” approach to horseback riding, I was not particularly suited to sitting in the rain, let alone riding in the rain.

But I wouldn’t ride the first day. Because as it turned out, Cibolo was completely saddle sore. Apparently all this time the saddle I’ve had on him (which I was told fit him fine) has fit him so badly it made him very sore. When I saw him jump at Kathleen’s touch, I felt sick to my stomach. This is why he was avoiding me. This is what was going on. He was in pain and he just couldn’t take it anymore. And he was trying to tell me. He was avoiding me in the field and the only other time he’d done that was when his shoe had torn off and he was in pain.

All I’d do was sit in the rain and watch others work with their horses. Yes, there was certainly value in learning what the root of his problem was - pain. And while there’s a great deal to learn from watching, it wasn’t what I’d paid for, wasn’t what I’d hoped for, and on one level, wasn’t what I needed.

I needed to know what I needed to work on, what wasn’t going well. I needed someone to look at what I was doing and say “You need more of this and less of that.” I needed guidance on my technique, which, at the end of the day we are all blind to.

And it looked like I wasn’t going to get it.

So, as the rain poured down on my saddle sore horse, we switched to the barn for an hour long saddle fitting session with Cibolo as the model. I learned a good deal (and later I’d find out that actually the best saddle for him is a gaited saddle which I hope to order sometime soon).

As they day wore on and with my disappointment and horror at the pain I’d caused my horse was evident, Arch, a wonderful older rancher and accomplished horseman, took me aside.

“I think I can help him feel better,” he said.

He smiled. “I can try to give him a chiropactic adjustment.”

My spirits lifted. “That would be fantastic!” I’ve been having a terrible time finding a chiropractor. Would Cibolo feel better?

We went out to the barn and Arch started to work. First he adjusted his wither. Cibolo dropped his head with relief. Then he used the back of my hoof pick (the round part that is opposite of the pick part) and pushed down in a straight line from the top of his butt to his tail. This made Cibolo arch his back like a cat and I heard a series of pops. He relaxed even more and I saw some of the brightness come back into his eyes. Then he took Cibolo’s head and “adjusted his axis.” There was a pop as Cibolo pulled away and his face looked relaxed. He still had muscle soreness, but it was clear – he felt much, much better.

But I had no idea if I’d get to work with him at all the next day. If he was in too bad of a shape, there would be little we could do. And all my planning, money, time away from work and kids, it would all have been … well, not for nothing, but since I didn’t plan on auditing the class, it would have been a considerable waste.

Tomorrow: a few of the other horses on that first day.

So glad to hear that Cibolo is doing well! Whew!

Saddle fit is so important. I have two saddles, and one of them was custom built for a mare I had. It absolutely does not fit Beamer. I use a reining saddle on him that flares out at the shoulders, but sits too low on his back at the rear of the saddle. So it's not perfect for him either. I'm glad you found the problem ; there is a process of elimination I use when problems arise. First, I check the horse physically, then I check the tack, and I review what I may have been doing unintentionally to cause whatever the problem may be. Just a quick word on saddles- you said that the best saddle for your horse is a gaited saddle; can you elaborate on that a little and say why? Because this is a gaited horse place you are at, there may be a little sales pressure there for their type of tack.