Thanks to everyone for making me feel so much better about my big splurge. I can *almost* breathe normally. But for now we take a break from our horse obsession for a visit with one of our favorite mythical creatures.... 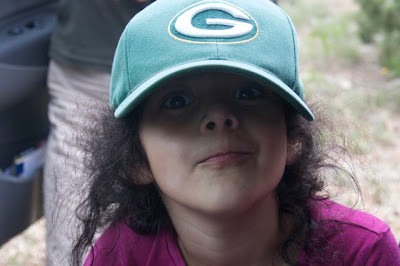 The Tooth Fairy has proven to have real staying power at our house. Doubts have clouded the status of Santa, and the Easter Bunny, but the Tooth Fairy remains completely real.

Which is why I was in a total panic on Sunday. I texted my sister in Chicago: Help! I need an intervention!

Why? Because somehow I got roped into promising my daughter she could CALL THE TOOTH FAIRY.

Like most things around here, it started very innocently. The second of Mireya’s front teeth finally came out on Saturday and she began the grand preparation for the visitation of the Tooth Fairy. We ran our usual slate of errands and I never realized what machinations were going on in that curly head.

About 10 pm on Saturday I strolled into her room. I reached under the pillow for the tooth, the note and cash ready. That’s when I found it. A note to the tooth fairy:

Dear tooth fariey,
I hope you like my tooth.
If you don’t have that much money, just give me a very small stuffed anmal.
Love Mireya.
PS Does my mom really call you and why didn’t you pick up my tooth last time?

First of all I was sort of impressed that she thought the economy could have impacted the tooth fairy.

But secondly, I was reminded that this kid doesn’t forget ANYTHING. The tooth fairy had been late one time and at the time I explained that I’d forgotten to call her. And now, here I was, having to make excuses for the TOOTH FAIRY.

Cute Tooth.
Sorry I was late that time, there were high winds.
And yes, your mom calls me.

The next morning, Mireya was thrilled to find her note. She wrote a thank you letter and wanted to talk to the Tooth Fairy personally.

“You can’t talk to her,” I protested. “You’re not even supposed to know I have her number! It was a secret!”

“Then why did she tell me you called her?” asked Mireya, a.k.a. Perry Mason.

I sighed. “You know, to be honest, she’s not exactly the smartest fairy in the forest.”

I called my sister and explained my predicament.

“Can’t you just wait until she forgets?” she asked.

“This is Mireya. She still hasn’t forgotten the green eggs incident from April Fools day, 2006.”

Fortunately a Texas Tooth Fairy was found, and after school on Monday Mireya talked to her. Imminently satisfied, she hung up and smiled a gap tooth grin.

Big sis Sierra pulled me aside “Who is that on the phone?”

All I could do was smile.

Cute cute CUTE!!! The first tooth my kids ever lost, the "tooth fairy" got overexcited and forked out twenty bucks! Next time, the tooth fairy came to her senses and toned it down to $5. LOL. xxoo

That reminds me of the time (and you can you this idea if needed) of the time when I guess my mom was soooo tired that I received a note the following AM (with the money of course) telling me how she--the Tooth Fairy---has broken a wing and couldn't make it up the stairs! What seemed altogether very suspicious to my 5 or 6 year old mind was how the note was IN MY MOM'S HANDWRITING! Of course, being a smart girl who valued the money she got for each tooth, it was duly noted, but brushed aside!
If you use this, disguise the handwriting! Yes, you splurged on the saddle. But did you have a choice if you wanted to ride your horse and KNOW he wasn't hurting? NOT! Are you selling the old/new one we opened the night you arrived? If so, I hope you make a profit or break even, and then perhaps you can leave the guilt FAR behind! May 8? Are you free to ride at Bandera? It's a Sat. That would be mucho cool. I want us to have more than a 2 hour meeting!!!
~Mindy

That's a wonderful story AND a smart little girl! ;)

What a great story. As parents, we sure can dig ourselves deep can't we? Great solution though. My daughter didn't start getting her teeth until she was almost a year and-a-half so of course by the time she started losing them, she knew all about Santa and the Tooth Fairy not existing. I think she got gypped a bit. She's 14 now and losing teeth that kids much younger lost and she's probably the only kid in high school with a gappy smile.

Love it. Lucky you to have a daughter with a mind like a steel trap. ;) Her note and the tooth fairy's reply are priceless. I hope you keep them. When I moved out of my parents' house, my dad gave me a ginormous box full of those "little things" that he had collected over the years. I can't tell you how much that meant to me.

Kids are so smart. Glad you were able to reach the tooth fairy. With all the sugary snacks available these days, she probably super busy.

Oh, the calisthenics we do for our kids.

OH, now this made my day! Ya just have to love what comes out of the mouths of kids......but then mothers really need to watch what they say. LOL

This is just great! Made me giggle. Mireya is such a bright and clever gal. I hope you save this story along with the notes, too. These will be a treasured keepsake for her one day.

My 13 yr old twins know that Santa is just from the heart and the Easter bunny is just plain funny, but they still like to believe in the tooth fairy, if only because they like to be surprised with money.
The tooth fairy doesn't keep their teeth anymore and just leaves them behind along with their monetary gift. But we've explained that way by saying that tooth fairies only need the baby teeth so they can pass them on to the babies.

My daughter, with autism, doesn't care for the money gifts and expects the tooth fairy to bring her a treat like candy (nice for the dentist, eh?), so I wish the tooth fairy would remember to keep some candy stocked up in a private place that she can't even get to because she often has to run out last minute to buy candy or tell daughter that she had too many stops and wasn't able to get to our house until the next night. lol!

HAH now I know and I am going to tell Sierra right away. Mwa ha ha ha...
~Dyno the mischievous dog.
Hey I know what it's like to be a mom. Dyno and Roxie are like my own children. And I know how it gets sometimes. But hey you gotta love 'em.
~Bella
Hey mom's mom Roxie here I know that is a really funny story.Hey you should be a writer. LOL.
~Roxie