Clinic - part 2 of a whole bunch 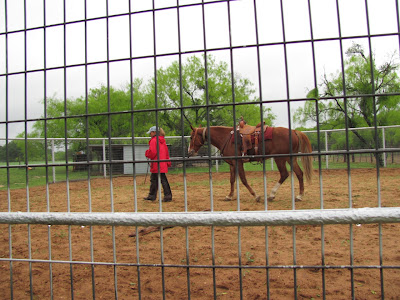 I felt terrible. For weeks I’d "checked" Cibolo’s back, but now I realized I hadn't been doing it correctly. The vet checked him just a few days earlier – nothing. And while I was disappointed not to ride, I was more worried about what else I was doing wrong that I was unaware of – that could be harming my horse.

There is so much conflicting information you get with horses. Some people tell you that this bit is gentle, others say it’s harsh. Some say barefoot is the way to go, others swear by shoes. Some insist on blanketing, some clipping, some nothing.

Cibolo’s saddle soreness had taught me a harsh lesson. While I was disappointed, my horse was INJURED by ME. Unintentional, yes, but that hardly mattered. I needed training, yes, but if he wasn't feeling better, he needed plenty of time off.

Ignorance is very bad for your horse. I decided on the long dark drive to Linda's home at Pipe Creek that night: I’d learn what I could by watching during the morning, then I’d go home early, letting him heal and rest at home.

As it turned out, that was not to be.

The other horses on that first day: the “Toyotas”

Three of the horses at the clinic that first day had the same challenge. We called them “Toyota” because their accelerators were stuck. (You know your brand has trouble when you are now used as a nickname for chargey horses.)

All the horses were gaited and used in the field trials and were simply beautiful. I have few pictures of anything because the rain was a constant threat, so you’ll have to take my word for it.

For the first horse, a sorrel Fox Trotter ridden by Arch, Kathleen encouraged him work on turning the horse when it broke the gait from walk to gait. This was not the “yield the hindquarters” turn I had learned in my bucking course. Yielding the hindquarters always struck me as an attempt to ride the brake. Instead, this was just a relatively small circle, maybe two meters or so. What was critical was it didn’t mean that the energy of the horse was cut off. It gave it somewhere to go. These were just small circles, not tight, nose-to-tail circles, just small. Over and over. Never forceful circles. Never yanking on the mouth. Just steadily asking for circles until the gait came back down.

Kathleen: “Remember, energy can not be created or destroyed. It has to go somewhere.”

By the end of the hour the horse was walking on a loose rein. He had walked into the round pen pushing right through the bit.

“You have to master the walk,” she said. “It’s the most important gait.” This would be a lesson that I really needed too...

Lou (who had organized the clinic) came in on Skoal, a lovely sorrel Fox Trotter. Lou is quite a trainer, very experienced, and Skoal needed every bit of it. He would get quite nervous, had reared, and had a Freeze then Panic approach to life.

He shuddered at being patted. He twitched. He worried. He needed a good deal of ground work, but at the kennel there’s little time for a well developed ground work program.

Kathleen explained that it was still what Skoal needed. One thing about Kathleen. She has no interest in short shrifting horses and has a way of silently letting you realize that that is indeed what you are proposing to do. She did this a number of times, with me, with other riders, because it’s something we do without realizing it. We are so often not taking the time it takes to do it right, in horse time. Even trainers are “getting by” with things, she said many times, things that eventually melt down because we didn’t really do what needed to be done. Because trainers can ride those problems, they do, rather than fix them.

They worked on desensitization, watching how Skoal responded to pressure and realizing that he’d need some serious confidence building. Skoal needed an environment where things went right more often, to build up the confidence for when things went wrong.


Soon: Diego, The big gray and side passing, and day two...

Thanks for these write-ups - they're great and very informative! Directing the energy does work much better than trying to constrain it - Maisie and I have done a lot of work on this. Love the "Toyotas"!

I know that stomach-sinking feeling when one of your companions has suffered unintentionally by your hand. The guilt is awful. But, you now know that Cibolo has a tender back and you will be doing something to ease his pain. This injury can get better and he will make a complete recovery. It's hard to decipher all the information you get regarding horse care. Don't be too hard on yourself.

I always figured that if you get one thing out of a clinic that sticks with you and fits your style, it's a good clinic.

Hello! Saw you have been checking out my blog at horsetalkindiana.blogspot.com and wanted to check in with you. I could relate to this post -- I know what you mean about conflicting information...you hear so much from so many different people. Also, we have a "Toyota" horse, but John (my husband) and Zora (the horse) have come to an understanding and work with each other....I will be following your blog....

I'm glad you've found a clinician that 'speaks to you'. Don't be hard on yourself, because like you said, there is so much conflicting information, it can be overwhelming.

It's a lot like parenting styles and information. Sometimes you really just have to trust your instincts...and your heart.

I am trying to catch up!

I feel your distraught heart in knowing about causing back troubles or your horse...it took me a while but- I had HELP from an expert to get to where I am now with my mare.
( Miriah Stuart-Equine Therapist)

Micro movements the right way, while riding and lunging in between with a helpful devise that made my mare want to stretch down and create muscles upon her top line.
( Muscle memory)
Having those there got me on her more and more without harm.

The clinic sounded good and eventually all the info from them and all others giving you input-will settle into the truth for the good of your Cibolo. Everyone believes what they tell you to be gospel...of course they do-they use it too...but they may be wrong... for you and Cibolo.
I know, I found out with my sensitive mare. I had to listen to her more and them less...while reading up on fundamentally correct riding habits.

The Dressage "training scale" is really a good foundation for all disciplines- without the core basic of it...you will go nowhere fast!

If you study each one, individually so...you will get it right with practice..and go far and anywhere you want to go!

I know I am one voice in a myriad sweetie. I have been where you are and wanting to be where someone else is with their horse. It WILL come together...please take you time!
KK