Solo ride, a bad hoof, and a pregnant mare... 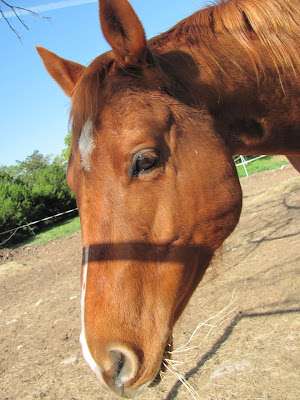 Cibolo, with his "you can't catch me" face.

After ANOTHER game of chase the horsey (SIGH), we saddled up headed out from the barn.

Cibolo is very, very slow right now, which I attribute to his new barefootness - I know he's tender and he's reluctant to hit the road. He gravitates to the edges, which I accomodate as much as I safely can. But his hoof wall is still a mess and he's not too thrilled to head out. I'd say he was barn sour, but he's even slow on the way back.

I was pretty thrilled that he crossed threshold after threshold without balking. We haven't been out alone in over a month and he kept going without a hitch. We were taking a new route to a pond area, and he crossed barking dogs, junked boats, weird rusted metals and only really had an issue getting close to one building.

We came back up the hill and he called out to the horses in a different stable. I didn't worry about it this time. Last time I felt like it was a sign he wasn't listening, but the ride and his responses were perfect. So I figured he was being social.

What do you think?

Back at the barn I met our farrier and she looked over their hooves. The hoof walls are still really bad and she suggested boa boots. I'm switching from saddle shopping to boot shopping now. Any recommendations?

I was most worried about Lily. Here's some pictures of her left hind. 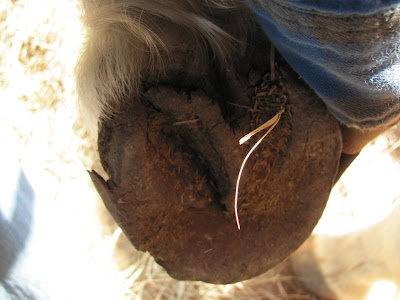 The farrier trimmed it, then put some sort of plastic adhesive. It looked like rubber cement. It's there to protect the hoof while the wall grows out. I'll get pictures of that later.

Heather was headed to auction when the BO came and got her. She's a OTTB who had no desire to race. She's bred with a champion Aldalusian.

The baby will be an Azteca. 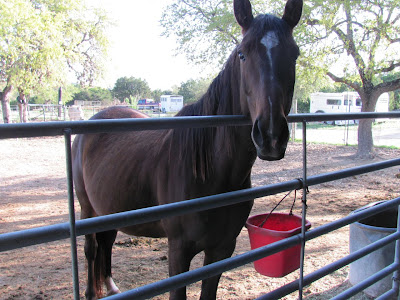 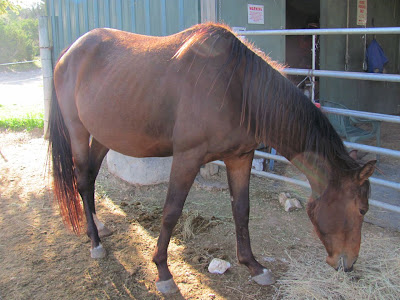 Hope you had a horse filled Saturday...
Typed in a hurry by Unknown
Email ThisBlogThis!Share to TwitterShare to FacebookShare to Pinterest
Labels: hooves, mares, trail riding

My advice is still to add kelp to your horse's diet to strengthen their hooves. Minerals are really important since most food, including hay, is grown on depleted soils. You WILL see a difference, stronger hooves and overall health.

Nice you got to go on a pleasant ride.
Nice save on the OTTB, best wishes to her and her foal

I sure hope their hooves improve. My horses have always been barefoot and have the best hooves. I guess I've been lucky.

How exciting that Heather is due so soon. Please keep us updated.

I have both easyboot gloves and renegades. Love them both, especially the cool colors the renegades come in. But I like the gloves best for easy on and off, secure fit, and the horses adjust to them really fast. Also, the gloves will fit securely right after a trim and right before a trim because of the slight give to them. Carmon

Lyle wore hoof boots on his front feet for a couple of years - I used the Old Mac G2s, and I swear by them. Here's a link to a post I wrote about them, if you're interested.
http://www.the7msnranch.com/2008/06/these-boots-are-made-for-walkin-and.html

I keep my horses barefoot. They do very well.

Heather is lovely. I've never heard of Azteca before. I bet it will be a beautiful foal, though.

I'm glad you were able to get Cibolo out on the trails alone. Sometimes I like to ride alone, too. I've not done that with Apache yet. I think she would do ok, but after what happened to me, I'm still wary of stepping out too far from the safety net of other people. In time.....
He sounds like he did well, though, and that's what matters, right?

Baby Doll went barefoot and had hooves of steel. Apache is barefoot, but needs time to toughen up, but she's getting there. I think I'd still like a pair of boots, though, for some of the rockier trails we might encounter.
I'll be interested to see how the boots you choose work out for you.

I bet he'll be happier in boots until his feet get adjusted to being barefoot - I'll bet that's what the hard-to-catch stuff is about. Glad you got out and around!

I love riding alone, and it's good if you are trying to get your horse to look to you as leader and not be looking for his herd all the time. If Beamer calls out to his herd, I make him work harder (not faster!) If he is really good, I reward him by riding over to the mare pasture and let him just stand and gaze contentedly at his girls; if he talks to them while we do that, he has to work again- sidepass a box, back up 20 feet, or whatever.