Clinic - part 3 of a whole bunch

The rain made for muddy paddocks... 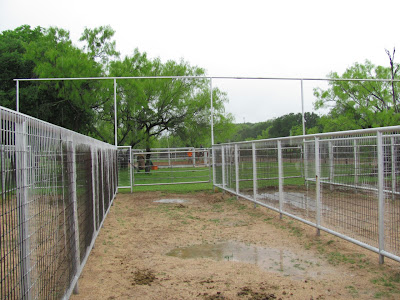 First, more on saddle fitting. Someone asked me why a gaited saddle seemed the right kind. Actually, it wasn’t the one recommended at first. At first I was trying a Meleta Brown that Kathleen said seemed to work better for this new, stockier generation of quarter horses. It was the only one of all the mass produced saddles she recommended because of the tree. Every other “production” saddle was built on the same tree, so no matter if I was looking at a Circle Y or a Tucker, I’d likely run into the same problem. The Meleta Brown is on a different tree though, one that is convex, with a flair to the shoulder.

Lou had one and we tried it. It fit much better, but I still thought it fit tighter in the shoulder the the pressure wasn't even. Improved significantly, but still not quite correct. But probably the best I'd get in a production saddle.

I learned that there shouldn’t be any uneven pressure from the bars of the saddle and merely a wide gullet won’t do. According to Kathleen, the traditional quarterhorse tree is like a plank – basically a straight line from shoulder to hip – or pretty close. It was made for quarterhorses of 100 years ago.

Only problem - quarterhorses have changed a good deal as we've bred for a very different horse. So while you *can* make room for the shoulder by getting a wide gullet, that doesn’t take into consideration what happens along the back. In fact, it makes the tree really only fit in two places – the shoulder and the back. Or if it doesn't fit on the shoulder, it's likely to slide backwards, and really compromise your horse's back since he'll be carrying you in the area not over the rib cage.


A gaited tree, on the other hand, has a significant flare at the shoulder, and some at the hip too. Cibolo has big shoulders and a big butt. I suspect that this is why this tree is so much better.

I had still been considering the Meleta Brown when Peg, after the trainer left, showed me a saddle she got on ebay. “You don’t have to buy an expensive one,” she said. She encouraged me to try it.

I was pretty new at this saddle fitting, but I had to say, it fit perfectly to me. Later I asked Lou’s sister Catherine and Kathleen and they were surprised. It was like it was made for him. In fact, you could get in the saddle without tightening the cinch. And when we rode around for a minute, the saddle didn’t move at all. It was remarkable.

Here’s the website I’m shopping, the model she had is the Tennessean (initially we thought it was a crates, but National Bridle went out on their own some years ago). They have their own, exclusive tree. Thanks to Peg I have an option that’s not going to run me 2k. I’m hoping to buy one some time soon.

Our next horse: Diego, AKA, I got your number

It was when Kathleen worked Peg’s horse Diego in the round pen that I got the first training answer I’d been looking for – what is appropriate and effective intensity with horses. I did not want to have to become a witch, but my brand of firmness wasn’t working. I was missing something.

Diego was a beautiful gaited spotted saddle horse. He had tossed Peg during a buck and she’d broken her ankle. He could be pushy on the ground and was pushing her around a bit in the round pen by doing scary things – like rushing her.

Kathleen took over the round penning.

One of the things I watched was how Kathleen upped the pressure without upping the emotion. He turned with his butt to her, for example, and she brought that rope into a whirling snapping form. He nearly jumped out of his skin in response. You could tell no one had gotten after him.

And yet there wasn’t any meanness or even aggressiveness in her approach. She was firm, but firm like a tree is when you push against it. She didn’t cut Diego slack when it was clear he had no clue what she wanted. She let him figure it out, and her intensity and consistency made him very motivated to try all kinds of things. The second he did the right thing – change directions by turning in to her instead of with his tail to her – she backed way, way off.

It took a while, but she didn’t baby him, didn’t make excuses for him, didn’t try to guide him much more than the clear signals she was giving. He had to figure it out through trial and error.

“We aren’t doing these horses any favors by trying to avoid freaking them out,” she said.

She kept asking for the same thing, in basically the same way. The pressure would only stop when he figured it out. Because horses will keep trying to figure things out.

Now she knew he was a pushy horse and could handle some pushing. With Skoal, she’d never gotten this intense – but he’d been already working hard at a tenth of the pressure.

Which is why there isn’t one way to work a horse.

Now sometimes a horse will get stuck. They will keep offering the same thing while they are in “Tahiti” mentally (they imagine themselves elsewhere and just have their body go through the motions. Ever work with one of those people? LOL).

In those cases she’d do something alarming to the horse, like tossing a rope out toward it’s hind quarters, slapping her rope to her side, something to jar it. But never getting aggressive.

Eventually Diego turned into a model citizen in the round pen. But it was lots and lots of wrong turns, Tahiti moments, and a few jarring moments. He softened, listened, and followed Peg’s directions when she took back over.

So what I was missing was persistence, without emotion. Staying flat - or, as I came to see it, centered within myself - was what was the missing element.

Today I used a few lessons from that in the round pen – and even more when I was loading Cibolo when we went to the vet.

More tomorrow – it got late on me.

Have a great day!

Typed in a hurry by Unknown
Email ThisBlogThis!Share to TwitterShare to FacebookShare to Pinterest
Labels: clinic report, round pen, saddle

Really interesting. Thanks for sharing, and the saddle fit explanation. Hey- you still have time to put in a new guess on my foaling contest; as of this morning Belle hasn't foaled yet!

I can see myself getting in trouble on that website you're shopping. ;) Sounds like you're getting a lot out of this clinic - that's great!

I have so much to learn.

thanks for writing all this up, and sharing it with us. Fascinating and informative. Your brain mustve been overflowing when you got home. xo

Sounds like you had an AWESOME day. I love it when a plan comes together like that!

Question: Why does it matter how big your horses' butt is? The end of the saddle stops way before the hip, or it should anyway.

Sounds like you're having a lot of light bulb moments, and that's really great!

Don't be too hard on yourself! We have all made mistakes because we didn't have all of the info we needed yet. Now you know that your horse is honestly telling you how he is feeling which means a greater level of trust between you both. Carmon

That was excellent...and right now, my PBO and I are shopping for saddles! She will need a western, and I simply want an endurance type.
Her Morgan's are wide and plank like..and maybe what you have described, may work for them. A gaited tree tree .They also are short backed . Maybe like a QH...one big ol slab of horse!
Thanks for the info and how well you displayed it all...very nice~
KK