Clinic - part 4 of a whole bunch 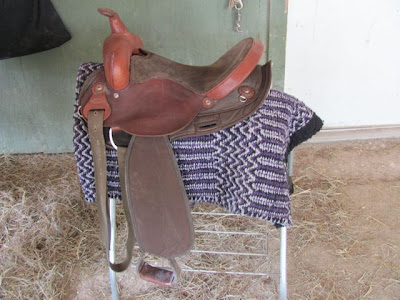 My favorite saddle, now for sale on craigs list

The Gray and the Long Way to the Side Pass

The final horse of the first day was John's beautiful gray. This Nebraska born Fox Trotter was a gorgeous horse - very "baroque" in style, I was told. I think of this as meaning Rubenesque in physique - thick neck, huge shoulders, stocky build. The kind of horse you'd see in a medieval tapestry. A line backer of horses.

And the best mental condition of any horse there. Like many of the gaited horses, this one was a bit of a Toyota too, but what John wanted to do was work on side passing.

I was interested in this because we haven't been able to get Lily to side pass. I suspect she can, but maybe as a barrel horse, side passing is way down the training list.

Many articles I've read talk about teaching the side pass in front of a fence. But Kathleen noted that you just end up teaching the move twice, because as soon as the obstacle is gone, then so is the move.

Instead she focused on freeing up all four legs.

I have to say, I was surprised how long it takes for a horse to "get" this move. And this was one very smart horse. But side passing is very complex, apparently.

First she focused on cueing and getting the horse to turn on it's back end. She did this by encouraging John to back the horse to get it on its back end, then put it into a turn. In time, the Gray shifted his weight and in about 30 minutes he was turning fairly reliably. With the front freed up, it was time to move around the front end. This took much more time. I'm not sure if it was because this horse was very forward by nature, or if it just found the cues confusing.

By the end of the hour, the Gray was only marginal on the front. "Usually we just do one turn a day," Kathleen said. But she felt this horse and rider were advanced enough to give it a try.
You could see the wheels turning in the Gray's mind. It seemed like it had been some time since he had to really puzzle something out and while he was very willing, he was also having a heck of a time "getting" it.

The next day, John would work on tieing the two moves together. That's when things really came apart, and the calm Gray decided to bite. But that will be a tale for my next set of posts.

I won't write about my surreal round penning work, because I haven't written about that point in the clinic yet. But I am confronting one big problem and one small one.

Cibolo is still being a pain to catch, but it's getting less and less difficult. I had sort of hoped we'd be totally done, but I guess that's just not realistic. And this weekend I hauled him even though I wasn't going to ride him. He had been unraveling his trailering skills and I wanted him to adjust to getting out more often. So when we went to my friend TR's place, I took him, although I would be riding another horse.

Here is me and Sierra - I didn't have my helmet, because my daughter's head has grown and doesn't fit in her kids helmet anymore. So she got the helmet. That's motherhood in action. Thanks to TR for a great photo! (I'm on Woody, TR's wonder horse who I just adore). 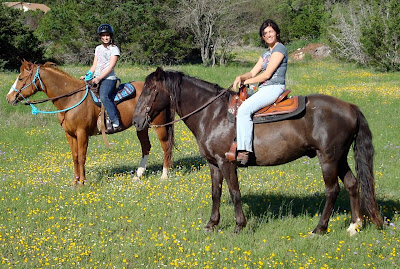 When Cibolo was reluctant to load on the way home I gave him three firm taps on the butt on the lunge line. Then when I offered him an opportunity to load, he got right in without the two steps in and out dance routine. I realized I had been giving him a few too many options and darn it, this horse knows how to load. He just forgot - as did I - that I was serious about him getting in.

And I did it without the emotional impatience. It was flat, but it was firm.

That lesson from the clinic is slowly soaking in...
Typed in a hurry by Unknown
Email ThisBlogThis!Share to TwitterShare to FacebookShare to Pinterest
Labels: clinic report

I look forward to hearing more about the clinic.

I think it's really people that need to learn how to load them, don't you?

Great photo! Sounds like a very interesting journey for you and definitely one that you're getting a lot out of.

It's great to see you and your daughter riding together...in a field of pretty wildflowers no less.
Is Woody a mustang? He has that 'mustang-look'.

More about the clinic! I want the information without spending the money! Ha!

It was great ride, and the wildflowers were awesome. 4 riders went out and 4 riders came back - that's the best kind of trail ride.

I don't know what Woody is - I've heard Azteca, grade QH, Missouri Fox Trotter, even Morgan. He is NOT gaited. What I DO know is that he is a great older horse, that is super-broke and safe for beginners. He has NEVER offered anything stupid, and he has incredible endurance. And when ridden by a more experienced rider, he will side-pass, yield front and back end, and canter all day long. He is not for sale EVER at ANY price - one of those kind of horses.

Nice to see you smiling in the sunshine!
So often our emotions get in the way when we are dealing with horses. I try to use a "matter of fact" attitude when I'm working with them, especially training young ones.