Lily and Cibolo and the Near Colic

There is so much to say, so much to catch up with. There were the wonderful people, the miserable rain, the crushing feeling of disappointment, the laughter, the learning - so much, so much.

And I will catch up with that, report on the clinic and tell you about it all.

But tonight, I am much too distracted by the night's events.

Because tonight, Cibolo would not eat.

I arrived at the barn just before feeding time to drop off my clean and re-organized trailer. Everyone was there and we visited while I took Cibolo out and began the process of learning to put on his very, very pink boots.

He seemed bright and happy to see me. He was still in the stall, since he is on bute (which is part of the story that will come later), I didn't want him to hurt himself dashing around the paddock. I put his grain in a bucket, gave him some hay. I finished unpacking, then worked on putting his new boots on. Then I gave him his final bit of bute and prepared to take him for a walk.

That's when I noticed he hadn't eaten.

Hmm, I thought. Maybe it's early.

As if *that* has ever slowed him down.

I walked him around in his pink boots, and after a few dancing steps he settled into them. I offered him a chance to graze. He passed. Was it the boots? Were they too weird?

I brought him back, took off the boots. He still didn't eat.

Maybe he doesn't like the bucket I'd hung the grain in, I thought. It's kind of torn and might feel weird because it's hanging a little high.

I put him in a stall, noticing the change in his face now. He didn't seem bright anymore. I dumped in his grain. He ignored it. He walked away and dropped a small load of manure. He walked around slowly, then rolled.

Then he did it again. He rolled, but more slowly, reluctantly.

My heart sank. Cibolo began pawing the ground. Then he'd lie down and get up. I listened to his belly. Nothing.

With Kelly and Davy's help, I gave him banamine and called DH. DH said he'd be right over.

Then I started walking Cibolo. His head was low and he walked closer than normal, as if he was distracted internally. When we'd stop he'd lean in slightly for a pet. He put his muzzle to the ground halfheartedly, but it was as if there was nothing appetizing within reach.

After a few minutes I wandered over to the area just the other side of the paddock where Lily is. There's a big field there, and it's a place we've hand grazed before. Surely there would be something he could eat in the field.

Nothing. Cibolo would nuzzle around with despair. Then I heard a call from one of the horses. I was shocked to see it was Lily. She was staring right at him, walking toward the fence.

Lily NEVER calls to Cibolo. Never. I've hand grazed him in this area half a dozen times and she never calls him. I've grazed her near Cibolo and he never calls out to her.

But there she was, staring straight at Cibolo, stepping as close to the electric fence as she could. I walked Cibolo closer to her, and could tell she wanted to touch noses. I didn't want her to get shocked, though. I remembered that at the gate to her paddock there was no wire. 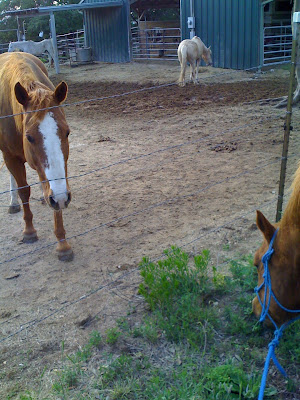 Lily walked alongside us, looking directly at Cibolo, even though she was leaving her own piles of hay behind. This never happens - she's usually back to her own group after a cookie check - if we even get that.

After a while, I snapped from my surprise and pulled up some grass for her. Lily nibbled on it as Cibolo continued to chow down.

After 15 minutes or so, I put Cibolo back in his stall and he began to eat his grain. I could hear his belly sounds. I left him to his food and went to give Lily a little something special. 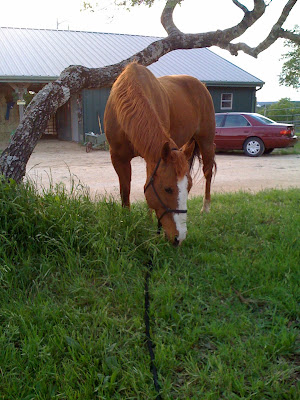 As of this moment, Cibolo is doing fine. He has passed several good ... piles, and looks fine.

And Lily looks like more than a good horse. A lot more.
Typed in a hurry by Unknown
Email ThisBlogThis!Share to TwitterShare to FacebookShare to Pinterest
Labels: colic, herd

colic. >shiver< I've only had to deal with it a couple of times, but it scares me to death.

Three cheers and some extra carrots for Lily.

How scary! So glad that Cibolo is doing fine now!!

I hope you find out what it is and that Cibolo gets to feeling better real soon.

You might onsider having him checked for strongyles. Remember my bouts with Jaz? Resistance spreading in Texas? What you are describing is exactly how he kept acting. It took a full rectal exam and sonogram to find it. The good new is, if that IS what it is, it is treatable.

So glad he's OK - that must have been scary. And Lily - what a prize!

What an amazing story. I'm so, so glad it had a happy ending. Some serious wows for Lily - how in the world did she know?

I'm glad it was nothing worse.
Horses have a way of knowing when something is wrong, don't they?

I hate colic! Nice that Lily helped Cibolo out. Amazing how horses know when another is in distress and needs them.

Colic?! Just the word makes me nervous. I am so glad that Cibolo is feeling better. And a big YAY! for Lily for being there for him.